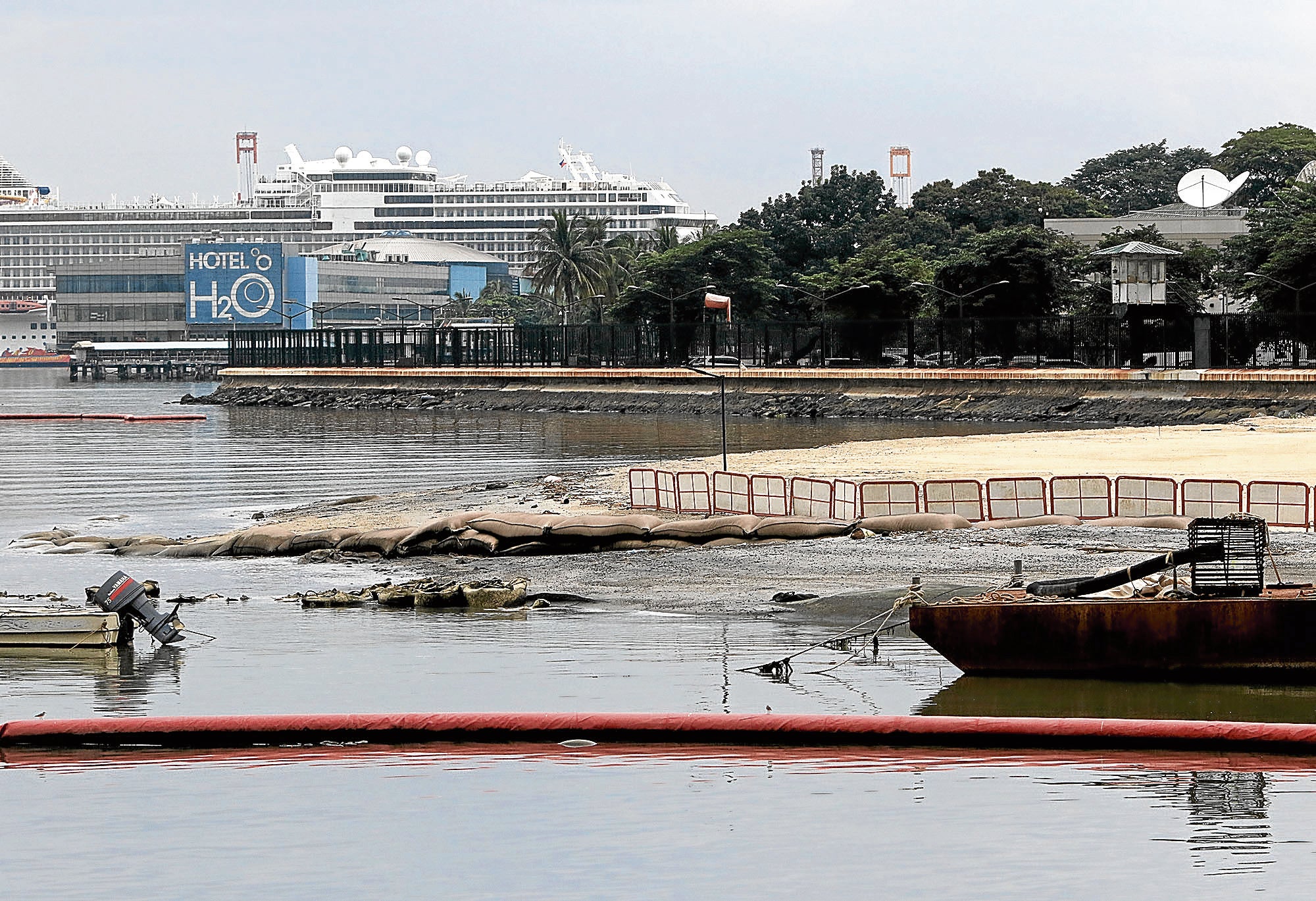 TRUE COLORS The natural gray sand of the shores of Manila Bay can be seen at the edge of the artificial “white sand” dolomite beach adjacent to the US Embassy in this photo taken on Thursday. Planting mangroves, instead of the expensive and “even more detrimental” beautification project, was the correct way of helping rehabilitate the polluted bay, according to the University of the Philippines Institute of Biology.—RICHARD A. REYES

Instead of overlaying Manila Bay’s shoreline with crushed dolomite rocks, the government should invest in rehabilitating mangroves as part of the solutions to its woes, according to scientists from the University of the Philippines (UP).

In a statement, the UP Diliman Institute of Biology expressed its willingness to assist the Department of Environment and Natural Resources in forming and implementing a science-based rehabilitation program for the heavily polluted bay. This program, it said, would target the recovery of the bay’s biological functions and services by restoring and protecting key habitats, reducing pollution and managing invasive species.

“January 2019 was declared the official start of the Manila Bay rehabilitation program, which had three phases, namely cleanup/water quality improvement, rehabilitation and settlement and education and sustainment,” the institute said on Monday.

“The recent project involving the use of dolomite sand does not address any of these,” it said.

The project is “even more detrimental” to the existing biodiversity, as well as communities in the area, the institute said.

The UP scientists were the latest to oppose the government project which involved the overlaying of crushed dolomite rocks sourced from Cebu province along a short stretch of baywalk near Roxas Boulevard. Government officials, including President Duterte, have welcomed the P389-million “beach nourishment” project, but environmentalists have called it an expensive beautification effort that will not solve Manila Bay’s persisting problems.

Among those who will suffer from the costly project are the migratory and resident waterbirds that use the whole stretch of the bay as their feeding, resting, roosting and breeding areas, according to the UP Institute of Biology.

“The dumping of dolomite in Manila Bay has effectively covered part of the intertidal area used by the birds, thereby reducing their habitat,” it said. “Any habitat reduction or loss will reduce opportunities for migratory birds to feed and refuel on their migration journey.”

Mangrove rehabilitation, on the other hand, is a cheaper nature-based solution that can contribute in biodiversity conservation and in climate change adaptation, the institute said.“Having ecologically healthy mangroves will also help lessen heavy metal contamination, a condition that beset Manila Bay for a long time,” it said.

“The recent effort of dumping dolomite sand on a reclaimed part of Manila Bay is not the best way of spending government money; a critical resource during the pandemic that could have been put to better use by spending for the needs of medical front-liners and the millions of our hungry fellow Filipinos,” it added. —JHESSET O. ENANO