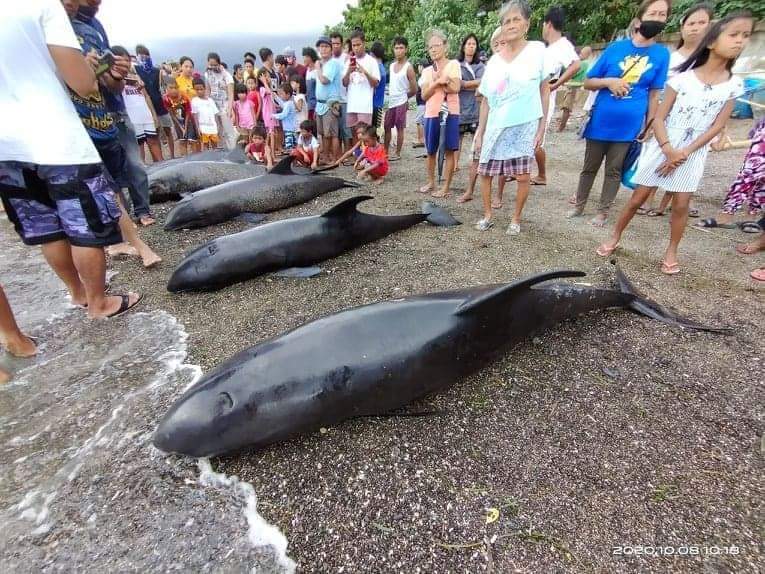 Villagers gather around the carcasses of nine melon-headed whales that washed ashore after the mammals were believed killed by shock waves from blast fishing at the Lagunoy Gulf. PHOTO BY NONIE ENOLVA/BFAR BICOL

LEGAZPI CITY—Nine dead melon-headed whales, believed to be victims of blast fishing, were washed ashore on Thursday (Oct. 8) at a coastal village in San Andres town, Catanduanes province, according to a fisheries official.

Nanie Enolva, spokesperson of the Bureau of Fisheries and Aquatic Resources (BFAR) in Bicol, said the dead whales were found by villagers around 10 a.m. at the village of Bonot. 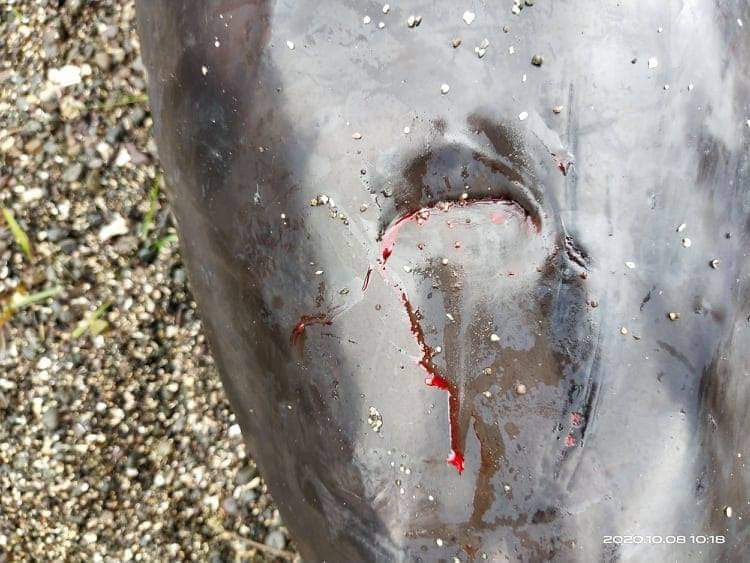 Wounds on their blow holes are visible on the carcasses of the nine melon-headed whales that turned up dead on the shores of a Catanduanes town. PHOTO BY NONIE ENOLVA/BFAR BICOL

In a phone interview, Enolva said the whales’ behavior was consistent with acoustic trauma as they swam in the water with their heads on the surface.

Enolva said shock waves from blast fishing at the Lagunoy Gulf was the likely cause of the whales’ death as it caused their lungs to collapse.

A BFAR report said some of the whales were nearly 3 meters long while the others were smaller.

Enolva said the mammals were among 70 melon-headed whales being monitored for mass stranding as a result of widespread blast fishing in the area.

“Mass stranding happens when these mammals are found close to shallow waters and are at risk of being stranded,” she said.

Enolva said blasting creates shock waves that could cause whales to lose their balance and coordination while swimming because the mammals are known to keep an upright position at sea to breathe on the surface.

Asked to cite other cases of mass stranding, Enolva said 300 melon-headed whales had been stranded in Bataan province in February 2009 as a result also of blast fishing.

In Bicol, Enolva said about three cases of stranding occurred. One was recorded in 2018 when eight dolphins were stranded in Tinambac town, Camarines Sur province.

Records from the Philippine Marine Stranding Network said Bicol had a high number of mass stranding in the last three years because of blast fishing, making the region a hot spot for dolphin or whale stranding.