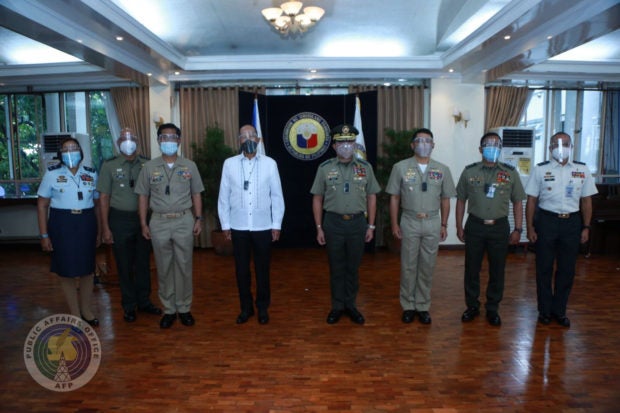 Armed Forces of the Philippines (AFP) Chief of Staff Gilbert Gapay Jr. (5th from left) has been promoted to the rank of general on Wednesday (Oct. 7), more than two months after assuming the post. On his right is Defense Secretary Delfin Lorenzana. AFP PAO

MANILA, Philippines — Armed Forces of the Philippines (AFP) Chief of Staff Gilbert Gapay Jr. was promoted to the rank of general on Wednesday, more than two months after assuming the post.

He received his fourth star in donning ranks of a ceremony presided by Defense Sec. Delfin Lorenzana at the Department of National Defense headquarters, the AFP said in a statement.

Gapay assumed his post as AFP chief on Aug. 3, the eighth under Duterte’s administration. The Commission on Appointments confirmed his promotion last Sept. 2.

Military honors were accorded to Gapay at the GHQ Canopy at Camp Aguinaldo right after the donning ceremony, the AFP said.

Gapay is set to retire in February 2021.