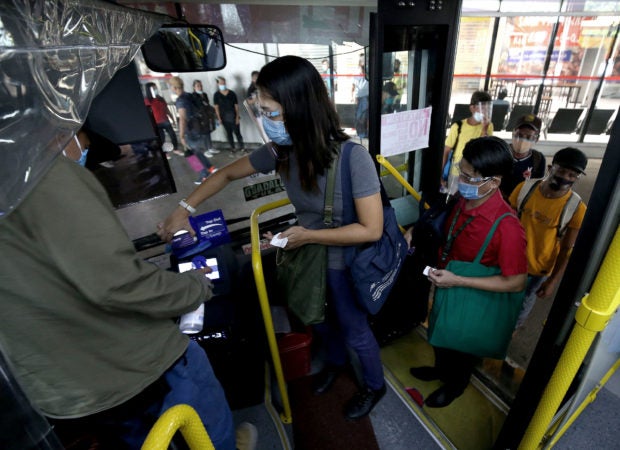 NO BEEP CARD, NO RIDE POLICY / OCTOBER 1, 2020 Passengers use beep cards to pay on EDSA Carousel buses in Paranaque Integrated Terminal Exchange in Paranaque City. Starting October 1, 2020, the terminal will strictly implement the ‘No Beep card, No Ride Policy’ to minimize physical contacts as part of precautionary measures against the spread of COVID19.
INQUIRER PHOTO / RICHARD A. REYES

Presidential spokesperson Harry Roque said the President sympathized with indigent Filipinos who had been caught unawares when the cashless payments in buses was implemented.

(From what I know, the President is against the charge for a beep card.)

(The President sympathizes with our countrymen who were surprised because their money was only enough for fare and food for that day.)

Many commuters lamented the sudden implementation of cashless payments in buses where fare cards or beep cards were sold for P180, or P100 for the card and only P80 load.

This prompted the Department of Transportation to suspend the mandatory use of beep cards.

(The suspension of the beep card use altogether is proof that the government is listening and this administration has a heart.)

Asked if the government is willing to shoulder the fee for beep cards, Roque said the DOTr is studying the matter and noted that the suspension of its mandatory use would be “enough” for now.

(I think that’s enough to address the immediate issue of more burden to our countrymen who are already having a hard time in the middle of a pandemic.)