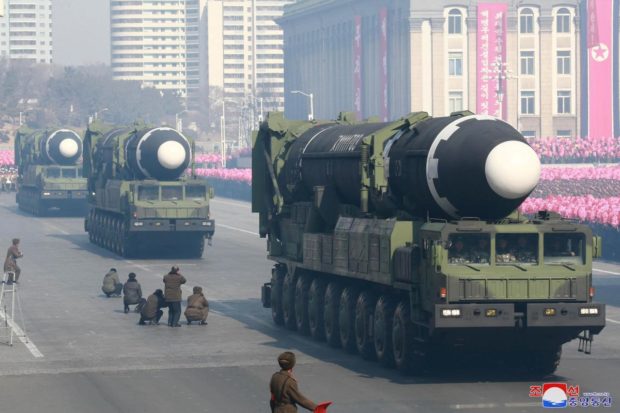 Intercontinental ballistic missiles, Hwasong-15, are seen at a military parade marking the 70th founding anniversary of the Korean People’s Army at Kim Il-sung Square in Pyongyang in February 2018. KCNA-Yonhap via The Korea Herald/Asia News Network

SEOUL — South Korean and US intelligence have spotted North Korea moving an intercontinental ballistic missile, along with four mobile launchers, at an auto plant on the outskirts of Pyongyang, a Seoul official told a local media outlet on Saturday.

“The missile is larger than the one they fired in 2017 and we believe they would showcase that at a military parade on Oct. 10,” the official said. North Korea fired its first ICBM, Hwasong-15, in 2017 and appears set to stage a show of force on the founding anniversary of its ruling party.

Speculation continues mushrooming over North Korea’s unveiling of a more advanced ICBM, with some experts expressing reservations, as the isolated country could not have mustered newer technologies without outside help under the UN-led sanctions.

The Seoul official added Pyongyang could unveil a newer submarine-launched ballistic missile as well as an enhanced submarine, pointing to intelligence that picked up signs of the activity involving the latest development at the North’s Sinpo South Shipyard along the east coast.

“North Korea’s KN-23 and KN-24 missiles are no better at evading detection by long-range radars than their Scud-type counterparts,” Michael Elleman, nonproliferation director at the International Institute for Strategic Studies, wrote on the website.

He was referring to Pyongyang’s short-range ballistic missiles being intercepted by and Seoul’s anti-missile shield layered with the Patriot and Terminal High Altitude Area Defense systems.

Seoul maintains a missile defense network where the Patriot detects missiles flying at low altitudes and the THAAD takes down ones at high altitudes. The THAAD has much longer-range radars than the Patriot to track missiles.

The short-range missiles, flying at low altitudes, are launched outside the range the Patriot identifies incoming fire, but the THAAD can cue the Patriot to scan where the threat is suspected to appear on the sky so hostile fire is thwarted, according to Elleman.

But those missiles can maneuver throughout their entire trajectory, potentially impacting the interception process, he added.