Aquino on Llamas’ DVDs: He could’ve been just passing by | Inquirer News

Aquino on Llamas’ DVDs: He could’ve been just passing by 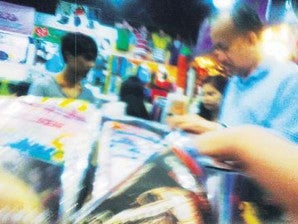 STA. ELENA, Iligan City—He could just have been “passing by” the mall, President Benigno Aquino III said of his controversial political adviser who was photographed apparently purchasing pirated DVDs, amid an outcry for Ronald Llamas to be either sanctioned or fired for violating the law.

Mr. Aquino said he would have to first ask Llamas what he was doing at the Circle C mall on Congressional Avenue on Monday night.

“Because the picture I saw in the Inquirer showed that it seemed he was just passing by. I really do not know if these were DVDs—or I assume they are DVDs,” he told reporters here at the launch of a government housing program for victims of Typhoon “Sendong.”

But even if an explanation is awaited from Llamas, the President made it clear that the controversy involving his political adviser was “not my No. 1 priority.”

“You know that we have so many problems. That DVD (issue) is kind of low on our [list of] priorities,” Mr. Aquino said, listing his priorities as the recent bomb blast in Makati City, the killings of fishermen in Zamboanga province, and the crisis in Iran.

Dona Policar, an associate editor of Bandera, the Philippine Daily Inquirer’s sister publication, witnessed Llamas’ purchase of what turned out to be P2,000 worth of DVDs in one of the stalls at Circle C mall.

Llamas was accompanied by his two bodyguards when he made the purchase of the illegal merchandise, in violation of the Anti-Piracy Law and in the face of a government drive against film pirates in a bid to be stricken off the international “piracy watch list.”

This is the second time Llamas has found himself afoul of the law. Last October, police investigators discovered an unlicensed high-powered assault rifle inside his car which had figured in a road accident.

Llamas was abroad at the time. His car was being used by his security aides but questions were raised as to why the President’s political adviser should arm himself with a powerful weapon. Police cleared Llamas of any criminal liability but charged his security aides with illegal possession of firearms.

As in the incident of the firearms case last year, the President was in no hurry to condemn Llamas, invoking due process in behalf of his political adviser.

“Ask him questions first. This is the accusation against you, what is your answer? From there, we will go to what is in the rules, regulations and laws but there is a process that one has to go through,” he said.

Last year, Mr. Aquino came to Llamas’ defense, saying that the nature of his job in Malacañang necessitated his having to carry a high-powered gun.

But other Palace officials were for letting Llamas do the explaining himself. “We would rather let Secretary Llamas explain his situation,” said presidential spokesperson Edwin Lacierda.

The House minority on Wednesday called on Llamas to resign and spare Mr. Aquino the necessity of having to defend his shooting buddy.

Minority Leader Danilo Suarez said it was about time Llamas quit the government after being a constant source of embarrassment to Malacañang.

“Llamas has been setting a bad example to the public which is contrary to the President’s daang matuwid advocacy,” said Suarez in a press conference.

“I think he should resign to spare Malacañang embarrassment and at the same time, there will be fewer leftists in government,” said party-list member Pastor Alcover (Anad).

Earlier, Optical Media Board Chairman Ronnie Ricketts said his office cannot do anything about anyone buying pirated DVDs as the Anti-Piracy Law does not impose any penalties on the customer.

Suarez said while Ricketts, whose office is under Malacañang, cannot be expected to act on the matter, the Intellectual Property Office can file the appropriate charges against Llamas.

“He is not above the law. This is not the first time that he was caught violating the law, the first time was illegal firearms and now it’s pirated DVDs,” said Malolos Bishop Jose Oliveros.

“President Aquino must sanction him,  the law must be implemented,” Oliveros said.

Sorsogon Bishop Arturo Bastes said Llamas must be charged “for giving a bad example” to the people. He must either resign or be sacked, he said.

“His credibility is already eroded and has become a negative factor in President Aquino’s administration,” said Bastes.

But Archbishop Emeritus Oscar Cruz is sure the controversial Llamas will again be let off the hook.