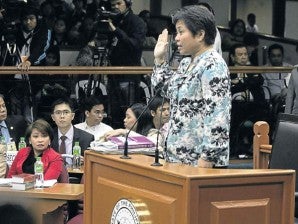 The year Chief Justice Renato Corona supposedly bought the classy 303.5-square-meter penthouse worth P14 million in The Bellagio in Taguig City, he paid a withholding tax of P155,556.20 and earned a gross income of only P621,528.62.

Another senator-judge from the Liberal Party had to stand up to elicit this information from a witness on Wednesday.

This time, a seemingly impatient Senator Ralph Recto raised his hand and began asking Kim Jacinto-Henares, commissioner of the Bureau of Internal Revenue, about Corona’s tax payments at the height of a verbal tussle between defense counsel Serafin Cuevas and private prosecutor Arthur Lim.

In a series of questions to Henares, Recto elicited figures on tax deductions from the so-called “alpha” lists that government agencies and private companies submit detailing income tax deductions of their personnel after Lim failed to extract these because of defense objections supported by Senate President Juan Ponce Enrile, the presiding officer.

Cuevas questioned the relevance of the presentation of a so-called alpha list the Supreme Court provides yearly to the BIR.  The list details the income earned by “local employees” of a government office as well as the withholding tax taken from their salaries as provided by Section 51 of the National Internal Revenue Code.

Henares explained that since Corona’s compensation and withholding taxes are reported in the tribunal’s alpha list, he no longer had to file income tax returns (ITRs) like other taxpayers.

Lim explained that Henares was presented to the impeachment court to testify on Corona’s earnings from 2002 when he was appointed associate justice of the Supreme Court up to 2010.

Then outgoing President Gloria Arroyo named Corona, her former chief of staff and legal adviser, as Chief Justice in May 2010.

Henares was summoned to the court on Day 6 of the trial to provide copies of ITR declarations, but it turned out that Corona had not been filing these and she had no such documents. Instead, she said she had the alpha list.

Under Recto’s questioning, Henares said that in 2006, based on the alpha submissions, Corona’s withholding tax amounted to P109,706.60 on gross compensation of P465,597.

Recto later told the court he did not intend to aid the prosecution. “It pains me that the parties here seem not to understand each other.  That’s the only reason why I stood up,” Recto explained.

Last week, the defense panel accused Recto’s Liberal Party ally, Senator Franklin Drilon of “substituting” for the prosecution, and said it was considering filing a motion to get Drilon to inhibit himself from the proceedings for being biased.

Drilon last week prompted the Supreme court clerk of court, Enriqueta Esguerra-Vidal, to release Corona’s statements of assets, liabilities and net worth (SALNs) to the Senate although she did not have the tribunal’s authorization to hand them out.

At the start of Wednesday’s hearing, Enrile announced that in a caucus before the session, the senator-judges agreed to expound and introduce evidence on paragraphs 2.2 and 2.3 of Article 2, but not on 2.4 after the defense complained that the prosecutors were going on a “fishing expedition” in the course of the trial.

Article 2 of the impeachment complaint said that Corona committed culpable violation of the Constitution and betrayal of public trust when he failed to disclose his SALN.

Paragraph 2.2 of the grounds under this article states that Corona failed to disclose his SALN, as required by the Constitution. Paragraph 2.3 says that “it is reported that some of the properties” of Corona are not included in his SALN declaration in violation of the Anti-Graft and Corrupt Practices Act.

Paragraph 2.4 says that Corona is “suspected and accused of having accumulated ill-gotten wealth, acquiring assets of high values and keeping bank accounts with huge deposits.”

Drilon interjected that paragraph 2.4 simply “asserts that these properties could be ill-gotten” and that the impeachment court “did not rule on that and will rely on presumptions of law, particularly the Anti-Graft and Corrupt Practices Act.”

Cuevas, who noted Drilon’s bias, objected, but Drilon held his ground and said that this was what happened in the earlier caucus.

Enrile later said in a post-trial TV interview the ruling on Article 2 did not stop the prosecution from later on assessing that Corona may have illegally acquired properties.

“Ill-gotten wealth is a conclusion. So they have to present evidence and that’s why the factual matter that requires evidence is 2.2 and 2.3,” he said. The prosecution could later prove that Corona did not include several properties in his SALN, Enrile said.

After Enrile issued the ruling barring evidence on ill-gotten wealth charges, Cuevas spent the next hour convincing the court that Henares’ testimony would be “impertinent, irrelevant and immaterial.”

“We were made to understand that purpose of (Henares’)… testimony and the evidence she would produce is in connection with illegally acquired assets and no longer (the accusations in paragraphs) 2.2 and 2.3. But with the definite ruling of the court that there could be no reception of evidence with 2.4, that forecloses the avenue for her appearance in the witness stand,” said Cuevas, a former Supreme Court associate justice.

“Since it is clear that the issue of illegally acquired wealth would no longer be discussed, unless reversed by a different authority, the (prosecutors) are precluded from presenting,” he said.

But when lead prosecutor Niel Tupas Jr. asserted that Henares would be called to testify on “the truthfulness in the entries of (Corona’s) SALN and at the same time the capacity to pay of the Chief Justice and the wife,” murmurs filled the gallery.

Cuevas moved to declare Tupas’ plan out of order.

Senator Miriam Defensor-Santiago asked Tupas whether Henares would be presented as attesting officer to prove that the documents she would present were genuine papers from the BIR “and not the veracity (of its contents) … as expert witness.”

Santiago reminded Tupas that Henares cannot testify on the veracity of the contents of Corona’s ITRs “because she does not go (out) and see whether that is correct or not.  That is the function of some other office… Your purpose is simply to prove that that piece of paper was filed in her bureau.”

Senator Edgardo Angara warned that allowing Henares to testify on the veracity of ITRs would border on discussing paragraph 2.4 of the impeachment complaint.

“Any and all scintilla of evidence proscribed by the rulings of this court in connection with ill-gotten wealth, all evidence in connection (with this charge) is immaterial, irrelevant and impertinent and not admissible,” Cuevas barked.

“The essence and substance and sum total of (Henares’ testimony) is authentication,” Lim shot back.

“Please note that we never used the words ill-gotten wealth and the witness is  not testifying (about that). She is merely submitting public documents vis-a-vis the SALN.  These are already notarized documents,” the prosecutor explained.

Cuevas and Lim went on arguing about the necessity of Henares’ testimony for several more minutes until Recto intervened.

Prosecutors also zeroed in on a property in La Vista Subdivision, Quezon City, which Corona and his wife Cristina purchased nearly nine years ago for P11 million. Henares said that Cristina Corona had no income prior to the purchase made on Sept. 2, 2003.

Sensing blood, Lim walked toward the center of the hall and tried to go for the kill.

“Given this situation, Madam witness, what is the position of the BIR regarding this transaction?” he asked, only to be rebuffed by Enrile,  who said he was eliciting an “opinion.”

Enrile later ruled to disallow the question, after Henares admitted that the bureau was still investigating the La Vista purchase.

Henares also produced certificates authorizing registration (CARs) purporting to show properties of the Corona couple in Metro Manila: an October 2004 CAR covered a P3.5-million condominium unit in The Columns CA on Ayala Avenue in Makati City bought by Cristina; a November 2005 CAR of a P9.1-million property in Global City, Fort Bonifacio, Taguig City bought by Cristina; a December 2009 CAR of a P12.5-million unit in the Bellagio I, Ft. Bonifacio, owned by the Corona couple;  another December 2009 CAR of three properties worth P14.5 million; a December 2003 CAR of a P2.5-million unit in the Burgundy Plaza in Quezon City; an October 2010 CAR of an P18-million 1,200 sq-m land in Pansol, Diliman,  sold by Cristina to daughter Ma. Carla C. Castillo;  a March 2010 CAR of an P8-million 460-sq-m land in Pansol, Diliman, sold by the Corona couple to one Amelia Rivera; and a December 2011 CAR of the Corona couple’s P700,000 worth of club shares in The Palms Country Club Inc. in Filinvest, Alabang.