Europe clamps down as pandemic worsens 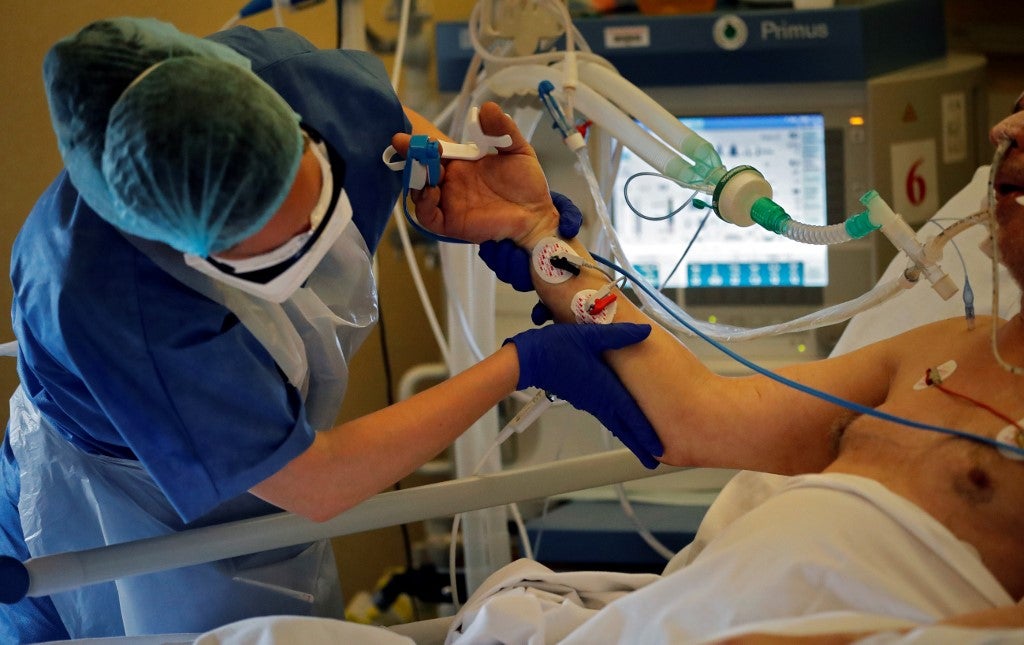 In this file photo taken on April 07, 2020 A nurse tends to an intubated and sedated patient infected with COVID-19 at the intensive care unit of the Peupliers private hospital in Paris. – More than 1,200 Covid-19 patients are now in intensive care in France, including 135 in the last 24 hours, according to figures from Public Health France published. There are now 1,232 people who have been placed in intensive care in total. A figure well below the levels reached during the peak of the epidemic, with 7,000 patients in sheaves in early April, but which is progressing rapidly. (Photo by THOMAS COEX / AFP)

MADRID, Spain — The coronavirus situation in Europe continued to deteriorate Thursday, with French authorities warning that Paris could be put on maximum alert and Spain extending drastic restrictions across its capital Madrid.

By 2000 GMT Thursday the pandemic had killed at least 1,019,267 people around the world and infected over 34 million, according to an AFP tally based on official sources.

French authorities said they may place Paris on maximum virus alert as soon as Monday, potentially requiring all bars to close as the number of cases surges.

“We’re in a phase where the situation is worsening,” Health Minister Olivier Veran said.

Spain, fighting a second wave of the virus, also extended drastic restrictions across its capital, despite fierce opposition from Madrid’s regional authorities, and most other regions have agreed to tighten curbs in areas of rapid contagion.

In Britain, chief scientific adviser Patrick Vallance told reporters “things are definitely heading in the wrong direction” as the government extended lockdowns to several towns in northern England, effectively putting more than a quarter of the country under tighter coronavirus restrictions.

And the Slovak and Czech governments both decided to impose states of emergency, starting Thursday and next Monday respectively, to allow them to take quick decisions in the face of considerable upticks in infections and deaths.

In the sporting world, Italian football suffered a blow with the postponement of Genoa’s weekend match against Torino because team and staff members at the Ligurian club tested positive for the coronavirus.

Nevertheless, European football’s governing body, UEFA, said that it will allow spectators back into matches in the Champions League and its other club and international competitions “at a maximum of 30 percent” capacity.

In Switzerland, stadium crowds also returned for the first time since the pandemic began, but Health Minister Alain Berset said the Alpine country was entering a “delicate phase” of its battle against the virus.

“It’s the start of autumn, it is a bit colder outside and the coronavirus continues to complicate our lives,” he said on Twitter.

On the other side of the globe in China, where the outbreak began late last year, the Golden Week holiday marking the 1949 founding of the People’s Republic took on added significance this year.

“People are travelling with a vengeance!” said Huo Binxing, a banker from Beijing who was heading to Lhasa in Tibet. “It’s our first chance to unwind after such a stressful period.”

Also spreading their wings were travellers to South Africa, where a first batch of regional and international flights landed Thursday after a more than six-month shutdown.

While it reopened its borders to all African countries, South Africa is barring tourists from around 50 nations with high infection rates, including Britain, France, India, Russia and the US.

The skies were far less bright in the United States, where American and United airlines announced they would begin furloughing 19,000 and 13,000 workers respectively as US officials have failed to reach a deal on fresh aid.

Also in the US, a study from Cornell University said President Donald Trump has been the world’s biggest driver of misinformation during the pandemic.

Evaluating 38 million articles published by English-language, traditional media worldwide between January 1 and May 26 of this year, a team identified 522,472 news articles that reproduced or amplified misinformation related to the pandemic.

The most popular topic was “miracle cures” that appeared in 295,351 articles. The authors found comments by Trump drove major spikes in that theme.

In India, meanwhile, new research suggested that a small group of super-spreaders was responsible for almost two-thirds of coronavirus cases in the world’s second-most populous nation.

The study, published in the journal Science, found that eight percent of all people carrying the virus were responsible for 60 percent of new infections.