Metro Manila buses started collecting fares via stored value cards on Thursday and the Department of Transportation (DOTr) ordered the concessionaire behind the so-called Beep cards not to charge commuters for the smart cards to be used in the system that used to be limited to trains in the metropolis.

“We are still under quarantine measures. Workers who have just returned to work are the main users of the rail system and the Edsa busway,” said Transportation Secretary Arthur Tugade. “They should be spared from the burden of having to pay the price of the Beep card on top of their fares.”

Many passengers were surprised by the change in the fare payment system with some complaining about the P30 to P50 cost of the card that had to be loaded with cash in order to be used.

DOTr officials ordered AF Payments Inc., the consortium composed of the Ayala Group and First Pacific Group, to scrap the payment for the cards and give commuters the option to load the card with no minimum requirement, or just the amount they need for the fare.

The DOTr ordered the use of fare cards on public utility buses that ply the Edsa Busway route starting Oct. 1 to facilitate the transition to cashless fare payments and as part of measures to contain the spread of the new coronavirus.

Assistant Transportation Secretary Goddes Libiran, the DOTr spokesperson, clarified that bus operators, who are now part of the Mega Manila consortium for the Edsa busway, were the ones who chose the Beep card for their automatic fare collection system (AFCS).

“When the LTFRB (Land Transportation Franchising and Regulatory Board) issued the directive, it is stated in the guidelines that PUVs (public utility vehicles) must implement cashless transactions. But there is no specified AFCS,” said Libiran, adding that operators may have chosen Beep because of its “interconnectivity” with the rail systems.

Commuters can use the Beep card for rides in the LRT 1, LRT 2 and MRT 3 train lines, some point-to-point buses, and modern PUVs. 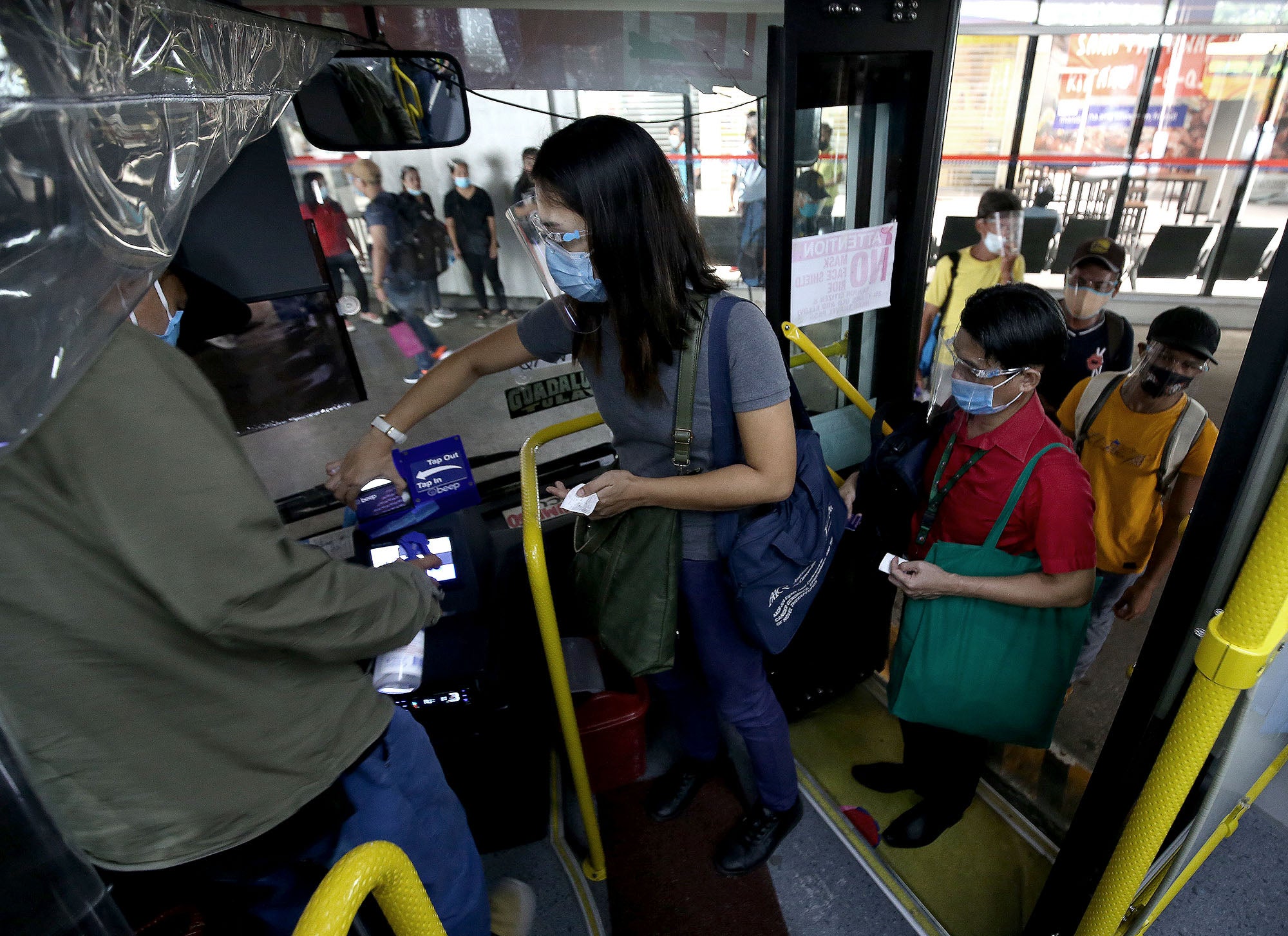 IN FORCE Passengers use stored value cards to pay their fare at the Parañaque Integrated Terminal Exchange on Oct. 1. —RICHARD A. REYES

Beep cards can be purchased with a one-time card fee of P30 in train stations and P50 in other areas, and are reloadable and valid for four years.

For the Edsa busway, the DOTr said passengers can purchase the cards at train stations, Metro Manila branches of FamilyMart, and the bus terminals of HM Transport in Alabang Town Center and Market! Market!; BGC Bus in Edsa, Market! Market! and Bonifacio One Technology Tower; and RRCG in Alabang Town Center, Greenbelt 1, Greenbelt 5, Starmall Alabang and Starmall Shaw.

On the first day of the cashless payment scheme along Edsa, however, some commuters took to social media to complain about overpriced cards being sold at bus stops and the long queues at Beep card loading stations.

At a bus stop in Muñoz, Quezon City, Beep cards are being sold at P80 each without load.

Others said the stored value cards are being sold in some areas by scalpers for P170, preloaded with P70, which means they have to buy the card for P100.

For buses along Edsa, Beep cards require a P70 maintaining balance, or the minimum card balance based on the maximum possible fare of the route.