MANILA, Philippines — The Alabang Country Club in Muntinlupa was ordered closed by the Muntinlupa City government after it organized a golf tournament last month in violation of the government’s community quarantine guidelines.

In a letter dated Sept. 28, Monday, Muntinlupa Mayor Jaime Fresnedi notified the country club of the closure order after an investigation found that the country club violated health protocols amid the enforcement of the general community quarantine (GCQ).

“Proceeding from the investigation conducted by the Philippine National Police, Muntinlupa City Unit, on the alleged conduct of golf tournament in Alabang Country Club on Aug. 29, 2020, Secretary Eduardo M. Año of the Department of the Interior and Local Government gave a directive to cause the suspension of the operations of the golf course as shown by the attached letter to the undersigned dated Sept. 25, 2020,” read the letter.

“Given the above and finding probable cause that there was indeed violation of safety and health protocols warranting the suspension of the business permit issued in your favor, the City Government of Muntinlupa hereby orders you to immediately stop the operations of the golf course upon receipt of this letter, together with the cease and desist order issued by the Business Permits and Licensing Office subject to the conclusion of the investigation being conducted on the matter,” it added.

When asked about the duration of the closure, Muntinlupa Public Information Office told INQUIRER.net that it was waiting for further investigation from the PNP.

In a previous report, the National Task Force against COVID-19 launched a probe of the Alabang Country Club and Club 515 for putting together a tournament from Aug. 28 to Aug. 29 with Metro Manila under GCQ.

Last week, the Sherwood Hills Golf Club in Trece Martires City, Cavite was also shut down by the local government for reportedly holding a golf tournament despite the government’s restrictions on sports events during the quarantine. 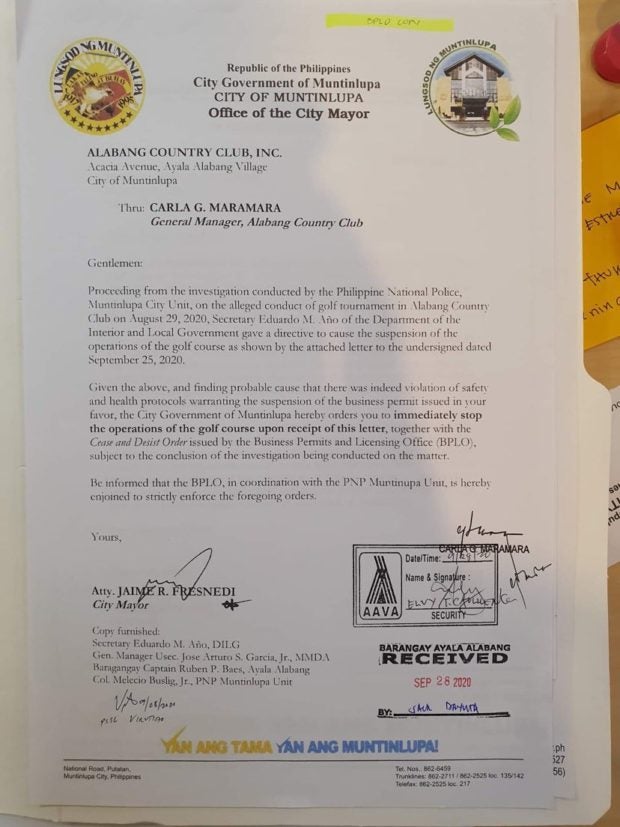