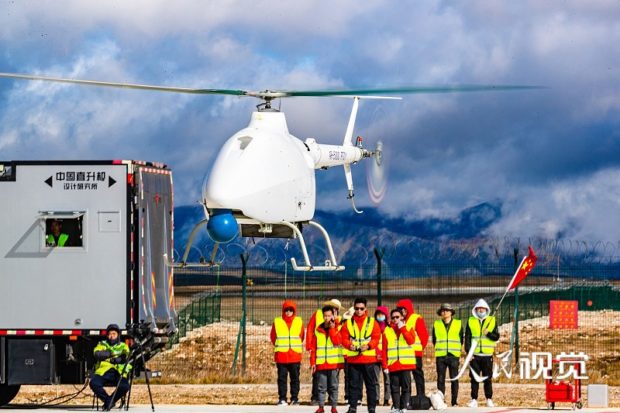 AVIC, the country’s leading aircraft conglomerate, said in a statement on Monday that the 15-minute test flight at Daocheng Yading Airport in Sichuan province set a high-altitude record for a domestic unmanned helicopter’s takeoff and landing.

Zeng Guogui, the aircraft’s chief designer, said the test proved its reliability in plateau operation. He said the model can fly at least five hours with a payload of 80 kilograms, which means that each flight can transport enough food for 30 people to consume in one day.

Daocheng Yading Airport, located in the Garze Tibetan autonomous prefecture, is characterized by its tough climate and complex landforms, which posed a real challenge to the test, he said.

The AR500C, designed and built by the AVIC Helicopter Research and Development Institute in Jingdezhen, Jiangxi province, conducted its debut flight on May 20 at the institute’s unmanned aircraft testing base in Jiangxi’s Poyang county. It stayed aloft for about 20 minutes.

The unmanned helicopter has a maximum takeoff weight of 500 kilograms, a maximum altitude of 7,000 meters and a maximum speed of 170 kilometers per hour. It can perform autonomous takeoffs and landings.

The institute said the model was designed based on its predecessor, the AR500B, and in accordance with plateau environments.

It can carry additional equipment to engage in various tasks such as electronic jamming, aerial searches, firefighting, maritime surveillance and looking for nuclear or chemical leaks. It can also cooperate with manned aircraft or independently operate in supply transportation and locking in on and striking targets, Zeng said.

Zeng’s team started research and development on the AR500C last year, with designers focusing on its engine, rotor wing, aerodynamic modifications and composite materials. The first one was assembled in March and underwent ground tests before its maiden test flight in May.

AVIC has developed several types of unmanned helicopters, but they were not specifically designed for plateau deployment.

Compared with conventional unmanned helicopters, those made for plateau operations need stronger engines, better temperature adaptability and other specific modifications, according to aviation experts.