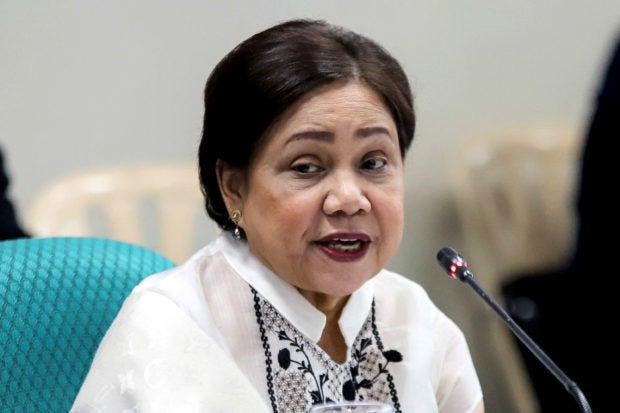 MANILA, Philippines — Senator Cynthia Villar wants the Environmental Management Bureau (EMB) to be excluded from government agencies covered in the proposed measure that seeks to expedite the issuance of licenses and permits during times of national emergencies.

Villar, chair of the Senate committee on environment and natural resources, noted on Tuesday that the EMB is in charge of issuing Environment Compliance Certificates (ECCs), which she believes needs proper studies and consultations from experts.

EMB is a bureau under the Department of Environment and Natural Resources.

She cited for instance the creation of a 287-hectare artificial island along the coast of Manila Bay in the territorial jurisdiction of Parañaque City, which she said will cause flooding in Parañaque, Cavite and Las Piñas, and will be detrimental to the viability of the Las Piñas-Parañaque Wetland Park.

“The President has always said that there will be no reclamation of Manila Bay under his watch. He has said it many times. I just want to ask why this EMB—that’s why I want to remove that EMB—is issuing ECC in the reclamation of Manila Bay continuously, so it is not following the President,” Villar said during a Senate hearing on the Senate Bill No. 1844 which seeks to authorize the President to expedite the processing and issuance of national and local permits, licenses and certifications.

“That’s why I am questioning the inclusion of EMB in this ease of doing business,” she added.

The bill covers all agencies of the executive department, including departments, bureaus, offices, commissions, boards, councils, government instrumentalities as well as government-owned and controlled corporations.

The senator pointed out that the EMB will only continue to issue ECC without study and consultation with experts if the bureau is included in the bill and once the proposed measure becomes a law.

According to Villar, the disruption of the natural flow of water due to the reclamation project being pushed by the Parañaque local government unit will destroy a 35-hectare mangrove forest which serves as the spawning ground of fish in Manila Bay that supports the livelihood of 300,000 fisherfolks.

“Not all ease of doing business is good for everybody. Kasi ‘yung iba (Because others), it will require a lot of consultation and studies because it will destroy the lives of so many people,” she noted.

In response, Senate Majority Leader Juan Miguel Zubiri, one of the senators who filed the bill, told government agencies included in the proposed measure that the easing of doing business does not mean they should always approve all applications. He explained it only means they should grant the permit or not within a particular time.

If the project being applied for is harmful to the environment, then permits should not be granted, said Zubiri.

However, Villar said the matter on issuance of permits will still have to be delegated as the president most likely won’t know all issues surrounding the proposed projects.

“So who will be delegated, who can understand the issues of the local people?” she asked.

“’I guess we have to make exception to this because there are issues that will affect the lives of so many people and that should not be included in the ease of doing business. It should be studied very well so that these things can be prevented,” she added.