Corrupt officials should be the ones to resign, not Duterte -- Sotto | Inquirer News
Close
menu
search

Corrupt officials should be the ones to resign, not Duterte — Sotto 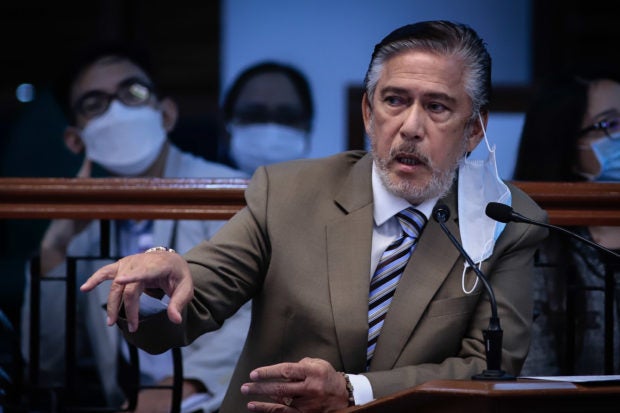 MANILA, Philippines — Instead of President Rodrigo Duterte, it should be corrupt officials who should resign, Senator President Vicente Sotto III said Tuesday.

(Corrupt officials should be the ones to resign not Duterte.)

In a taped address aired Monday night, Duterte said he offered to step down from his post due to corruption in the government.

“He was elected by the country, he cannot turn his back on the specified task by the Filipinos!” the Senate president said.

The President, in the same address, said he is willing to appear before Congress to discuss how they could fight corruption.

Last September 16, Duterte also met with Congress leaders, including Sotto, to discuss bills that would cut red tape and corruption in the government.

Read Next
Zamora: NCR may shift to MGCQ if there is stable decline in COVID cases
EDITORS' PICK
This new condo in the South will make you want to turn a new leaf
Jonel Nuezca, convicted ex-cop, collapses and dies at Bilibid
Legarda: Ending Violence Against Women, a cause for all
Smart offers wireless fiber-like speeds to Filipino homes with country’s first 5G Prepaid Home WiFi
EJ Obiena’s coach rebuffs Patafa ‘witch hunt,’ says he never complained about pay
Google won’t accept election ads for 2022 national polls
MOST READ
Jonel Nuezca, convicted ex-cop, collapses and dies at Bilibid
Bongbong Marcos to face another disqualification case
BioNTech CEO says vaccine likely to protect against severe COVID from Omicron
Carlos vows to let PNP personnel spend time with family during holidays, work near their home
Don't miss out on the latest news and information.