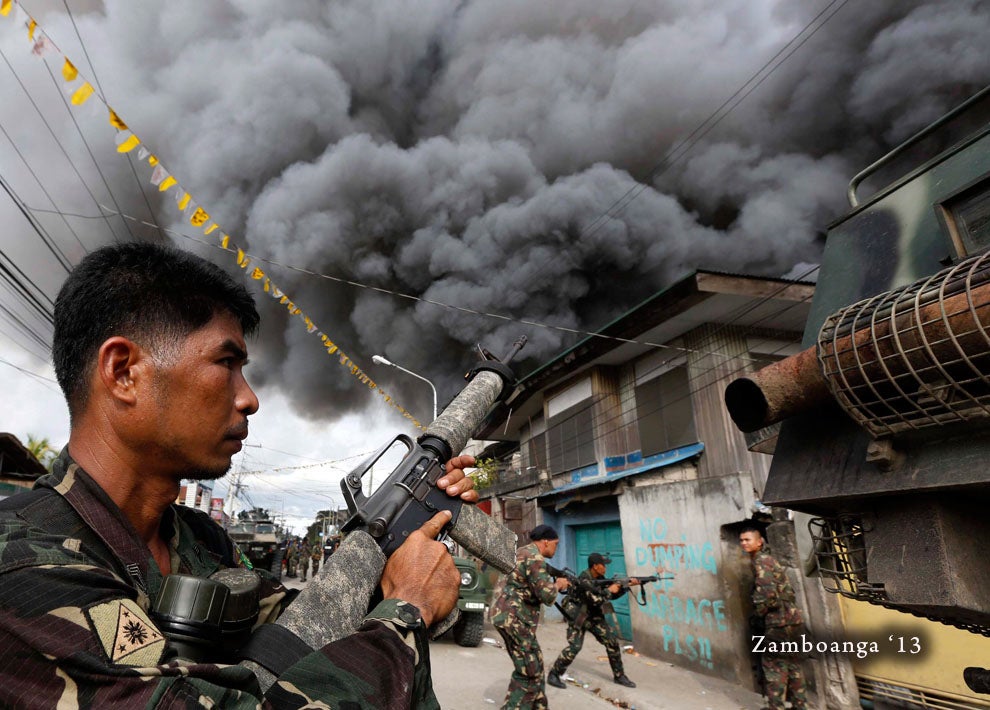 ‘ONE OF THE UGLIEST ARMED CONFLICTS IN THE PHILIPPINES.’ The Philippine Army looks back at the 19-day Zamboanga City siege, which ended seven years ago today, Sept. 28. OACPA

MANILA, Philippines—The Philippine Army on Monday (Sept. 28) paid tribute to soldiers who gave up their lives to thwart an operation by a faction of the Moro National Liberation Front (MNLF) to take over Zamboanga City in 2013.

“Years have passed since the bloodshed but the Philippine Army still honors and will forever remember the fortitude of our fallen heroes in Zamboanga,” the Army said in a tribute.

“Without their courage and sacrifice, the success of the operation would have been unattainable,” it said.

The siege of ZamboangaCity by MNLF men and the military operation to prevent the terrorists from establishing a Moro state in Zamboanga lasted 19 days and left more than 300 dead and hundreds of thousands of residents homeless. The Army described it as one of the “ugliest armed conflicts in the Philippines.”

It started on Sept. 9, 2013, when at least 200 members of the MNLF landed in Zamboanga City and started taking hostages, triggering a gun battle with government forces. Twenty-five government forces, 12 civilians, and more than 200 MNLF fighters had been killed. It ended on Sept. 28, seven years ago today.

Thousands of houses were destroyed and more than 100,000 people had been displaced.

“Our soldiers fought hard during the crisis and some of them paid the ultimate sacrifice. But we cannot deny that in this battle, the hardest hit were the civilians,” the Army said.

The Army cited 1Lt Francis Damian, who was shot dead during close-quarter battle on Sept. 23, 2013.

The Army tribute said Damian was supposed to be on a 10-day academic break after he graduated from Basic Airborne Course. “Instead he volunteered to be deployed in Zamboanga to fight alongside his men,” the Army said.