Velasco: Uphold term-sharing agreement ‘for God and our country’ 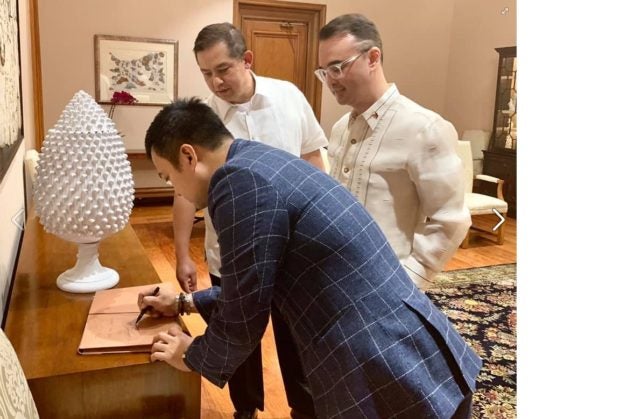 MANILA, Philippines — Marinduque Rep. Lord Allan Velasco has once again called on his colleagues to uphold the term-sharing agreement between him and Speaker Alan Peter Cayetano, saying it was made “for God and our country.”

In a Facebook post on Monday, Velasco pointed out that the agreement between him and Cayetano was based on mutual trust and confidence, especially as it was brokered by and forged in the presence of President Rodrigo Duterte.

Under the agreement, Cayetano would serve as House Speaker in the first 15 months of the 18th Congress while Velasco would succeed to serve for the remaining 21 months under a term-sharing agreement. If this is to be followed, Cayetano’s term would end in October this year.

“The covenant was crystal clear: a 15-21 term-sharing agreement. The first term expires on Sept 30, after which the second term immediately begins,” Velasco said.

“That was the pledge made before the President. As true leaders and as examples for our people, both sides are obligated to avoid situations or statements that would subvert the agreement and betray the trust of our people who’ve stood witness to the covenant,” he added.

Trust and honor are values that are important, especially in these trying times. They reveal our true character and show…

Velasco said that as he has always intended to honor the deal, Cayetano’s camp should do the same “for God and our country.”

“Let us uphold the agreement as this was made ‘FOR GOD AND OUR COUNTRY 1521’. I have always intended to honor the agreement. We all should. Our people deserve nothing less,” the Marinduque lawmaker said.

In the same Facebook post, Velasco underscored the importance of trust and honor as they “reveal our true character and show what we, as leaders, are truly made of.”

“And it is in this period of difficulty that our people yearn for honorable leaders whom they can trust–– Leaders who are able to live up to their promises come hell or high water, Leaders with Palabra de honor who lead not with lip service, but who back up their words with action,” Velasco said.

Despite the term-sharing agreement, a number of House members from both the majority and minority bloc have expressed support towards the continued leadership of Cayetano.