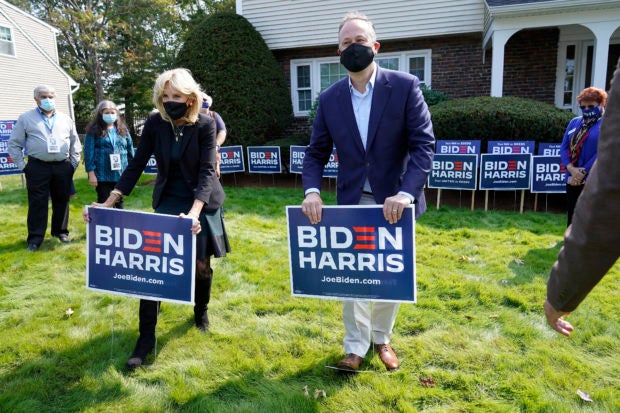 CEDAR RAPIDS, Iowa  — Jill Biden and Doug Emhoff are both from New Jersey. They married politicians who have been in the national spotlight for years. And now they’re building a team as the better halves of the Joe Biden campaign.

Biden and Emhoff have rapidly become two of the campaign’s most prolific surrogates, engaging in in-person campaign events and virtual fundraisers at a pace that often outmatches their spouses at the top of the ticket.

While Joe Biden and Kamala Harris have spent their days campaigning in key states like Wisconsin, Pennsylvania and Florida, Jill Biden and Emhoff have had nonstop schedules of virtual fundraisers, constituency-focused events and trips to important but less high-profile states like Virginia and Maine, where Jill Biden visited this week.

They’ve campaigned together more than their spouses have, visiting New Hampshire earlier this month and Iowa over the weekend. And in a joint interview this weekend, they said they’ve begun to build a partnership that will help the campaign and a potential Biden administration.

“Don’t you think the American people love seeing people in government who respect one another and are friends with one another?” Jill Biden said as she campaigned in Cedar Rapids, Iowa, on Saturday.

“Especially in this time of the pandemic, and it’s such a divisive government that we’re living in now, this chaos of Donald Trump’s America, I think people are looking for people who are strong to come together to lead this country forward. And I think the four of us are going to show that.”

Emhoff and Biden spent the day touring damage from the recent derecho that hit Iowa, helping a group of volunteers clean up a park hit by the storm and speaking at a drive-in rally later that afternoon.

Emhoff said every interaction they have with voters they take back home to their spouses, to help them better understand the challenges confronting Americans.

“Whether it’s vets or health care or all these issues that are important to people right now, we’re out here listening, and we’re literally going right back to Joe and Kamala with these notes from the field. So it’s just the more we can do things together and experience this together, the stronger they’re going to be,” he said.

It wasn’t their first time campaigning together — the two hit the trail earlier this month in New Hampshire, where they held events focused on health care and veterans.

The participants included Billy Shaheen, husband of Democratic Sen. Jeanne Shaheen. He said he had a three-hour dinner with Emhoff and Harris back in January and came away impressed with them both.

“Doug is going to be great. He’ll be a great second gentleman. He’s a good balance for her. He really supports her,” he said in an interview.

Their busy schedules reflect in part the traditional strategic role of the spouses on a presidential campaign — essentially doubling the campaign’s footprint, amplifying its core message and expanding it to broader constituencies.

Jill Biden has become one of the campaign’s main surrogates for Latino outreach and, as a teacher herself, often holds events focused on teachers and education. Emhoff, with his network of deep-pocketed donors as an entertainment lawyer, has done fundraising for the campaign and headlined a number of Jewish outreach events.

But the pace also reflects what’s perhaps a more urgent imperative for a political spouse in the age of Trump, when Biden himself has made an explicit argument that “character is on the ballot” this fall.

Connie Schultz, who’s campaigned for her husband, Democratic Ohio Sen. Sherrod Brown, and wrote a book about what it’s like to be a political spouse, said Biden’s and Harris’ spouses are their best messenger on that front.

“They help humanize these people at a time when I think the public is looking at character a little bit more than they otherwise would have,” she said.

Indeed, at the drive-in rally in Cedar Rapids this weekend, Brian Johannesen, a 32-year-old musician, said he felt it was “important to get to know the better halves of the candidates.”

“It’s good to see the other side of the team — it gives you more confidence in who they are as people,” he said.

While their joint appearances may be helpful for the campaign, they’re also laying the groundwork for what could be a fruitful working relationship in the White House. Jill Biden had a close working and personal relationship with Michelle Obama, and the two frequently appeared at public events together and worked on veterans’ issues throughout their eight years in the White House.

Emhoff and Biden declined to share details on how they foresee their relationship affecting their roles in the White House. But they’ve been “bonding,” Emhoff said, since the primary, when he would chat with Jill Biden backstage before events, and Joe would put his arm around him and ask, “How are you doing, kid?”

When Harris was chosen as Biden’s running mate, the Bidens called Emhoff’s parents and then his kids. Jill Biden said it was clear they “really had a strong sense of family,” and from that moment, “Joe and I just knew right then that this was going to work.”

“This was going to be a really strong team because we value the same things,” she said.

Emhoff said he’s learning from Biden every time they campaign together. While he’s joined Harris on the campaign trail throughout her career, and campaigned for her during the Democratic primary, he took a leave of absence from his job, and the pace and number of events he’s doing as part of the presidential ticket is new. Jill Biden has made sure to call and check in on him after a busy week.

“I lived what he’s going through. It’s like, all of a sudden, your life changes so incredibly. It’s such a journey, and every day is different,” she said. “I’ve gone through that — and I want to make sure Doug’s OK. Because it’s hard. It’s hard being thrown into the spotlight.”