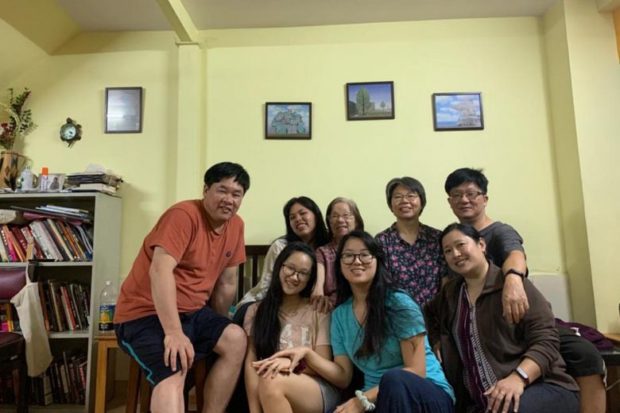 The Liang family members from three cities quarantined together in Bangalore to beat Covid-19. JOAN LIANG via The Straits Times/Asia News Network

BANGALORE — When Aman Gwjwn, 17, developed a persistent cough and cold in July while on holiday at her grandmother’s home in Bangalore, her family of eight went to war, preparing themselves for Covid-19 to sweep through their home.

Everyone from a 14-year-old eighth-grade student to a near-octogenarian would go on to be infected. But the Chinese-Indian family slowly won their battle against the disease over the next 1½ months, armed with discipline, composure and logistical planning.

“Our approach was: We’ll all surely get it, but we’ll all survive it as a family. We just made sure everyone didn’t fall sick together, so that some people were healthy enough to take care of the others,” said Ms Jennifer Liang, 48, Aman’s mother and a social worker in Assam who flew to Bangalore immediately.

The Liangs formed what they called “a war council” of decision makers, which included Jennifer’s husband Sunil Kaul, a doctor and public health activist in Assam. As Aman isolated herself in her uncle’s house nearby, the family set up a WhatsApp group called Covid Planning.

They identified rooms they could use for isolation in their two homes in the neighborhood. They gathered a quiver of thermometers, oximeters to check oxygen saturation levels, hot water flasks, gargle solutions and sanitizers.

It was agreed that the oldest member of the family, 78-year-old Mrs Li Ying Liang, was the most vulnerable to the coronavirus, and would need hospitalization.

“In July, Bangalore had horror stories of people going from hospital to hospital in search of beds. So we called some doctors beforehand and checked on bed availability,” said Mrs Gloria Liang, 41, who runs a food products business with her husband Peter, Li Ying’s oldest child.

Thirteen days after Aman showed symptoms, Gloria developed a sore throat and fever, and isolated herself in another room. Gloria’s eighth-grade daughter was next to fall ill with a fever, followed by her older college-age daughter.

When both girls lost their sense of smell, they isolated themselves straightaway, not waiting for Covid-19 tests.

“Test results take time and some were inconclusive. To be on the safe side, we assumed everyone with even mild symptoms has Covid, and followed our protocol,” said their father, Peter, 50.

As more family members fell sick, they used spreadsheets to track when each person went into quarantine and came out of it.

A caterer delivered meals, while the family focused on steam inhalations, exercise and building immunity. Every day, they would note down their temperatures and record their varying symptoms.

Sunil, coordinating from Assam, advised against antibiotics, so the family used Tibetan traditional medicines for pains and fevers.

They joked about how Peter would chase them with a bottle of rose essence to test their sense of smell.

“We hated sniffing that sweet smell but if we couldn’t smell it, it meant we had Covid,” said Joan, 20, the undergraduate, who continued attending her online classes to stay active.

With hugs banned, the family kept their spirits up with board games and movies – all wearing masks. They even used the communal lockdown to learn mahjong.

Sometimes, plans unravelled. To his surprise, Peter, who was in good health, felt breathless late one night and had to be rushed to a hospital. Soon after, his mother, Li Ying, experienced chest pains, and was also admitted.

“I prayed for my family to recover fast, but I felt I would rather die than feel this pain,” said Li Ying, who felt overwhelmingly lonely in her hospital room.

Having spent much of her adulthood in India, the grandmother of three understands Hindi and English, but in the hospital, unwell and scared, she could recall only Cantonese. With her children not allowed in the Covid-19 wards, and no medical staff conversant in Cantonese, Li Ying was miserable.

“When she stopped eating, our doctor friend finally connected us over the phone. My mother sobbed and said she was starving but was unable to swallow,” said Jennifer.

The doctors immediately put the 78-year-old in intensive care, intubated her and started tube feeding.

Jennifer and her younger brother Lawrence, 45, who came from Delhi, both fell ill, though the latter tested negative.

By mid-August, all eight had recovered. “A friend sent us briyani. With our taste back, we really enjoyed it,” said Joan.

As they emerged from their illness, the Liangs found many friends asking for advice. In a snappy 15-panel presentation, they offered practical advice on how to rotate caregiving responsibilities, strategically quarantine, build immunity with exercise and diet, and keep morale high.

Families with many generations living together are common in India, and the Liangs’ document became widely shared on social media. Jennifer heard that complete strangers were using it to prepare their own responses.

“The disease is unpredictable, so planning ahead is key. The main thing is, don’t panic,” she said.