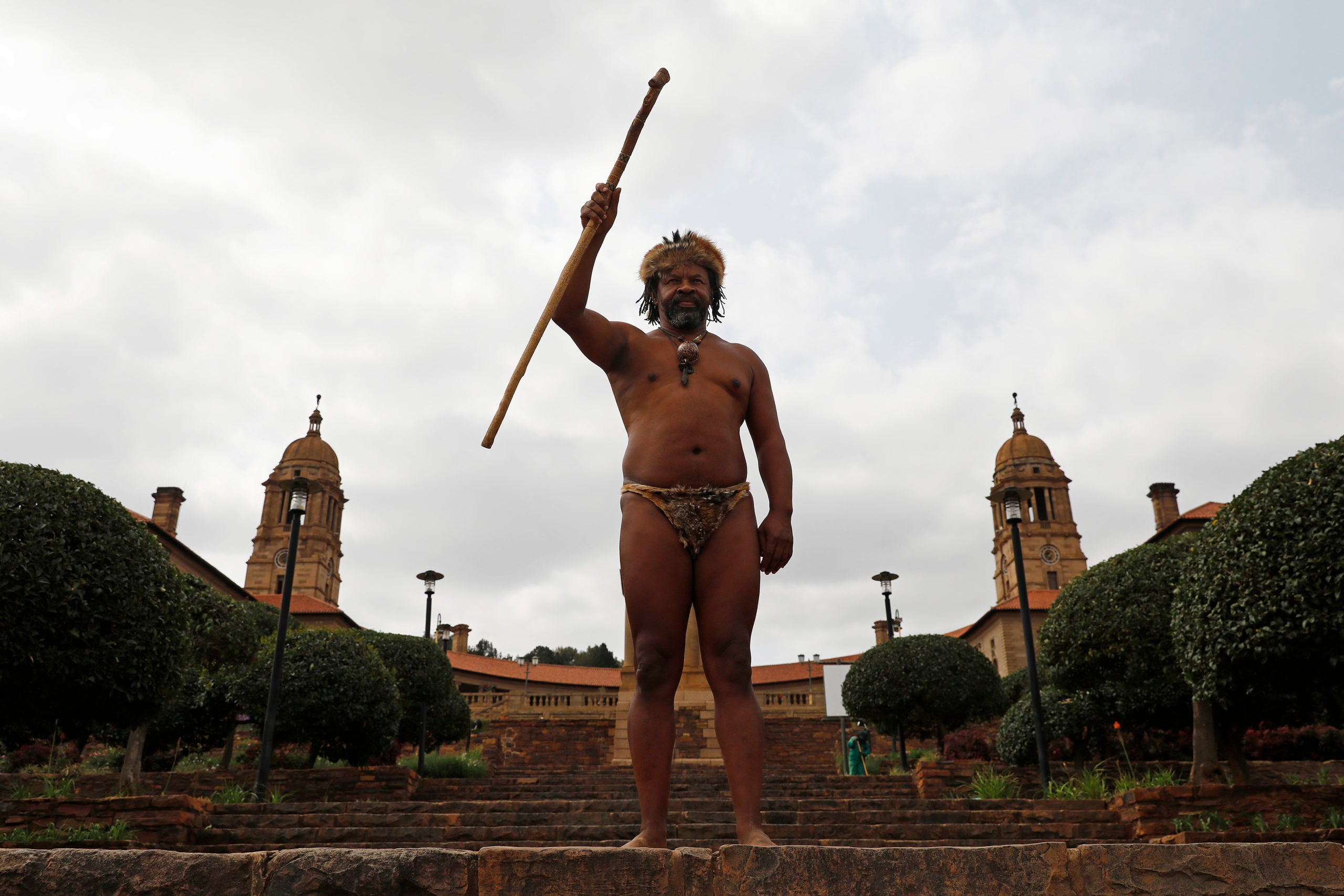 King Khoisan South Africa poses for a photograph at the Union Buildings in Pretoria, on September 22, 2020. – A few meters from the giant bronze statue of Nelson Mandela, a big black polyethylene tarpaulin tent has become a fixture on the green lawns of the South African president’s offices in Pretoria. It houses a group of activists from the Khoisan indigenous people — South Africa’s first inhabitants. For two years they have been camping outside the seat of government, fighting for the official recognition of their languages, and to negotiate land ownership. (Photo by Phill Magakoe / AFP)

PRETORIA, South Africa — A giant bronze statue of Nelson Mandela overlooks a big black tarpaulin tent that has become a fixture on the emerald lawns of the South African president’s office in Pretoria.

The tent houses campaigners from the Khoisan indigenous people — South Africa’s first inhabitants, whose presence in this country has been dated by archaeologists to thousands of years.

For the past two years, the activists have been camping outside the seat of government, demanding the official recognition of their languages and to negotiate land ownership.

They also want the word “colored” — the mixed-race tag they have been carrying since apartheid and which is still largely used in official documents — to be abolished.

“We will wait here until we have what we came for,” said one of their leaders, who calls himself King Khoisan South Africa.

Union Buildings is an imposing 110-year-old structure that has housed colonial, apartheid and democratic leaders including Mandela and now President Cyril Ramaphosa.

One has inscriptions in Afrikaans saying Ramaphosa doesn’t give a damn — “We have been here for more than one year and what does he do? Nothing!”

Ramaphosa last year signed into law the Traditional and Khoi-San Leadership Act, which grants more autonomy to the Khoisan community.

But some of the Khoisan remain unsatisfied and see the law as the starting point for a constitutional and cultural struggle.

But how many Khoisan there are, in a population of 59 million, is unclear — and their identity is also a subject of debate.

“We talk about Khoi herders and San hunter-gatherers, but archaeologically it’s hard to tell them apart,” explained Tammy Reynard, curator of the Origins Centre at the University of the Witwatersrand.

As South Africa marks its heritage month in September while trying to recover from a coronavirus pandemic lockdown, communities such as the Khoisan have been reflecting and questioning their fractured identity.

The Khoisan have been referred to in the past as “Bushmen” — and when the Dutch settlers landed in South Africa in the 17th century, they called them Hottentots, a word derived from the famous clicks in their languages.

In one of the grimmest episodes of colonial times, a Khoisan named Sarah Baartman was taken to Europe in the early 19th century by a British doctor and paraded as an anatomical freak — the “Hottentot Venus,” who people could see and touch for a fee.

Abused and sick, she died in poverty, and her remains were displayed in a Paris museum. They were returned to South Africa in 2002 and buried with honor in the Eastern Cape. Her tale is described in “Black Venus,” a 2010 French film directed by Abdellatif Kechiche.

“Classified coloreds want to know who they are — they are coming together like it never happened before,” said Anthony Philip Williams, founder of Indigenous First Nation Advocacy SA.

The virus “lockdown put a magnifying glass on the inequality that we have inherited,” said Denver Toroga, a Khoisan-language activist and poet.

“But I think it also helped us go beyond the need to acquire wealth and seek a different type of cultural wealth.”

One of the Khoisan languages, which is written as “N|uu,” is listed by UNESCO as facing extinction, with just three fluent speakers still remaining.

In a speech marking the country’s heritage day on Thursday, Ramaphosa said the nation “is steadfastly protecting” that and other indigenous languages.

For many campaigners, land is the key.

The much-publicized issue of handing back farmland taken during white supremacy must include restitution for the Khoisan as well as for black communities, said King Khoisan.

“You cannot talk about identity outside of land,” said Williams.

“We must engage government for what is called a negotiated settlement,” he said.

“A part of that settlement must be the land that we access, that we can live on, where we can produce and use it for cultural purposes, for access to the resources. The resources of this land belong to our forefathers.”