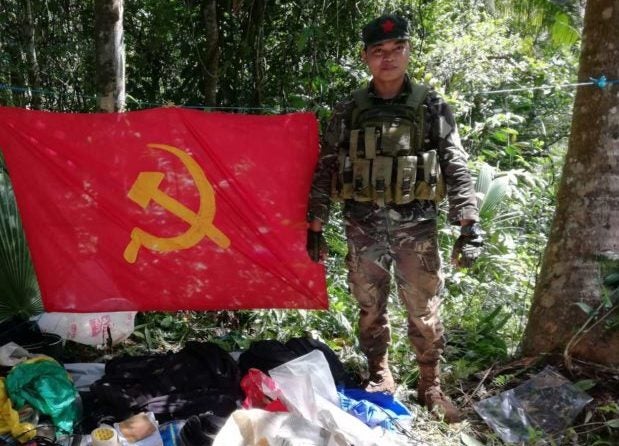 A soldier stands over personal belongings seized from NPA rebels after a clash in Luisiana town in Laguna on Thursday, Feb. 14, 2019. (Photo from the Philippine Army )

This, after the two lawmakers, slammed the AFP over its links to accounts and pages taken down by Facebook because of “coordinate inauthentic behavior.”

(We are not hiding our support for organizations like these where parents only want that their children be rescued from being victimized by the terrorist group NPA.)

Arevalo was referring to Hands Off Our Children, an advocacy group of parents who were looking for their children supposedly recruited by the NPA. Its page was among the accounts shut down by Facebook.

(This is our request from our lawmakers Carlos Zarate and France Castro. If you are against the atrocities of this terrorist group, raping, killing, or exploiting women, we even see contraceptive pills from places where the NPA are, let’s condemn them.)

Both Zarate and Castro flagged the link of the military and police to fake Facebook accounts that were shut down, saying public funds could have been used to finance its operations.

Zarate also urged Facebook to publicize the list of pages and accounts it shut as he called on Congress to investigate the issue.

(We join our good congressman Zarate in his call for Facebook to disclose these accounts that have links to the Philippine military because we, ourselves, dislike and will not allow the use of fake news.)

Facebook earlier said it shut down over 100 fake accounts linked to the military and police for “coordinated inauthentic behavior” which could refer to the use of multiple accounts to “mislead people” or the users had fictitious names of individuals and groups.

Apart from pages supposedly operated by the military and police, Facebook also shut pages based in China that were in support of President Rodrigo Duterte and the possible presidential bid of his daughter, Davao City Mayor Sara Duterte.

Both the military and the police have disowned the said fake Facebook accounts.