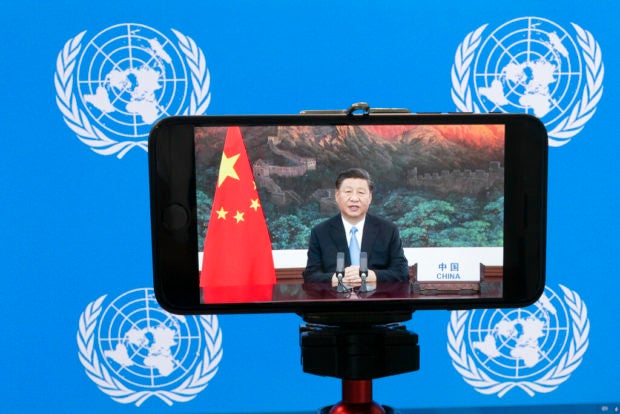 Chinese President Xi Jinping is seen on a video screen remotely addressing the 75th session of the United Nations General Assembly, Tuesday, Sept. 22, 2020, at U.N. headquarters. This year’s annual gathering of world leaders at U.N. headquarters will be almost entirely “virtual.” Leaders have been asked to pre-record their speeches, which will be shown in the General Assembly chamber, where each of the 193 U.N. member nations are allowed to have one diplomat present. (AP Photo/Mary Altaffer)

UNITED STATES, United States — China on Thursday lashed out at the United States at a high-level UN meeting over its criticism on the coronavirus, with its envoy declaring, “Enough is enough!”

Two days after President Donald Trump used his annual address to the General Assembly to attack China’s record, the US ambassador to the United Nations also took an outraged tone — after which her Chinese counterpart showed palpable anger.

“I must say, enough is enough! You have created enough troubles for the world already,” Chinese envoy Zhang Jun told a Security Council meeting on global governance attended through videoconference by several heads of state.

“If someone should be held accountable, it should be a few US politicians themselves.”

Using a phrase often told by US leaders to China, Zhang said, “The US should understand that a major power should behave like a major power.”

The United States “is completely isolated,” he said in remarks enthusiastically backed by his Russian counterpart.

– ‘Shame on each of you’ –
His remarks came after the US ambassador, Kelly Craft, opened with angry words that took diplomats off-guard.

“You know, shame on each of you. I am astonished and I am disgusted by the content of today’s discussion,” Craft said.

“I am actually really quite ashamed of this Council — members of the Council who took this opportunity to focus on political grudges rather than the critical issue at hand. My goodness.”

Diplomats said they were puzzled at the tone of Craft, who had left by the time the Chinese ambassador spoke.

Craft was “very aggressive” after a session that had been “more or less full of consensus,” one diplomat said on condition of anonymity.

With world leaders asked to send speeches in advance for a virtual General Assembly, Chinese President Xi Jinping could not reply Tuesday to Trump and delivered a mild-mannered speech in which he unveiled more ambitious targets on climate change.

But the spokesman for the General Assembly, Brenden Varma, said China had requested to speak next Tuesday, the day set up for any nation to reply to statements.

Trump in his speech had demanded action against China for spreading the “plague” of Covid-19 to the world.

China suppressed news of the respiratory disease when it first emerged last year in Wuhan and initial advice played down the risks of transmission.

China’s communist leaders have more recently tried to transform the narrative into one of the country’s success in stopping the virus.

Trump’s response to the pandemic — which he has provocatively called the “China virus” — has emerged as a major political issue as he seeks a new term in the November 3 election.

“Our nations are asking for financial support that rises to the level of the economic crisis they’re witnessing,” said Niger’s President Mahamadou Issoufou.

“Just a debt moratorium will not be enough faced with the challenges that have arisen. We simply have to cancel the debt completely,” he said, reiterating a call made Tuesday by his counterpart from the Democratic Republic of Congo, Felix Tshisekedi.

The Group of 20 major economies in mid-April suspended debt payments for the poorest nations through the end of the year as they face major budget shortfalls due to the Covid shutdown.

The African Union is seeking to extend the moratorium through 2021, warning of dire economic effects from the health crisis.

“This pandemic could erase more than a decade of economic growth and social progress achieved by the African continent,” Ivory Coast President Alassane Ouattara said.

Despite the economic concerns, Africa has been one of the regions least affected in health terms by Covid-19, with the continent reporting 1.8 million cases and 34,500 deaths.