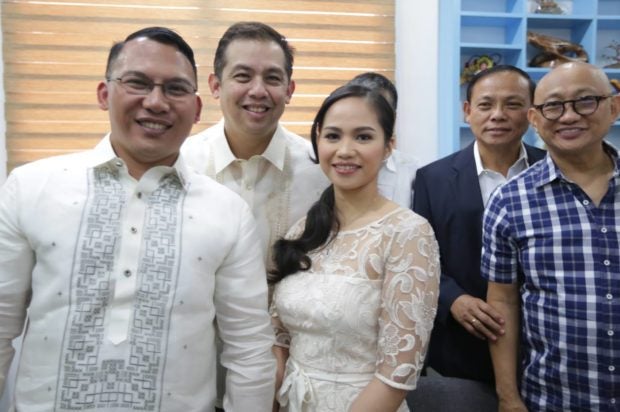 The wife of former National Youth Commission chair Ronald Cardema, Ducielle (center) is to be proclaimed as the Representative of Duterte Youth party-list, Photo from the Facebook page of Rep. Martin Romualdez

MANILA, Philippines — The Commission on Elections is eyeing to proclaim the wife of Ronald Cardema as the representative of the Duterte Youth party-list within the week.

Comelec chairman Sheriff Abas on Thursday said the poll body’s en banc has already granted the issuance of a certificate of the proclamation to Ducielle Cardema two weeks ago.

“Last two weeks ago, we already granted ‘yung pag-issue ng certificate of a proclamation to the party-list Duterte Youth with the name of Ducielle Cardema as the representative, finally,” he said during the House deliberations on Comelec’s 2021 budget.

“May apat na [commissioners] na nakapirma diyan so hopefully makaka-release kami ng certificate of proclamation within the week,” he added.

(Four commissioners have so far signed so hopefully, we can release the certificate of proclamation within the week.)

Without a COP, the first nominee of a winning party-list group cannot take his or her oath as an official member of the House.

In the 2019 elections, Duterte Youth won one seat in Congress but it has yet to have a representative in the House since there were several resolutions challenging the validity of its nominees and party registration.

The Comelec 1st Division has canceled the nomination of former National Youth Commission chair Ronald Cardema as Duterte Youth’s 1st nominee as the 34-year-old was deemed ineligible to be a youth representative.

However, Comelec en banc accepted Cardema’s bid to withdraw his nomination, clearing the way for Duterte Youth’s substitute nominees to assume a seat in the House.

Abas said the Comelec is not to be blamed for the delay in the proclamation of Duterte Youth since there have been cases filed against the party-list.

(The problem is there was a substitution of nominees, there were cases, Ronald Cardema was disqualified.) [ac]