Trudeau says Canada is in a second COVID-19 wave 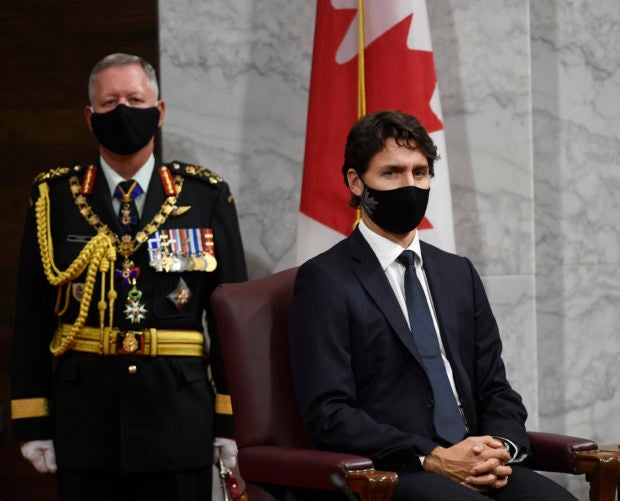 TORONTO — Prime Minister Justin Trudeau said Wednesday that Canada is in a second wave of COVID-19 and warned the country is on the brink of a fall season that could be much worse than the spring.

Trudeau noted that when Canada went into lockdown March 13 there were 47 new confirmed cases of COVID-19, and that Tuesday alone, Canada had well over 1,000. Many provinces slowly reopened over the summer.

“We can’t change today’s numbers or even tomorrow’s – those were already decided by what we did, or didn’t do, two weeks ago,” Trudeau said in a rare nationally televised address.

“But what we can change is where we are in October, and into the winter. It’s all too likely we won’t be gathering for Thanksgiving, but we still have a shot at Christmas.”

Trudeau urged Canadians to keep wearing masks and to download the government’s COVID-app that lets a person know if they’ve come in close contact with someone who has tested positive.

“Together, we have the power to get this second wave under control,” he said.

Trudeau said his government will do “whatever it takes” to support Canadians and the economy during the pandemic as his Liberal government presented the government’s priorities for a new session of Parliament in a speech earlier Wednesday.

If the three main opposition parties vote against the speech, which was formally delivered by Governor General Julie Payette, an election would be triggered. But at least one is expected to support the speech.

Two leaders of opposition parties could not attend the speech because they recently tested positive for COVID-19. Canada has seen a surge in cases in recent days.

The governor general called the pandemic the most serious public health crisis Canada has ever faced. Over 9,000 Canadians have died in six months and the government says the economic impact of COVID-19 on Canadians has already been worse than the 2008 financial crisis.

The government is extending the Canada Emergency Wage Subsidy to next summer. In the early days of the pandemic Trudeau announced businesses would be eligible for a 75% wage subsidy for their employees for businesses that have seen a 30% decrease in revenue. The government says now is not the time for austerity.

“Low interest rates mean we can afford it,” Trudeau said. “Doing less would end up costing far more. Doing less would mean a slower recovery and bigger deficits in the long run.”

Trudeau won reelection last year, but his Liberal party does not have the majority of seats in Parliament and must rely on at least one opposition party to stay in power.

Erin O’Toole, elected the Conservative leader last month, taped a response to Trudeau’s national address as he isolated at home after a COVID-19 diagnosis. O’Toole and his wife tested positive last week.

“So my first big speech as Conservative leader was at 1:30 in the morning. And now my second is from my front porch recovering while I’m recovering from COVID. This was not the first month I had planned,” O’Toole said.

Bloc Quebecois leader Yves-François Blanchet, who is also isolating after testing positive for COVID-19, said in a live address that he would not vote for the Throne Speech if the government doesn’t give more money to Quebec for health care.

It might be left to the leftist New Democratic Party to prop up the government after Conservative Opposition Deputy leader Candice Bergen earlier said her party won’t support the Throne Speech..

New Democrat leader Jagmeet Singh said his party is going to take a long time to consider the throne speech.

“I don’t want an election because I don’t think that will help people,” Singh said.