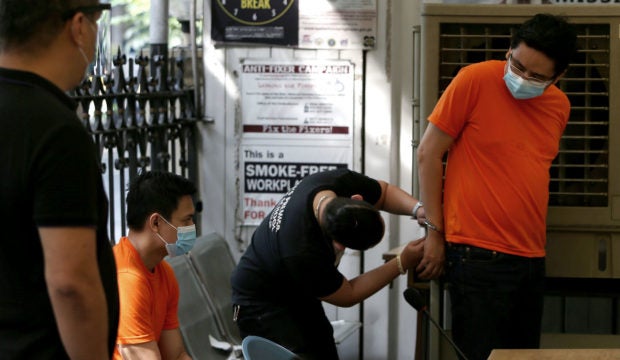 CAUGHT RED-HANDED An agent of the National Bureau of Investigation puts a handcuff on Joshua Paul Capiral, the chief of the NBI’s Legal Assistance Bureau, who was allegedly caught red-handed on Monday night taking bribe money from one of the 19 immigration agents charged with graft for alleged involvement in the “pastillas” airport escort service. His brother, Christopher, an immigration officer who was also arrested, watches from his seat during inquest proceedings at the Department of Justice on Wednesday. —RICHARD A. REYES

MANILA, Philippines — The National Bureau of Investigation is looking into other cases handled by a senior lawyer of the agency who was arrested for allegedly taking bribes to exclude certain immigration officers from being prosecuted in the “pastillas” airport escort racket, an official said on Wednesday.

Emerito Dongallo Jr., chief of the NBI Special Action Unit (SAU) said NBI Director Eric Distor had ordered an audit of all the cases that passed through Joshua Paul Capiral, Legal Assistance Bureau chief, who was arrested in his office on Monday night, along with his brother, Christopher, an immigration officer.

“We are tracing all the cases,” Dongallo told the Inquirer. “We just discovered that he was the mole a week ago so we are backtracking. We are doing a follow-up.”

He said SAU agents entrapped the Capiral brothers after Immigration Officer II Jeffrey Dale Ignacio, one of the 19 officers earlier charged in the pastillas scheme, had disclosed that the NBI lawyer sold cases for at least P100,000.

NBI Deputy Director Ferdinand Lavin said Ignacio, now the complainant in the case against the Capirals, had been “telling it all” about how Christopher had claimed that his brother, who had been the legal assistance bureau chief for the past six years, could “do something” to the cases against them.

Sen. Risa Hontiveros, who is leading a Senate inquiry into the escort racket, had estimated that up to P10 billion in bribe money greased the hands of corrupt immigration officers and private tour operators involved in the scheme since the early part of the Duterte administration.

The racket was exposed to the Senate early this year by a whistleblower, Immigration Officer Allison “Alex” Chiong. Under the scheme, a Chinese national who arrives as a tourist but who intends to work for Philippine offshore gaming operators (Pogos) pays a P10,000 “service fee” for a smooth entry into the country.

The scheme acquired such a label because the bribe money was rolled up in white paper that looked like the Filipino milk candy.

Senate Minority Leader Franklin Drilon, a former justice secretary, on Wednesday said the NBI should file a disbarment case against Capiral, whose alleged extortion was “one of the reasons Filipinos are losing faith in the ability of the government to fight corruption.”

“This only shows how rampant corruption is today,” he said in a television interview. “The NBI should make an example out of Capiral that corruption has no place in the agency.”

“If we do not address this, everybody will believe that they can bribe the NBI and having that perception is not good in the fight against corruption,” Drilon said.

Justice Secretary Menardo Guevarra said Capiral’s arrest “is a stern warning to all that corrupt and other criminal activities will not be tolerated, especially in agencies which are supposed to be the pillars in the administration of criminal justice.”

The Department of Justice said it would immediately resolve the NBI’s charges of robbery, extortion, graft, unethical conduct and disclosure of classified information against the Capirals.

Senior Deputy State Prosecutor Richard Anthony Fadullon said the NBI complaint had been submitted for resolution since the brothers did not ask for preliminary investigation.

The Capirals, both held at the NBI detention cell, are set to undergo inquest proceedings.

“We are of the assumption that [Capiral] is asking [for] money, but nobody admits to this, but what is sure is he is asking for money, that’s P100,000 per head” Dongallo said.

Lavin said Ignacio told them that several of the 19 who were charged with graft in the Office of the Ombudsman early this month were asked to pay P100,000 to, at the least, weaken the cases against them. In Ignacio’s case, the amount was doubled because of another case filed against him, Lavin said.

He said Capiral told the immigration officers allegedly charged in the pastillas racket that he could “exclude” them from the case.

Capiral’s brother, Lavin said, served as the NBI lawyer’s “go-between,” being an immigration officer himself.

“Our complainant here is already telling all,” he said.

Although Capiral had only recommended four officers to be charged, Dongallo said a review by other officials led to the filing of charges against the 19 immigration personnel.

“Remember we are looking at more than 30 [people involved],” Lavin said, adding that more could be charged.

Dongallo encouraged the other whistleblowers to come out, promising they would be provided security. —

— With reports from Marlon Ramos and Dona Z. Pazzibugan