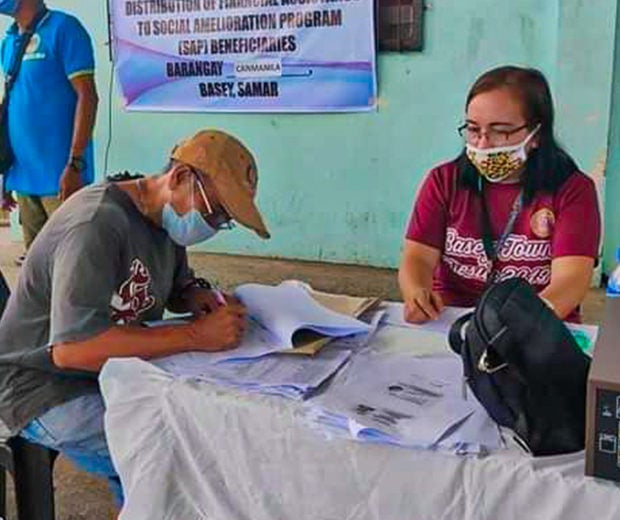 This file photo shows the distribution of the government’s cash aid in Eastern Visayas. (DSWD-8)

MANILA, Philippines — It is unreasonable for the Department of Social Welfare and Development (DSWD) not to disburse its P10 billion allocation to subsidize low-income Filipinos upset by the COVID-19 pandemic.

Senators Risa Hontiveros and Panfilo Lacson echoed the surprise and dismay of other lawmakers over the DSWD’s P10 billion “savings” while many remain crying for government assistance as threats of the coronavirus persist.

“While they may not have violated their own rules when they subsequently restricted the application of the rule to areas under ECQ [enhanced community quarantine] or MECQ [modified ECQ], it is UNCONSCIONABLE na may pera ka, iniipit mo, at hindi mo ibibigay sa mga nangangailangan,” Senator Risa Hontiveros said in a statement on Wednesday.

To recall, Metro Manila and four of its nearby provinces were reverted in August to modified enhanced community quarantine – a stricter lockdown protocol that limited business operations and people’s movement anew.

As for Senator Panfilo Lacson,  DSWD’s P10 billion “savings” was lamentable because the amount could have fed more families who are having a hard time making ends meet in this time of pandemic.

“I would have manifested that hundreds of thousands of mouths are still waiting to be fed just to survive, and that the agency should at least mind those poor souls,” said Lacson in a statement, expressing regret that he was presiding over another hearing when the DSWD’s proposed budget was being deliberated on.

Lacson also disclosed that he earlier sent a letter to DSWD Secretary Rolando Bautista on behalf of a family – whom he did not know – who has not received cash aid from the government. He said he did not get any reaction from the DSWD chief.

“I have not even received a ‘yes’ or ‘no’ response even from a clerk of DSWD. If this is not failure of planning, preparation, coordination, and implementation, I do not know how to describe it,” he said.

During the Senate hearing on DSWD’s proposed 2021 budget on Tuesday, Bautista explained the agency was not able to spend the P10 billion under the social amelioration program (SAP) because the number of cash aid beneficiaries was trimmed from 18 million to 14 million.

The government’s COVID-19 task force limited the coverage of SAP’s second tranche to residents of areas that were under enhanced community quarantine or ECQ until May 31, 2020.

Finance Secretary Sonny Dominguez III himself admitted earlier Wednesday that he was surprised over DSWD’s P10 billion unspent funds under SAP. He promised to take up the matter with the country’s economic managers.