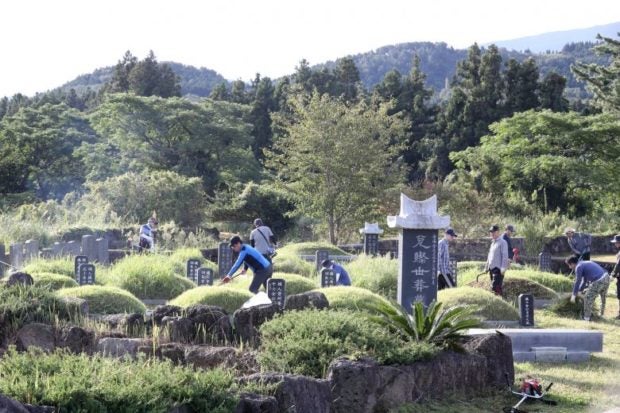 Visitors clearing the grass around their ancestors’ graves on Jeju island, South Korea, last Sunday. On Monday, the government announced that all 11 national cemeteries will be closed from Sept 30 to Oct 4. EPA-EFE via The Straits Times/Asia News Network

SEOUL — For the first time in nine years, housewife Yvonne Park will be relaxing over chuseok, or the Korean Thanksgiving Day, instead of toiling over the sink “washing a mountain of dishes the size of Mount Everest”.

Washing dishes and preparing food is the responsibility of first daughters-in-law like her, when the extended family gathers every autumn to pray to ancestors and catch up over a feast of traditional fare such as jeon (Korean pancakes) and songpyeon (crescent-shaped rice cake).

The annual festival in South Korea, which falls on Oct 1 this year, is known to be immensely stressful for married women who have to slog for hours in the kitchen, while young people dread nosy relatives trying to pry into their personal lives.

But this year, with the Covid-19 pandemic and social distancing rules still in place, Mrs Park, 31, said her husband has decided against visiting his family with their three children, aged three to nine.

Doing so would have meant a three-to five-hour drive on congested roads from their home in Pyeongtaek city, 65km south of Seoul, to the in-laws’ house 90km away in Nonsan city, with a rest stop along the highway that will probably be crowded with other travelers.

“We won’t know who has the virus so it’s best to avoid the risk,” she told The Straits Times.

“We will just stay at home this chuseok as most shops are closed. But thanks to the coronavirus, I’m very happy that I finally don’t have to wash a mountain of dishes anymore.”

But millions of people – out of a population of 51 million – are still expected to be on the move next week, even though the government has urged people to stay at home and will not waive highway tolls like in previous years in a bid to discourage traveling.

Some have opted for a domestic vacation instead, with southern Jeju island slated to receive at least 200,000 visitors over the Sept 30-Oct 2 holiday which stretches into the weekend, which means a five-day break.

Gangwon, the eastern province, is also expected to be brimming with local tourists.

The Transport Ministry has estimated that the number of chuseok travelers will decline by 30 per cent this year, with some 6.18 million people to be on the move on Oct 1 alone. Over 90 per cent are expected to drive, so roads will be congested.

Health officials have warned of another wave of coronavirus infections after chuseok, noting that asymptomatic cases still linger in the country.

South Korea reported 61 new cases yesterday, the lowest since Aug 14 when the daily number spiked above 100 due to a new wave of clusters. The country’s total tally stood at 23,106 cases, including 388 deaths.

A two-week special virus prevention scheme will kick in from Sunday, in a bid to curb the potential spread of Covid-19 over the festive period.

Details will be revealed later this week, but the scheme is expected to include beefed-up anti-virus measures at popular tourist spots.

On Monday, the government announced that all 11 national cemeteries across the country will be closed from Sept 30 to Oct 4.

Online worship services will be provided instead for people wishing to pay respects to their ancestors.

Some provincial governments have embarked on campaigns urging residents to tell their children to stay away and not go visiting this chuseok.

For some families though, gathering over chuseok is still a must.

Music teacher Oh Ju-hee, 36, who lives in Seoul, said she will be visiting her parents and in-laws, who both live near her, next week.

The main gathering at her in-laws’ house will involve 16 people from four families, she told The Straits Times.