MANILA, Philippines—President Rodrigo Duterte made noise during his speech in the United Nations General Assembly when he raised several issues that seem to be out of the left-field for him.

Senator Ralph Recto, however, said the credit is not Duterte’s but on the speechwriters that penned the address that was presented to other world leaders.

“If there’s an Emmy for the UN General Assembly speeches, the one he delivered can win the prize for the best written,” said Recto, the Senate President Pro Tempore, in a statement Wednesday.

“The team who put policies to prose should be congratulated. What they put together is the template for presidential addresses: cohesive, coherent, and straight to the point.”

Duterte, whose speeches presented in local television are sometimes a litany of curses or incoherence, spoke with regality befitting of his position during the UN General Assembly and he even raised the Hague ruling proclaiming the Philippines’ legal victory over China regarding the West Philippine Sea.

“The President’s unequivocal stance against China’s illegal reclamation in our seas should to put rest any ambivalence on where he and our government stand on this important issue,” said Recto. “From where he spoke, with the whole world watching, he was able to plant our flag on a territory that historically and legally is ours.” 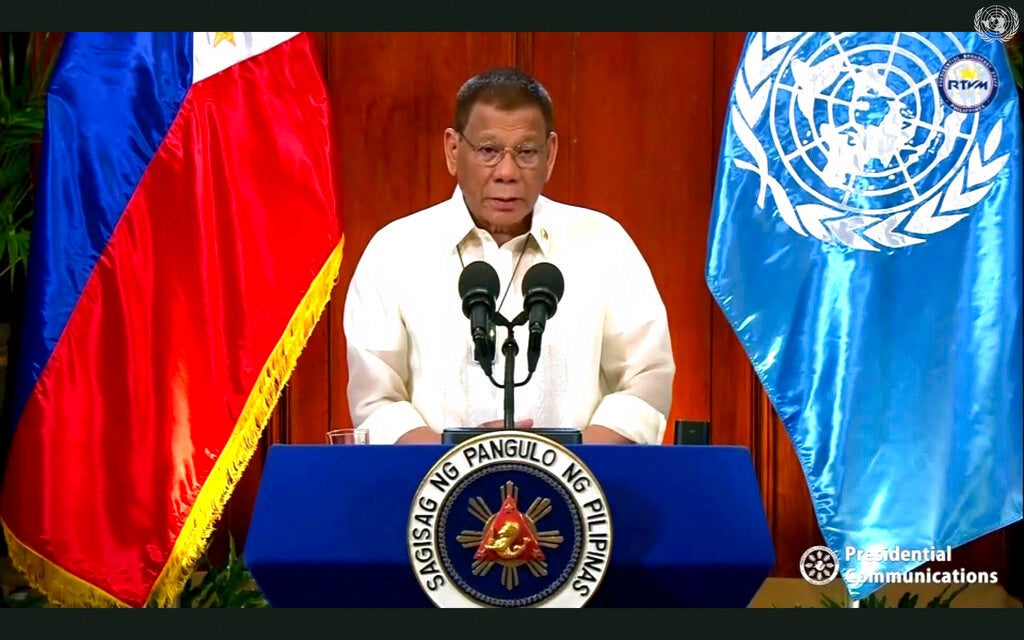 In this image made from UNTV video, Rodrigo Roa Duterte, president of the Philippines, speaks in a pre-recorded message which was played during the 75th session of the United Nations General Assembly, Tuesday, Sept. 22, 2020, at UN headquarters. The U.N.’s first virtual meeting of world leaders started Tuesday with pre-recorded speeches from some of the planet’s biggest powers, kept at home by the coronavirus pandemic that will likely be a dominant theme at their video gathering this year. (UNTV via AP)

Duterte also reiterated the Philippines’ position in its acceptance of Rohingya Muslims and other refugees, a stance the Philippines held throughout history most notably during World War II when then-President Manuel Quezon opened the country’s borders to displaced European Jews.

The President, though, managed to still defend the much-maligned Anti-Terrorism Act that has received numerous countermeasures in the Supreme Court.

Recto said Duterte’s dignified presence shouldn’t be reserved to just international assemblies and that he should always be the personification of his high office to the Filipino people during the coronavirus disease (COVID-19) pandemic.

“If he was able to convey his thoughts with clarity to the world, all the more he should do the same to his own people at this time when they need hope and direction,” said Recto.