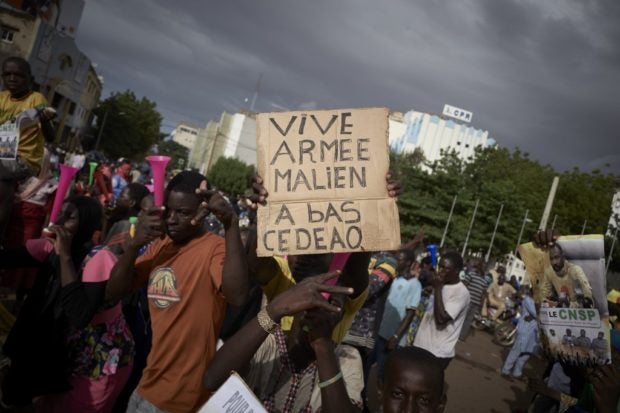 A man holds a sign reading “Long live Malian army, down with ECOWAS” as supporters of the CNSP (National Committee for the Salvation of the People) take part in a rally on Independence square in Bamako, on September 8, 2020, following a call by the MP4 (Popular Movement of 4th September) for a gathering to support the role of the army in Mali’s transition phase after a military junta overthrew the president.  The West African regional bloc ECOWAS on September 7 called on Mali’s military junta, which seized power last month, to appoint a civilian to head a transition government by September 15. Photo by MICHELE CATTANI / AFP

Addressing reporters during a ceremony marking 60 years of Malian independence, Goita said the recent nomination of a civilian as interim president meant that West African leaders must end their trade embargo.

The 15-nation West Africa bloc ECOWAS has yet to comment but France, which has troops stationed in Mali, welcomed the appointment of former defense minister Bah Ndaw and other interim leaders as “an encouraging step.”

The French foreign ministry said this “must lead to the election of legitimate authorities.”

“The international community is watching us… which is why we accepted the ECOWAS principles,” Goita said on Tuesday.

“In the coming days ECOWAS must remove these sanctions for the happiness of the Malian people,” he added.

The demand comes after a group of officials selected by the junta chose retired colonel Bah Ndaw as interim president on Monday.

The 70-year-old will lead a transition government for a maximum of 18 months before staging national elections, according to a plan endorsed by the junta.

But it remains unclear how West African leaders will react to Ndaw’s nomination.

Hauled back from retirement, the former defense minister spent his career in Mali’s military, where he occupied a series of senior positions.

Goita himself will remain as vice president of the transition government.

Mali’s neighbors are anxious to avoid the fragile nation of some 19 million people slipping into chaos.

Swathes of the vast country already lie outside of government control, due to a lethal jihadist insurgency that first emerged in 2012 and has also inflamed ethnic tensions.

Last week, ECOWAS took a hard line and threatened a “total embargo” on the country should the junta install military leaders of an interim government.

Heavy sanctions could bite in the poor country already facing a severe economic downturn, aggravated by the jihadist insurgency and chronic inter-ethnic violence.

It was frustrations over this intractable conflict — plus economic concerns and perceived corruption — which pushed anti-Keita protesters onto the streets this year, provoking tensions which culminated in last month’s coup.

Goita on Tuesday urged citizens to form a “sacred union around Mali” and support the security forces.

“Today is an opportunity for me to congratulate and encourage them for all their efforts to bring security and peace to Mali,” he said of the troops.

The junta leader also called on Malians to support the “partner forces” of France and the United Nations present in the country, which are often a target of popular anger.

France has 5,100 soldiers deployed across the Sahel as part of its anti-jihadist Operation Barkhane. There are also 13,000 UN peacekeepers in Mali.

French President Emmanuel Macron told the UN General Assembly on Tuesday that “the second these states wish us to leave or consider that they can fight terrorism alone, we will withdraw.”