Chinese tycoon and Xi critic jailed for 18 years for corruption 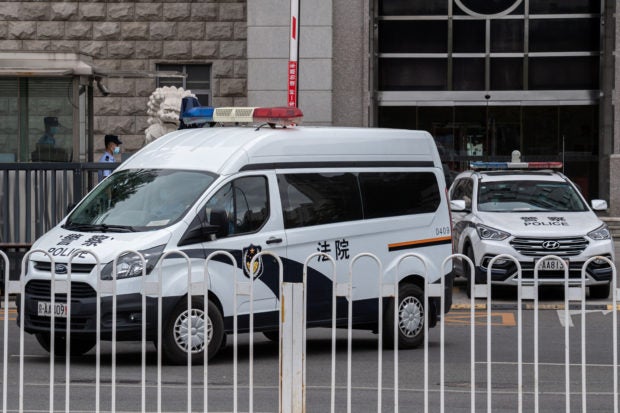 An escorted police van (L) carrying Chinese property tycoon Ren Zhiqiang leaves the Beijing No. 2 Intermediate People’s Court on September 11, 2020, after Ren’s case was heard. – Ren was detained after penning an essay fiercely critical of President Xi Jinping’s response to the coronavirus outbreak and was placed under investigation for “serious violations of discipline and law,” according to an anti-graft watchdog in April. (Photo by NICOLAS ASFOURI / AFP)

BEIJING — A Chinese tycoon who called President Xi Jinping a clown and criticized his handling of the coronavirus outbreak was jailed for 18 years on Tuesday for corruption, bribery, and embezzlement of public funds.

Ren Zhiqiang – once among the ruling Communist Party’s inner circle – disappeared from the public eye in March, shortly after penning an essay that lambasted Xi’s pandemic response.

Tuesday’s verdict said Ren embezzled almost 50 million yuan ($7.4 million) of public funds and accepted bribes worth 1.25 million yuan, according to a statement from the Beijing No. 2 Intermediate People’s Court.

It said the 69-year-old “voluntarily and truthfully confessed all his crimes,” and would not appeal the court’s decision.

Beijing has stepped up its crackdown on civil society since Xi took power in 2012, tightening restrictions on freedom of speech and detaining hundreds of activists and lawyers.

Tuesday’s verdict claimed that Ren also “abused his power” in his role at Huayuan Group, which caused more than 116 million yuan of losses to the state-owned holding company and more than 53 million yuan worth of property losses for the group.

The Communist Party’s disciplinary watchdog launched an investigation into Ren in April, and the trial opened at a Beijing court on September 11 with a handful of supporters outside and a heavy police presence.

One supporter told AFP they backed Ren because he “dares to speak the truth.”

Ren’s essay, from earlier this year, has been scrubbed from China’s internet – which regularly censors content that challenges the authorities – but was shared online outside China.

“Standing there was not an emperor showing off his new clothes, but a clown stripped of clothes who insisted on being an emperor,” he wrote.

Ren’s influential blog on the Twitter-like Weibo platform attracted millions of followers before his account was closed by authorities in 2016 after he repeatedly called for greater freedom of the press.

Online reaction to Ren’s sentencing was also being rapidly scrubbed on Tuesday.

“The only real-estate tycoon who dares to tell the truth in China has been censored,” read one comment on Weibo.

The son of a former vice commerce minister and a Communist Party member for decades before he was expelled in July, Ren was well connected with party elites.

He wrote in his memoir that he had been friends with vice-president and former anti-corruption chief Wang Qishan since they were teenagers when Wang was assigned by their school to mentor the younger Ren.

He is also a controversial figure, particularly over his defense of China’s soaring house prices – once telling Chinese media that people who had been unwilling to invest in real estate before the boom “now deserve to be poor.”