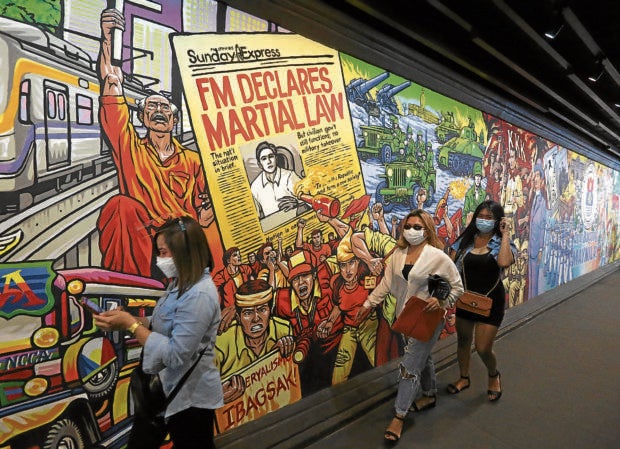 HISTORY WALK-THROUGH A mural depicting the Sept. 23, 1972, declaration of martial law and other historic events greets pedestrians at the newly spruced up Lagusnilad underpass in Manila. This week the country marks the 48th anniversary of the proclamation of military rule that enabled President Ferdinand Marcos to stay in power as dictator. —MARIANNE BERMUDEZ

As Filipinos commemorated the 48th anniversary of the late dictator Ferdinand Marcos’ declaration of martial law, academics on Monday grappled with an interesting question: How does one distinguish between historical “revisionism” and “denialism” about the events of that dark era? Experts noted that the two terms were being used interchangeably even though they meant different things.

They spoke in separate webinars: the “Dambana ng Gunita” commemoration hosted by the University of the Philippines (UP) System, and the “Disinformation in History” by the Asian Center for Journalism (ACFJ) of Ateneo de Manila University.

By itself, revising history is “considered important and necessary, and must be done continually,” medical anthropologist Gideon Lasco said in a webinar hosted by ACFJ chair John Nery.

Both Nery and Lasco are Inquirer columnists.

“Historical revisionism is not necessarily a bad thing because many things need to be revised in the way that history is presented,” Lasco said. “But there is also an argument that revisionism can be a ‘euphemism’ for outright lies.”

One such “outright lie,” he said, was that the Marcos period was a “golden age for the Philippines” despite evidence to the contrary.

From 1977 to 1982, the country’s external debt grew from $8.2 billion to $26 billion, exacerbated by crony capitalism and the Marcos family’s exorbitant lifestyles.

Such revisions in history are rooted in historical record and evidence, and are therefore “legitimate,” she said.

“But when we talk about denying that there were thousands killed during martial law, or that billions were stolen from the national coffers, that’s denialism, that’s distortion,” she said.

Both Lasco and Bawagan urged the public to be “more explicit, aggressive” in these distinctions to help the public sift through the conflicting narratives about martial law.

“What has changed today is that denialism has become much more brazen and technology has gotten more powerful to amplify its most pernicious effects,” Lasco said, adding that contemporary rebuttals “will speak louder than future rejections.”

“So that rant is directed at their construct of Marcos. Shouldn’t they be studying (French philosophers Jacques) Derrida and (Jean-François) Lyotard more?” he said.

Mincing no words, activist Carol Pagaduan-Araullo said this was a “garbage” perspective that implies no objective way for future generations to study history.

“Are we saying everybody is doomed just to go by what they directly experienced? That is a useless theory that pretends to be above it all but in reality defends the Marcoses,” she said.

Aquino on Monday told ANC that his tweet was not an apology for Marcos and argued that if there would be any remembering of martial law, it should be comprehensive.