MANILA, Philippines — Several journalists took time out from coverage on Monday, the 48th anniversary of the declaration of martial law, to take part in the launching of “Masked Media,” a campaign of the National Union of Journalists of the Philippines (NUJP) calling for the upholding of press freedom under the administration of President Rodrigo Duterte.

Several journalists joined the NUJP in a program at the Bantayog ng Mga Bayani, a shrine in Quezon City dedicated to the activists, including journalists, who fought the martial law regime, imposed in 1972 by President Ferdinand Marcos.

“Masked Media” is a play on the phrase “mass media” with an allusion to face masks, which have become mandatory for people going out in public to prevent the spread of COVID-19.

The campaign aims to heighten awareness of recent events — such as the red-tagging of journalists and activists, threats against media companies, the closure of ABS-CBN — that seem to be a repetition of those that happened during the martial law era.

“On this day 48 years ago, Ferdinand Marcos, then president of the Republic, subverted the democracy he was sworn to defend and declared martial law on false pretenses, letting loose a 14-year reign of terror that saw thousands killed, disappeared, tortured or jailed as the tyrant and the nation plundered by the dictator and his cronies,” the NUJP said in a statement. 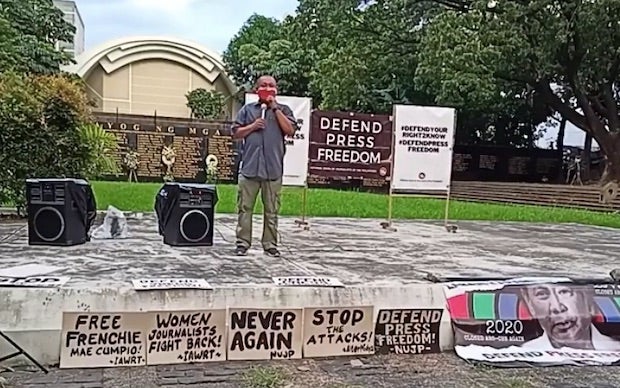 NUJP Secretary-General Raymund Villanueva speaks at the launching of Masked Media at the Bantayog ng Mga Bayani on Monday, Sept. 21, 2020. (Photo from a video uploaded by NUJP on its Facebook page)

“Today, we launch the ‘Masked Media’ campaign, not just to remember that dark incident in our history but also to send out the message that today, we face the same renewed efforts by another government, one led by an unabashed fan of Marcos, to suppress freedom of the press and pervert the truth,” NUJP added, alluding to President Duterte.

During the program at the Bantayog ng Mga Bayani, several journalists also spoke on the importance of recognizing big threats facing press freedom in the country.

“We chose this day though we know that we have a lot to cover. We chose this place not because it’s the only place available… We are not here just to remember them. We are here because there’s a similarity of their time with our time,” NUJP Secretary-General Raymund Villanueva said in Filipino.

“When Ferdinand Marcos declared martial law, ABS-CBN and other independent media organizations were among the companies ordered closed. We can see that what happened 48 years ago is very similar to what is happening now in our time. That’s why we came here, not just to remember them, but to continue with what they stood for, what they fought for,” he added.

Marcos’s 21-year rule was marred by massive corruption and plunder, extrajudicial killings, and the silencing of most journalists, leaving the reporting to allies who would publish only good news about the administration.

As the NUJP pointed out, ABS-CBN was shut down then, and it was shut down now, with the National Telecommunications Commission slapping the network with a cease and desist order last May 5.

This effectively stopped all of its free television and radio broadcasts nationwide.

President Duterte distanced himself from the shutdown, but several critics believed that he had a hand in the move of the House of Representatives not to grant the network renewal of its franchise, noting that he had repeated several times that he would see to it that the network would be closed.

In Monday’s program, the NUJP also called out the red-tagging of journalists that resulted in attacks, sometimes physical, against them.

The NUJP has been one of the frequent targets of administration supporters who kept identifying it as a legal front of the Communist Party of the Philippines (CPP).

Journalists continue to be killed, with an online commentator recently shot dead by gunmen on a motorcycle, making him the 14th reporter killed during Duterte’s term.

As part of the Masked Media launching, NUJP also started a fund-raising event, selling face masks bearing the Masked Media symbol — a glowing red hand placed over the mask which against a backdrop of newspapers. The masks sold for P150 each.

Proceeds of the sale, the NUJP said, would go to the Defense Fund for Filipino Journalists.

“But we remember the past, not in defeat or resignation, but in the spirit of those who defied the dictator, from the clandestine mosquito press, to the alternative media of the time,” NUJP said in its statement.

“Today, we honor them. And as we do so, we honor the people whose thirst for the truth they served and who, in turn, helped protect them; the people who would, in the end, rise up and throw off the shackles of tyranny,” it added.