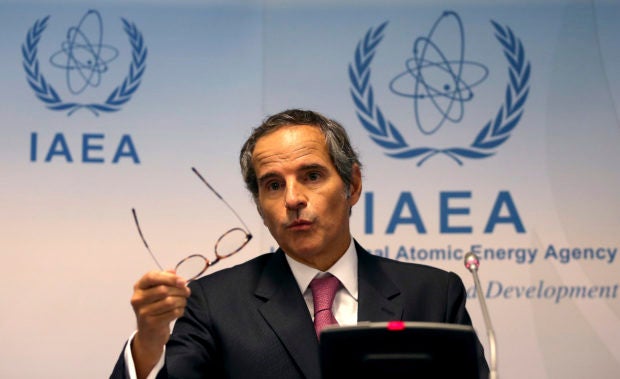 Director-General of International Atomic Energy Agency, IAEA, Rafael Mariano Grossi from Argentina, addresses the media during a news conference after a meeting of the IAEA board of governors at the International Center in Vienna, Austria, Monday, Sept. 14, 2020. (AP Photo/Ronald Zak)

BERLIN — The head of Iran’s nuclear agency said Monday that the landmark 2015 deal between Tehran and world powers on his country’s atomic program is struggling since the unilateral U.S. withdrawal, but is still worth preserving.

Ali Akbar Salehi told delegates at a conference of the International Atomic Energy Agency in Vienna that the so-called Joint Comprehensive Plan of Action, or JCPOA, has been “caught in a quasi-stalemate situation” since President Donald Trump pulled the U.S. out in 2018.

The deal promises Iran economic incentives in exchange for limits on its nuclear program. The remaining world powers in the deal — US — have been struggling to offset re-imposed American sanctions.

Iran has been steadily breaking restrictions outlined in the deal on the amount of uranium it can enrich, the purity it can enrich it to, and other limitations in order to pressure those countries to do more.

Salehi, speaking in a video address, said it’s of the “utmost importance” that those countries find a solution to resolve “the difficulties caused by the illegal withdrawal of the U.S. from the deal.”

“There is still a broad agreement among the international community that the JCPOA should be preserved,” he said.

Speaking after Salehi, U.S. Energy Secretary Dan Brouillette made no reference to the deal, saying only that the “United States remains committed to addressing the threats posed by the nuclear programs of both North Korea and Iran.”

“On top of its horrific record as the world’s largest state sponsor of terrorism, Iran has a lamentable history of providing only grudging, dilatory, and incomplete cooperation, if at all, with the IAEA. Iran must do more, much more, to ensure both timely and complete compliance with the safeguards obligations,” he said.

The ultimate goal of the JCPOA is to prevent Iran from being able to build a nuclear bomb — something Iran insists it does not want to do.

Though it has broken the pact’s limitations, it still has far less enriched uranium and lower-purity uranium than it had before signing the deal.

It has also continued to allow IAEA inspectors full access to its nuclear facilities, which the world powers still in the deal maintain is reason enough to try and keep it in place.

Iran recently granted the IAEA access to two sites dating from before the deal, which Director-General Rafael Grossi said he hoped “will reinforce cooperation and enhance mutual trust.”