Rep. Yap: Disagreements over 2021 nat’l budget not due to solons’ ‘pork’ 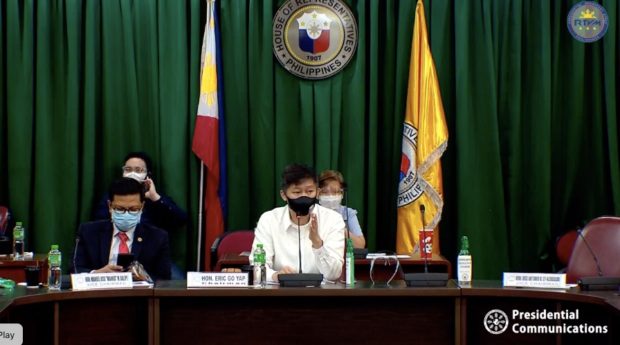 House committee on appropriations led by ACT-CIS party-list Rep. Eric Yap holds deliberations on the Office of the President’s proposed budget for 2021. Screenshot from House of Representatives’ youTube.

MANILA, Philippines — The recent disagreements among some members of the House of Representatives over the proposed 2021 national budget are not because of unequal distribution of pork funds, House appropriations committee chair Rep. Eric Yap said Monday.

Yap, of ACT-CIS party-list, made the statement in response to Bayan Muna Rep. Carlos Zarate who said that the recent quarrel between his colleagues at the lower chamber over alleged favored funding for certain legislative districts are clearly matters of pork.

(I do not understand why Congressman Zarate is saying that it is pork. First of all, the disagreements are over parochial concerns.)

(For example, I’m in Benguet, I am the congressman there. I have the right to ask the executive if they can give us funds for roads, bridges, things that we need in our province.)

But these funds are not “pork” allocations, said Yap, adding that distribution of public funds between congressional districts were never the same.

(It doesn’t mean that these are pork. It’s not. This is for the roads, for hospitals, and uneven distribution has never been the same.)

(Think of Batanes, if they will be given P8 billion, where will they put those funds for infrastructure projects?)

Yap said there will be a majority caucus to settle the disagreements over the budget.

This led to Teves and Villafuerte firing back allegations against each other—to the point that the two congressmen had a heated argument over Viber.

In an interview with INQUIRER.net, Teves even challenged Villafuerte to a fistfight.

(He should let me know if he wants to be in a fistfight. Even in plenary, he is all words.)