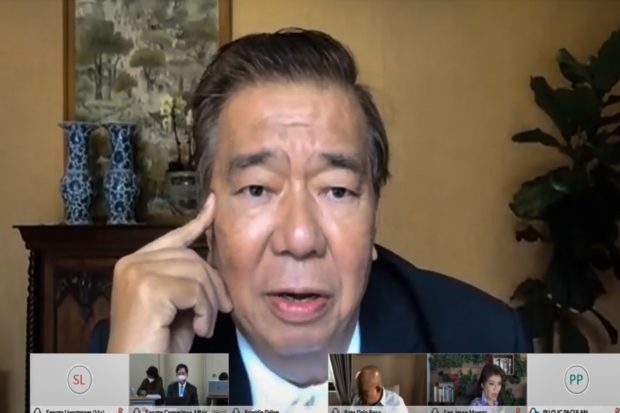 MANILA, Philippines — Senate Minority Leader Franklin Drilon on Monday expressed hopes that the “power struggle” in the House of Representatives will not derail the timely enactment of the 2021 national budget.

“A power struggle in the House will affect our timelines. I hope not because we are still in the middle of a pandemic. We have about 10 percent unemployment and we’re expected to have a contractionary economy,” Drilon said in an interview on ABS-CBN News Channel.

“A delay in the budget will be critical. So we can only express hope that this power struggle, which is the business of the House, will not derail our budget preparations. We cannot delay the budget for 2021 because of the situation we are in today,” he added.

Both houses of Congress are currently deliberating the P4.5 trillion national budget for 2021.

Over the weekend, House Deputy Speaker and presidential son Paolo Duterte threatened to declare as vacant the seats of Speaker Alan Peter Cayetano and deputy speakers amid the ongoing speakership row fueled by the “disparity” in infrastructure budget allocations in their respective districts.

“We’re not talking in theory, we actually experienced this power struggle in the House that caused the delay in the budget. How will this affect [the budget]? The budget provides the spending authority for the government,” Drilon said.

If there is a delay in the approval of the budget, the government would have to operate under a reenacted one, according to the minority leader.

“If there is no spending authority because there is no budget or there’s a delay in the budget, what will happen is that there is a reenacted budget and a reenacted budget will mean that the new programs will not be funded under the 2021 General Appropriations Act and will have to wait until its enactment, the effects will be terrible,” he added.

Drilon said the timely passage of the national budget for next year is “very critical” for the country’s economy given the impact inflicted by the coronavirus pandemic.

“We expect the economy, our gross domestic product to contract by about anywhere from six to nine percent by the end of the year. If we again delay the General Appropriations Act in 2021, you do not expect recovery in our economy or the recovery will be derailed,” Drilon said.

“It’s very critical more than any other time in the past, it is critical that the budget be enacted on time,” he added.