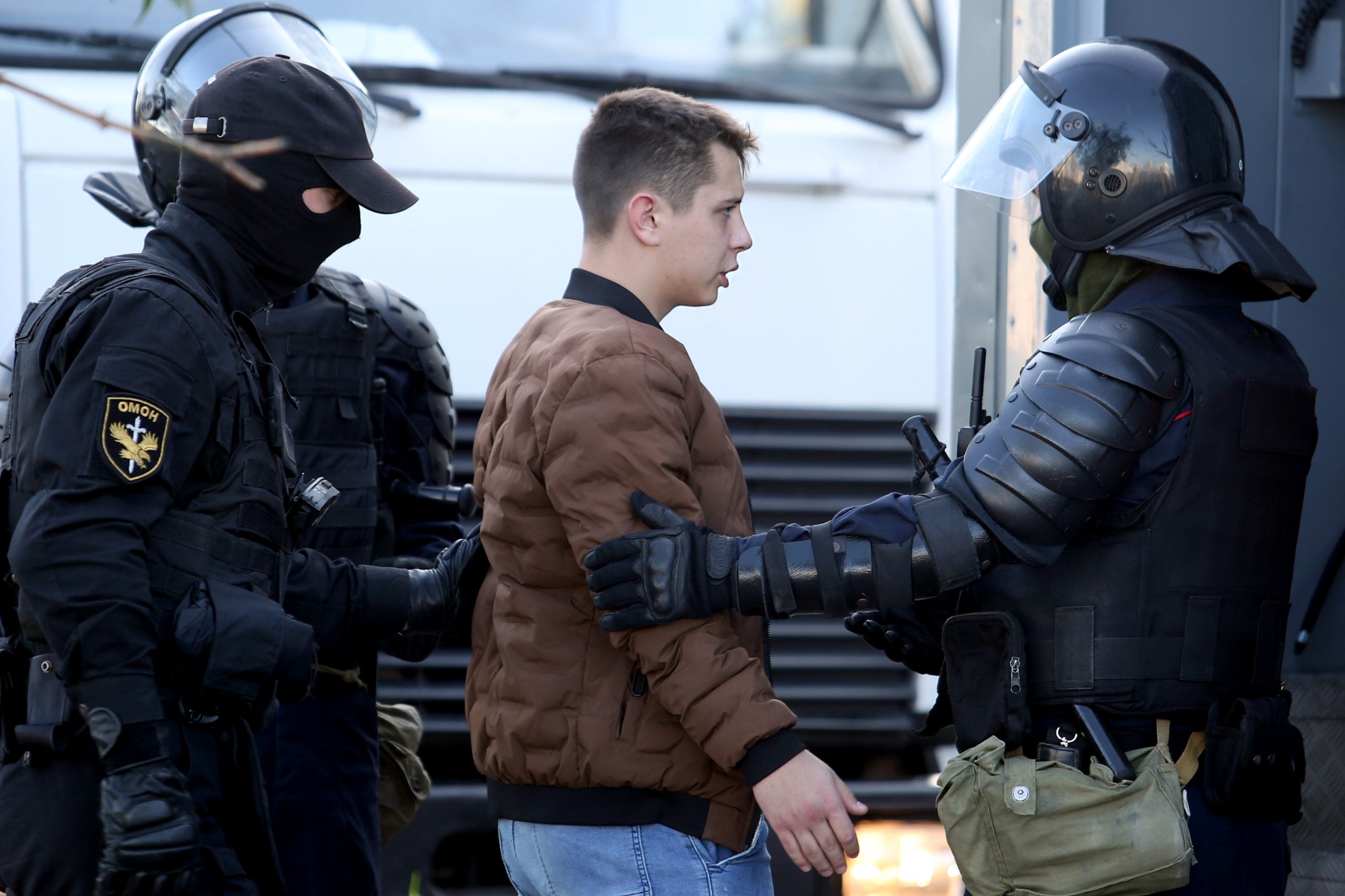 A man is arrested by Police on September 20, 2020, in Minsk on the sidelines of a demonstration called by opposition movement for an end to the regime of authoritarian leader Alexander Lukashenko. – Belarusian authorities brought today military trucks and barbed wire into central Minsk ahead of a planned opposition march, a day after police detained hundreds of women demonstrators. (Photo by – / TUT.BY / AFP)

MINSK, Belarus — Tens of thousands of opposition supporters marched in the Belarusian capital of Minsk on Sunday despite authorities deploying a heavy police presence.

The protest came a day after officers detained hundreds of demonstrators at a women’s march in the capital.

The opposition movement has kept up a wave of large-scale demonstrations every Sunday since President Alexander Lukashenko won a disputed victory in August 9 polls.

People holding red-and-white protest flags gathered at the “March of Justice” that occupied the whole of a central avenue and walked towards the heavily guarded Palace of Independence, where Lukashenko has his offices.

They held placards with slogans such as “Cowards beat up women” and “Get out!”.

Before the march, police and internal troops had positioned military trucks and armored personnel carriers in the city center and set up barbed wire.

Riot police in black balaclavas sporadically detained protesters carrying flags and signs at the start, while some people took shelter in a shopping mall and in a fast-food restaurant to escape arrest.

The Viasna rights group said at least 16 had been detained in Minsk as well as eight at protests in other cities.

The government ordered a reduction in mobile internet coverage during the event while central metro stations were closed.

The mass protest came after riot police cracked down on peaceful women demonstrators on Saturday who were wearing shiny accessories for their so-called “Sparkly March.”

They dragged protesters into vans, lifted some women off their feet, and carrying them.

Belarusian interior ministry spokeswoman Olga Chemodanova said Sunday that police had detained 415 people on that march in Minsk and 15 in other cities for breaking rules on mass demonstrations. She said 385 had been released.

The scale of Saturday’s detentions prompted the opposition’s Coordination Council to warn of a “new phase in the escalation of violence against peaceful protesters.”

Among those detained was one of the most prominent faces of the protest movement, 73-year-old activist Nina Baginskaya, although she was later released.

The aggressive police tactics prompted an opposition Telegram channel, Nexta, which has more than 2 million subscribers, to publish what it said was a list of the names and ranks of more than 1,000 police.

Protesters have sought to expose the identity of police who appear at demonstrations in plain clothes or in uniforms without insignia or name badges, trying to pull off their masks and balaclavas.

Opposition leader Svetlana Tikhanovskaya, who claimed victory over Lukashenko in the polls and has taken shelter in Lithuania, on Saturday said Belarusians were ready to strip police obeying “criminal orders” of anonymity.

Lukashenko has dismissed opposition calls for his resignation and sought help from Russia’s President Vladimir Putin, who has promised law enforcement backup if needed and a $1.5 billion loan.

Tikhanovskaya is set to meet European Union foreign ministers in Brussels on Monday as the EU prepares sanctions against those it blames for rigging the election and the regime’s violent crackdown on protesters.

Authorities have jailed many of Tikhanovskaya’s allies who formed the leadership of the Coordination Council or driven them out of the country.

One of her campaign partners, Maria Kolesnikova, has been imprisoned and charged with undermining national security.

She released a message to protesters on Sunday saying: “Freedom is worth fighting for. Don’t be afraid to be free!”.