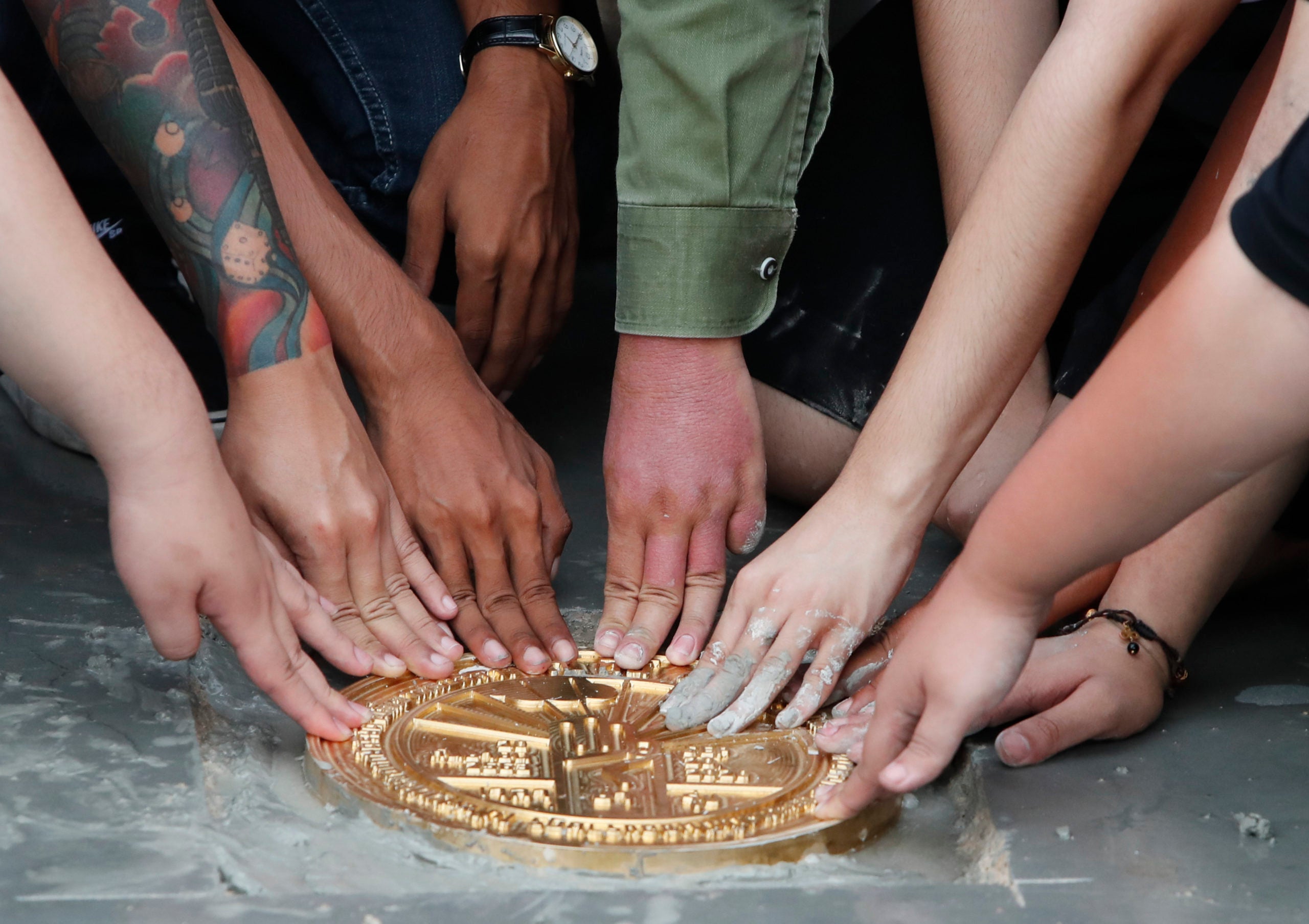 Pro-democracy student leaders install a plaque declaring “This country belongs to the people” at the Sanam Luang field during a protest in Bangkok, Thailand, Sunday, Sept. 20, 2020. Anti-government demonstrators occupying a historic field in the Thai capital on Sunday installed a plaque symbolizing the country’s transition to democracy to replace the original one that was mysteriously ripped and stolen three years ago, as they vowed to press on with calls for new elections and reform of the monarchy. (AP Photo/Sakchai Lalit)

BANGKOK — Anti-government demonstrators occupying a historic field in the Thai capital on Sunday installed a plaque symbolizing the country’s transition to democracy to replace the original one that was mysteriously ripped out and stolen three years ago, as they vowed to press on with calls for new elections and reform of the monarchy.

The mass student-led rally that began Saturday was the largest in a series of protests this year, with thousands camping overnight at Sanam Luang field near the royal palace in Bangkok.

A group of activists drilled a hole in front of a makeshift stage and, after Buddhist rituals, laid down a round brass plaque in cement to commemorate the 1932 revolution that changed Thailand from an absolute monarchy to a constitutional monarchy.

“At the dawn of Sept. 20, here is where the people proclaim that this country belongs to the people,” read part of the inscription on the plaque. In April 2017, the original plaque vanished from Bangkok’s Royal Plaza and was replaced by one praising the monarchy.

“The nation does not belong to only one person, but belongs to us all,” student leader Parit “Penguin” Chirawak told the crowd. “Therefore, I would like to ask holy spirits to stay with us and bless the people’s victory.”

Another activist, Panusaya Sithijirawattanakul, said their demands do not propose getting rid of the monarchy. “They are proposals with good intentions to make the institution of the monarchy remain graciously above the people under democratic rule,” Panusaya said.

Still, such calls took the nation by surprise. Protesters’ demands seek to limit the king’s powers, establish tighter controls on palace finances, and allow open discussion of the monarchy. Their boldness was unprecedented, as the monarchy is considered sacrosanct in Thailand, with a harsh law that mandates a three- to a 15-year prison term for defaming it.

The protesters later attempted to march toward the Grand Palace to hand over a petition seeking royal reforms to the head of the Privy Council, the king’s advisers but were blocked by police barricades. One of them, Panusaya, was allowed to deliver the petition, which was addressed to the king. It was received by a police official, who promised to forward it to the council.

Just before the rally ended, Parit called for a general strike on Oct. 14, the anniversary of a popular student uprising in 1973 that ended a military dictatorship after dozens were killed by police. He also called for another protest Thursday outside parliament to follow up on their demands.

Organizers had predicted that as many as 50,000 people would take part in the weekend’s protest, but Associated Press reporters estimated that around 20,000 were present by Saturday evening.

“By holding their protest on Sanam Luang — a long-time site of recreation and protest for the people, taken over in recent years by the monarchy — the protestors have won a significant victory,” said Tyrell Haberkorn, a Thai studies scholar at the University of Wisconsin-Madison.

“Their resounding message is that Sanam Luang, and the country, belong to the people.”

The crowd was a disparate batch. They included an LGBTQ contingent waving iconic rainbow banners while red flags sprouted across the area, representing Thailand’s Red Shirt political movement, which battled the country’s military in Bangkok’s streets 10 years ago.

There were skits and music, and speakers gave fiery speeches late Saturday accusing the government of incompetence, corruption in the military, and failing to protect women’s rights. At least 8,000 police officers were reportedly deployed for the event.

“The people who came here today came here peacefully and are really calling for democracy,” said Panupong Jadnok, one of the protest leaders.

Their core demands were the dissolution of parliament with fresh elections, a new constitution and an end to intimidation of political activists.

They believe that Prime Minister Prayuth Chan-ocha, who as army commander led a 2014 coup toppling an elected government, was returned to power unfairly in last year’s general election because the laws had been changed to favor a pro-military party. Protesters say a constitution promulgated under military rule is undemocratic.

The students are too young to have been caught up in the sometimes violent partisan battles that roiled Thailand a decade ago, said Kevin Hewison, a University of North Carolina professor emeritus and a veteran Thai studies scholar.

“What the regime and its supporters see is relatively well-off kids turned against them and this confounds them,” he said.

The appearance of the Red Shirts, while boosting the protest numbers, links the new movement to mostly poor rural Thais, supporters of former populist billionaire Prime Minister Thaksin Shinawatra, who was ousted in a 2006 coup. Thaksin was opposed by the country’s traditional royalist establishment.

The sometimes violent struggle between Thaksin’s supporters and the conservative foes left Thai society polarized. Thaksin, who now lives in exile, noted on Twitter on Saturday that it was the anniversary of his fall from power and posed the rhetorical question of how the nation had fared since then.

“If we had a good government, a democratic government, our politics, our education and our healthcare system would be better than this,” said protester Amorn Panurang. “This is our dream. And we hope that our dream will come true.”

Arrests for earlier actions on charges including sedition have failed to faze the young activists.

They had been denied permission to enter the Thammasat University campus and Sanam Luang on Saturday, but when they pushed, the authorities retreated, even though police warned them that they were breaking the law.