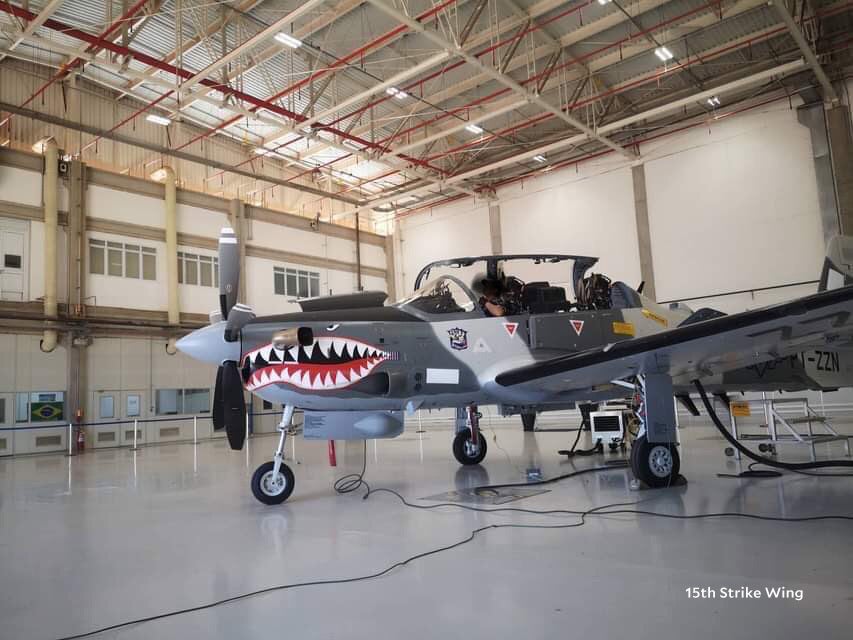 One of the Philippine Air Force’s A-29B Super Tucano attack aircraft at Embraer’s hangar in Sau Paolo, Brazil in late 2019.

MANILA, Philippines—Six brand new Brazilian-made attack aircraft are expected to be delivered to the Philippines over the weekend as part of the country’s continuing effort to modernize its ill-equipped armed forces.

Embraer’s A-29B Super Tucano planes will land at the former US air base in Clark, Pampanga on Saturday (Sept. 19), sources and flight trackers said. The delivery was originally set in late 2019 but it had been pushed back a few times for still unknown reasons.

The planes will be flown in by Brazilian pilots, although Philippine Air Force (PAF) pilots had already started training on how to fly the aircraft.

The planes will be formally turned over to the PAF next week.

The six attack planes are part of a P4.9 billion deal signed by the Philippine government with Embraer in 2017. They were envisioned for deployment for close air support, light attack, surveillance, air-to-air interception and counterinsurgency operations.

The turboprop planes will be part of the PAF’s 15th Strike Wing, and will support and eventually fully replace the Air Force’s remaining OV-10 Bronco and SF-260 attack planes.

Embraer described the Super Tucanos as “durable, versatile, and powerful turboprop aircraft capable of carrying out a wide range of missions, even operating from unimproved runways.”

At least 14 air forces around the world are using the Super Tucano.