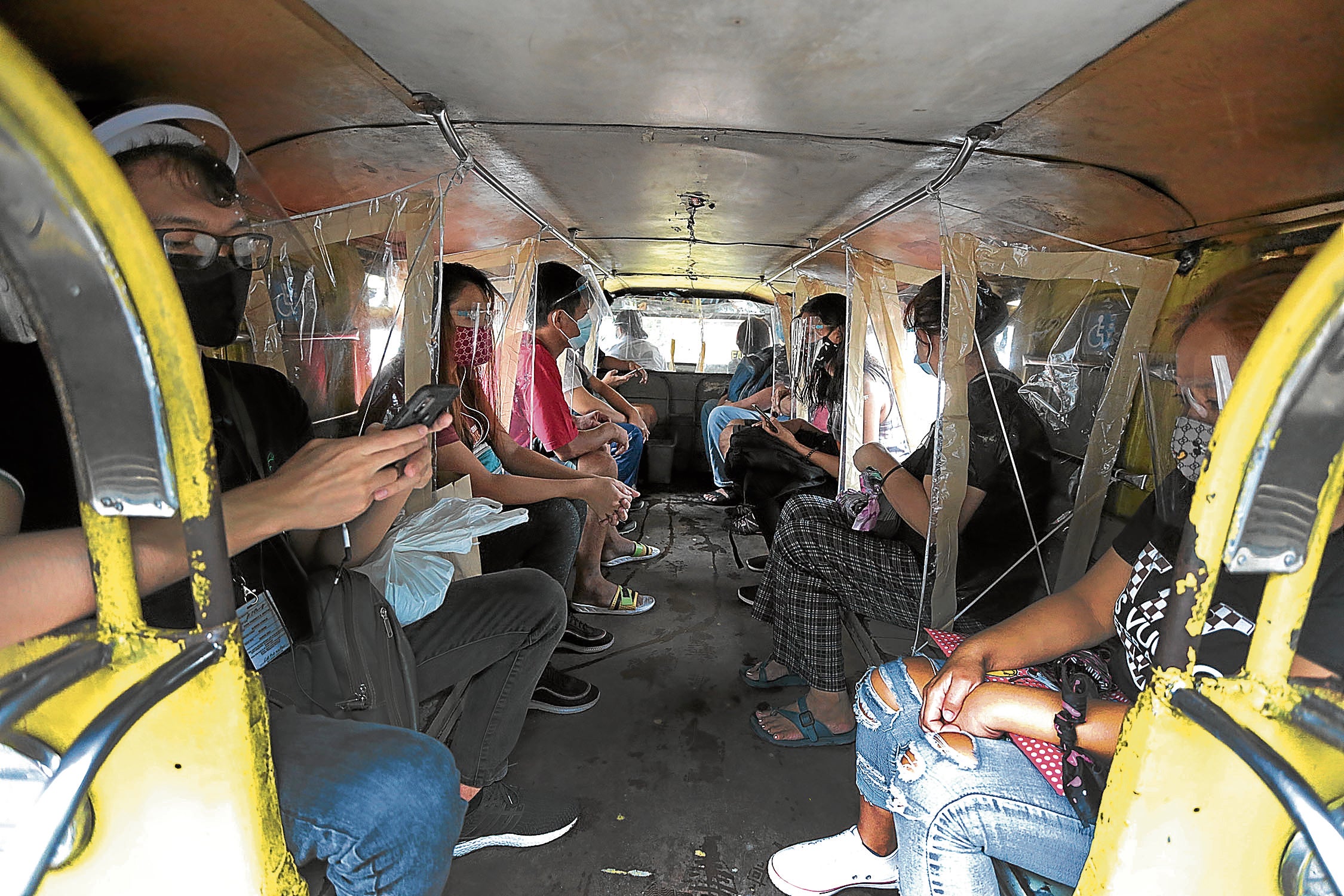 PASSENGER PROTECTION Plastic dividers separate passengers on this jeep about to leave the Tandang Sora jeepney terminal in Quezon City on Thursday. The dividers are set 1 meter apart but if the Department of Transportation had its druthers, the separation would be reduced to 0.3 meter by the end of September. —GRIG C. MONTEGRANDE

MANILA, Philippines — The government on Thursday suspended a policy reducing physical distancing on public transport to less than a meter as the Department of Health (DOH) reported more than 3,300 additional COVID-19 cases and over 50 more deaths from the severe respiratory disease.

Citing the need for more Filipinos to go to work to expand economic activity and for the public transport sector to recover from the slump, the Department of Transportation (DOTr) enforced the policy on Monday, easing the distancing rule from 1 meter to 0.75 meter on trains and public utility vehicles. The department said the distance would be further reduced to 0.5 meter after two weeks and to 0.3 meter at the end of September.

At the same time, the Land Transportation Franchising and Regulatory Board (LTFRB) reopened 28 jeepney routes in Metro Manila and allowed more than 1,000 jeeps more to return to the road, raising to more than 17,000 the number of jeepneys to ferry workers to their jobs in the 16 cities and one town in the metropolis.It didn’t work. Businesses reported no immediate increase in the numbers of employees coming back for work, while many commuters expressed fear of contracting the new coronavirus that causes COVID-19 on suddenly half-full trains and buses and nearly crowded jeepneys.

The medical community was divided, with some groups questioning the science behind the policy and insisting on the 1-meter distance recommended by the World Health Organization (WHO) and other groups claiming the new rule was safe so long as commuters wore masks and face shields, kept quiet and avoided using cell phones on public transport.

Malacañang said the reduction was approved by the Inter-Agency Task Force for the Management of Emerging Infectious Diseases, the temporary government body that oversees the government’s coronavirus response, but the DOH, the lead agency on the panel, refused to state categorically whether it supported the change. Health Undersecretary Maria Rosario Vergeire said the matter was still under discussion by the task force.

Health Secretary Francisco Duque III and Interior Secretary Eduardo Año, the two top Cabinet officials on the coronavirus response task force, opposed the DOTr move during a meeting of the group with President Duterte on Monday.On Wednesday, the Metro Manila Council said the 17 mayors in the metropolis were not consulted about the reduction and that their stand was to maintain the 1-meter rule.

On Thursday, a group of public transport workers and their supporters challenged government officials and executives from business groups to commute for 30 days under the new DOTr policy to experience the risks commuters put themselves through in traveling across the metropolis.

The Move As One Coalition urged policymakers to understand those risks first before they reduce the physical distancing rule on public transport.

“Flighty policymaking, especially if unsupported with data and evidence, brings nothing good to the communities,” said Ralph Degollacion of the public health think tank HealthJustice Philippines.

The groups’ dare came as the DOH reported 3,375 additional coronavirus infections, bringing the overall number of confirmed COVID-19 cases in the country to 276,289.

Of the additional cases identified by 116 of 126 accredited laboratories, 963 came from Metro Manila, 448 from Bulacan, 274 from Cavite, 153 from Negros Occidental, and 119 from Batangas.

The DOH said 317 more patients had recovered, raising the total number of COVID-19 survivors to 208,096. But the death toll increased to 4,785 with the deaths of 53 more patients.

As of Thursday, the country had 63,408 active cases, of which 87.5 percent were mild, 8.7 percent asymptomatic, 1.1 percent severe,and 2.7 percent critical.After three days of battering, the DOTr stepped back on Thursday.

Presidential spokesperson Harry Roque announced the suspension of the reduction, saying Transportation Secretary Arthur Tugade himself gave the order to return to the WHO standard.

Roque said a study on the matter had been submitted to President Duterte, who would announce his decision next week, probably Monday.

The DOTr, however, found an ally in a group of health experts led by former Health Secretary Manuel Dayrit, who claimed during Roque’s news briefing on Thursday that the WHO standard was “not dogma” and that the UN agency had recommended to countries to apply COVID-19 measures depending on their individual situations.

Dayrit pointed to Japan, where he said the 1-meter rule was not required on public transport at any time and that commuters only wore masks and sat quietly.

“It is possible to go below 1 meter if there is proper implementation of the combined package of interventions,” Dayrit said, referring to distancing, wearing of masks and face shields.Besides those, Dayrit’s group recommended silence and adequate ventilation on public transport, frequent disinfection and no passengers with COVID-19 symptoms.

Dayrit stressed that compliance with health measures is important as the country begins to ease public transportation restrictions to spur economic recovery.

“The reason we are doing this is because we are trying to balance [health] with the [need to reopen the economy]. There’s your trade-off. But really, the trade-off doesn’t leave us defenseless, that’s what we are saying,” he said.

Business groups and professional organizations supported Dayrit’s group’s stand, saying in a statement that “[p]eople should practice physical distancing where appropriate, but be given alternative options to relax these requirements where the risks are manageable.”

Roque said the maximum number of public utility vehicles that could be allowed to operate had been reached.

“The solution now is to increase the number of passengers allowed [on] public transport. The [task force] and the DOTr [have] considered all these,” he said.

Roque added that drivers of public utility vehicles would receive aid from the government under the second coronavirus relief law to help them “break even, plus a little profit of about 20 percent.” —reports from Julie M. Aurelio, Christine O. Avendaño, Tina G. Santos and Mariejo S. Ramos