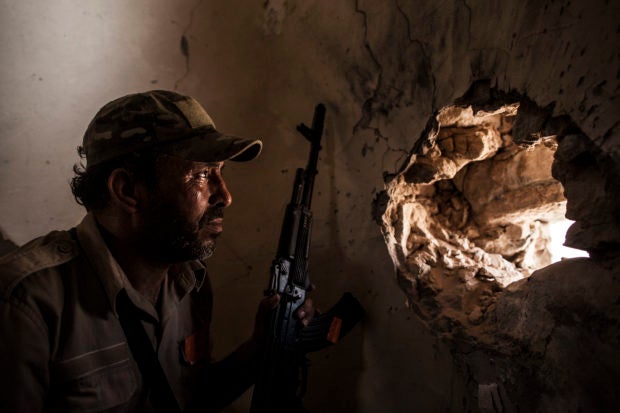 FILE – In this Sept. 22, 2016, file photo, a fighter of the Libyan forces affiliated to the Tripoli government scans for targets from the minaret of a mosque in Sirte, Libya. The warring parties in Libya and their international backers — the United Arab Emirates, Russia and Jordan vs Turkey and Qatar — violated a U.N. arms embargo on the oil-rich north African country that remains “totally ineffective,” U.N. experts said in a new report. (AP Photo/Manu Brabo, File)

CAIRO  — The head of Libya’s U.N.-supported government said Wednesday night that he wants to hand over power to a new administration in October amid talks on ending the country’s conflict.

“I announce to everyone my sincere desire to hand over my duties to the next executive authority, no later than the end of next October,” Fayez Serraj declared in a televised speech from the capital, Tripoli.

He said the talks between the country’s rival factions have led to a “new preparatory phase” to unify Libyan institutions and prepare for parliamentary and presidential elections.

Libya’s factions agreed earlier this month to hold elections within 18 months and appoint a new government. They are expecting to meet soon for more talks.

Libya was plunged into chaos when a NATO-backed uprising in 2011 toppled longtime ruler Moammar Gadhafi, who was later killed. The country has since split between rival east- and west-based administrations, each backed by armed groups and foreign governments.

A rift within the Tripoli-based government surfaced last month amid protests over power cuts and corruption in the capital and other cities in western Libya. There were similar demonstrations elsewhere in east and south Libya.

Sarraj, a member of the eastern parliament in Tripoli, was appointed in 2015 to lead the presidential council, created by a political agreement that was signed by Libya’s factions in Skhirat, Morocco.

That agreement failed in its aim of creating a national government in Tripoli and ending the divide between the rival parliaments, governments and military coalitions in the oil-rich country, and the conflict morphed into a bloody civil war.

Eastern-based military commander Khalifa Hifter launched an offensive last year that drove to the suburbs of Tripoli, but his campaign collapsed in June when the Tripoli-allied militias, with heavy Turkish support, gained the upper hand.

The Tripoli fighters then drove Hifter’s forces from the outskirts of the city and from other western towns.

Fighting has died down in recent weeks amid intensive international efforts, including from the United States, to establish a lasting cease-fire and avert a battle over the strategic city of Sirte, the gateway for vital oil facilities.