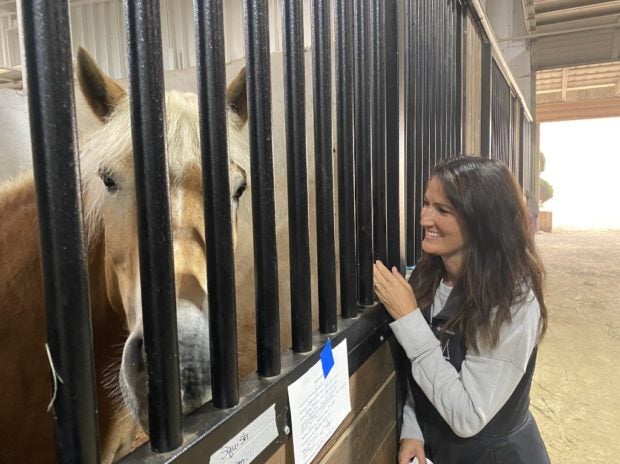 Brandi Hatch, the facility director of Mount Hood Center, comforts a rescued horse in Boring, Oregon on September 13, 2020. Oregon residents and their animals are taking refuge from the many wildfires burning across the state. Photo by Cyril JULIEN / AFP

BORING, United States — An equestrian center in Oregon that opened its doors to horses displaced by raging forest fires soon found its stalls home to almost an entire farmyard — including pigs, ducks, donkeys and even an ox.

Last week, staff at the Mount Hood Center in Boring, east of Portland, offered refuge to owners and their horses fleeing the West Coast blazes that have torched an area roughly the size of the state of New Jersey and killed at least 35 people.

In just a few hours each one of their 80 stalls had been filled, with desperate owners bringing in their horses, often from places just a few dozen miles (kilometers) away from the fires.

“People were desperate, they had nowhere to go — they were losing their homes, losing their barns, and certainly didn’t want to lose their animals,” said Aaron Shelley, director of operations at the center.

But it wasn’t just horses that came in two by two — the staff also welcomed an ox, donkeys, ponies, ducks and pigs.

“There were a lot of animals that were panicked and they were kicking and they were yelling. It sounded like this was a war zone in here with all the screaming and yelling,” Shelley said.

The horses in particular — used to being out in the open air — had to be kept calm by the staff.

“My staff did an amazing job,” Shelley said. “Walking the aisles, talking to the horses comforting them with nice words.”

Help also came from some locals who provided food for the animals, while pictures posted online by the center showed trucks arriving laden with donated hay and staff distributing it to the animals.

“We have all these empty stalls. It just was the natural thing to do,” said Brandi Hatch, the center’s director.

“It’s wonderful to see how people came together and helped us.”

Sarah Anderson, who works in the center, brought her four horses in on Wednesday.

“I brought the animals first, then I came back with my motorhome, and decided to camp here,” the 34-year-old said.

Her home in Eagle Creek had not been destroyed, but she did not know when she would be able to return.

Even though the horses are safe now from the fires, the dense smoke that fills the air is still a danger.

“With animals of this size, the danger is inhalation of fumes and the quality of the air,” said Anderson.

By Sunday, many had found more permanent shelters and had moved on, and there were only about 20 horses left in the center.

But with the fires still burning in the state, the staff are still on alert.

“You can’t predict who’s going to be affected next,” said Shelley. “We’re just keeping our doors open, to make sure we’re available for anybody who needs us.”