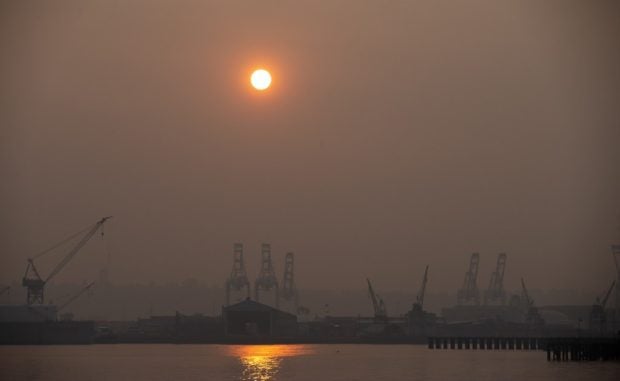 The sun casts a red glow over Elliott Bay as smoke from West Coast wildfires fills the air on September 11, 2020 in Seattle, Washington. According to reports, air quality is expected to worsen as smoke from dozens of wildfires in forests of the Pacific Northwest and along the West Coast descends onto the region. Lindsey Wasson/Getty Images/AFP

NEW YORK — Smoke from the fires ravaging the American West Coast traveled across the continent to reach the skies over New York on Tuesday, according to meteorological reports.

Thanks to strong pressure systems, the smoke was trapped along the western part of North America for days, making for potentially dangerous air quality in major cities such as Portland, Oregon and Vancouver and San Francisco.

But the weather shifted on Monday, carrying the smoke east along the jet stream. It was visible in National Weather Service (NWS) satellite photos from Monday evening.

Both the NWS and NY Metro Weather said the smoke would not cause air quality disruptions on the East Coast like the ones seen in California and elsewhere in the West, and it was expected to dissipate by Wednesday.