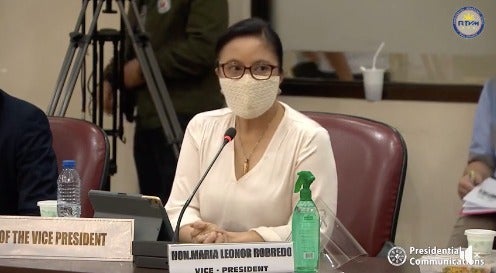 MANILA, Philippines — Several lawmakers lobbied for a higher budget for the Office of Vice President Leni Robredo for 2021, with some even proposing that the funding for the second highest office in the country be doubled.

During the hybrid hearing of the House committee on appropriations, Robredo herself presented the proposed budget of her office for 2021.

Robredo said their office submitted a budget proposal of P720 million, which is the same budget that the OVP had last year. However, the Department of Budget and Management (DBM) only approved P679 million.

The first one to express intent to increase the budget of the OVP was Camarines Sur Rep. Gabriel Bordado, saying that Robredo’s office has the “lowest budgetary allocation in the entire Philippine bureaucracy.”

“It has been engaging in frontline activities against COVID-19. It has also launched livelihood, education, people empowerment and other projects throughout the country, but still, its budget is still the smallest in the entire bureaucracy,” Bordado said.

Bordado said the budget of the OVP should be increased.

“We have to recalibrate the budget allocation considering the number of projects being implemented by the OVP, considering it’s in the forefront of the fight against COVID-19. There is an urgent need to increase its budgetary allocation,” Bordado said.

This was echoed by Cagayan de Oro Rep. Rufus Rodriguez, who said that the OVP has “worked hard” in implementing programs in housing, providing livelihood, and responding to the pandemic.

Rodriguez proposed that the budget of the OVP be increased by 10 percent, on top of the restoration of the P41 million budget slashed from the initial proposal of the office.

Meanwhile, Baguio City Rep. Mark Go proposed an even bigger increase in the funds of the OVP, saying it should be doubled.

Go likewise lamented DBM’s move to remove the acquisition of a new vehicle in the proposed 2021 budget.

‘We make do with what we have’

During the hearing, Robredo was asked how the OVP is able to sustain its various projects given its “miniscule appropriation.”

“We make do with what we have. That has always been how it was at the Office of the Vice President. When we started in 2016, we operated with a budget of just over P500 million,” Robredo said.

Robredo said the small budget “has never been a hindrance to us,” adding that they also look for private partners for their programs.

Robredo, however, said that it would “help us greatly” if they will be given more funds.