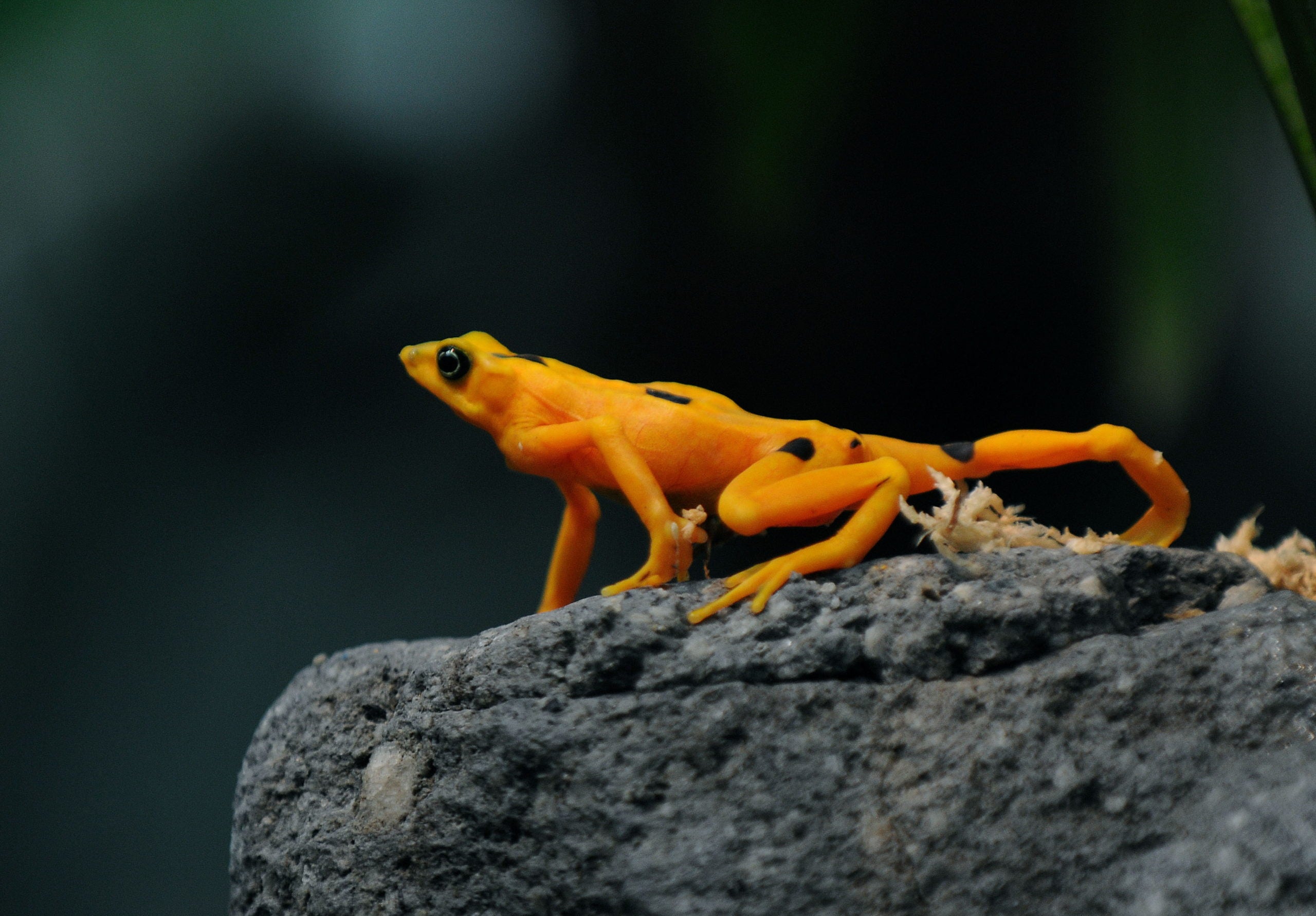 (FILES) This file photo taken on April 16, 2009 shows a golden frog (Atelopus zetequi) at the El Nispero del Valle de Anton zoo, 124 km east of Panama City. – Some two hundred golden frogs survive -in seclusion- as a devastating and uncontrolled fungus threatens to exterminate a third of the amphibian species in the country, a situation that scientists describe as “critical.” (Photo by ELMER MARTINEZ / AFP)

PANAMA CITY, Panama — Cocooned from the outside world, some 200 critically endangered golden frogs are living a sheltered existence in Panama, protected from a devastating fungus that threatens to wipe out a third of the country’s amphibian species — a situation scientists describe as “critical.”

The frogs, which are yellow or gold with black spots, enjoy a controlled environment inside fish tanks installed at the Smithsonian Tropical Research Institute (STRI), a 5,000-square-foot (465-square-meter) facility in Gamboa, north of Panama City.

Though endemic to the lush Central American country, no Panamanian golden frog can be seen in its natural habitat, threatened as it is by a so-called “super fungus” that has decimated amphibians in the wild.

According to a report by the World Wildlife Fund (WWF) published this week, the planet has lost more than two-thirds of its vertebrates in less than 50 years.

The situation is especially dire in the tropical areas of Central and South America, where the extent of loss is pegged at 94 percent.

Believed extinct in the wild, only about 1,500 of the tiny Panamanian golden frogs are found in zoos where they can reproduce.

But it is not only frogs that are vulnerable to the fungus. Toads, salamanders and caecilians — limbless amphibians similar to snakes — are also at risk.

“In Panama, we can say that about a third of the 225 species of amphibians are threatened in some way,” said STRI researcher Roberto Ibanez.

Gina Della Togna, a specialist in molecular and cellular biology at the University of Maryland, described the situation as “critical.”

The biggest threat posed to amphibians is chytrid fungus, which spreads through water.

The pathogen is responsible for chytridiomycosis, an infectious disease that scientists say has already caused the disappearance of some 30 species.

The fungus becomes embedded in the animal’s skin and infects it, causing it to be unable to exchange salts and water with the environment.

“When the fungus gets to a place where it wasn’t, it affects populations very much and animals die en masse. It causes certain death in the individuals it infects. It’s a devastating phenomenon,” said Della Togna.

The microorganism was first detected in the 20th century in the Korean Peninsula and scientists warn that it has already spread throughout the world.

“Anywhere in the world where there are amphibians, the fungus is already there,” said Estrada.

It arrived in Panama in the early 1990s and has been wreaking havoc ever since.

“It’s a super fungus that can even affect other species that are not amphibians,” according to Ibanez.

He warned that deforestation, environmental destruction, and pollution of streams and rivers caused by humans exacerbate the problem.

Despite the gloomy scenario, scientists point to some glimmers of hope, saying that in the past few years some species believed to have gone extinct have been re-discovered.

Specialists suspect that some amphibians have been able to bolster their defenses against infection.

“This gives us hope, knowing that some frogs are returning and that they have ways to counter-attack” the fungus, said Estrada.

Meanwhile, in Gamboa, the STRI maintains some 2,000 specimens from 12 frog species in the hope they can one day be released into the wild to fend for themselves.

“The idea is not to keep these animals in captivity forever. We want to be able to reestablish populations in their natural habitat,” said Ibanez.

To that end, Smithsonian researcher Della Togna is carrying out an assisted reproduction project, where she freezes the animals’ semen in order to impregnate the females and increase their numbers.

With great care, she injects hormones into the tiny frogs that appear to get lost in the palm of her hand.

“Of all the different animals, amphibians are the world’s most threatened,” Della Togna said.