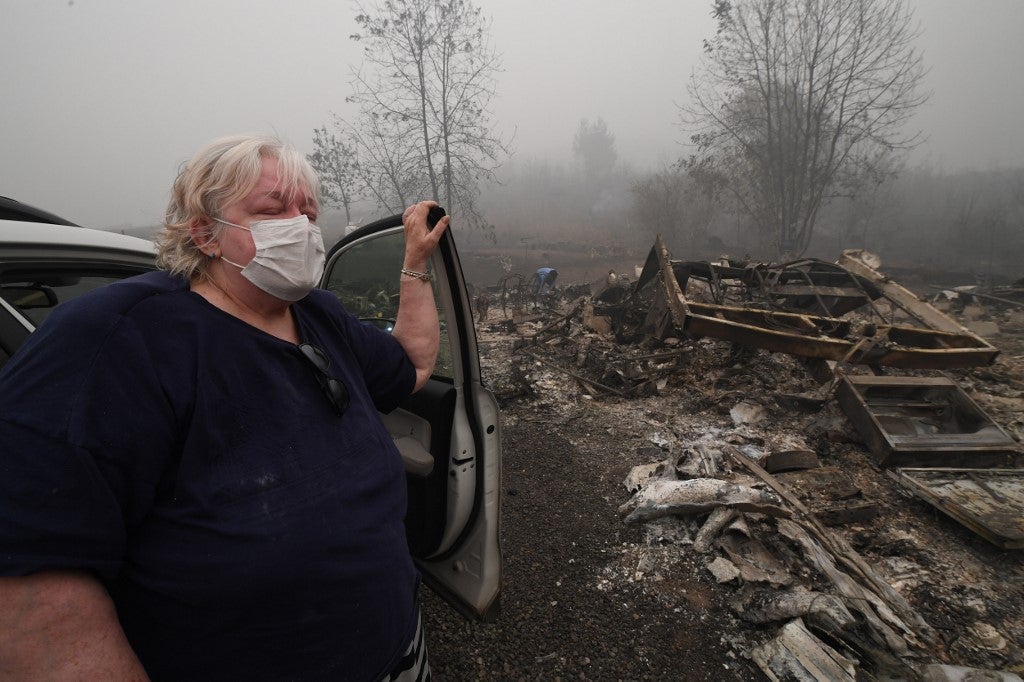 Resident Margi Wyatt arrives to find her mobile home destroyed by wildfire after she and her husband evacuated from the R.V. park earlier in the week, in Estacada, Oregon September 12, 2020. – US officials girded today for the possibility of mass fatalities from raging wildfires up and down the West Coast, as evacuees recounted the pain of leaving everything behind in the face of fast-moving flames. Dense smog from US wildfires that have burnt nearly five million acres and killed 27 people smothered the West Coast on September 12. (Photo by Robyn Beck / AFP)

ESTACADA, United States — “This is just stuff. We’re gonna move on from it,” says Margi Wyatt, holding back tears as she stares at her burned-out mobile home destroyed by one of the fires raging through the US state of Oregon.

The 70-year-old fled 50 kilometers from her home to Estacada in Portland’s southeast as the huge and still-uncontained Riverside Fire raced through.

The blaze devastated the mobile home site, located on a wooded hill next to a road. All the properties in Wyatt’s row were destroyed — but homes just ten meters away were left unscathed.

It is one of scores of infernos ravaging that have burnt through a record 2 million hectares and left at least 27 people dead.

With smoke still rising from the hill, she and her husband Marcelino Maceda have come back to sift through the remains and pick up anything that may have escaped the flames.

But there’s little left in the ashes. Among the belongings they find is a partially melted watch, a blackened bracelet and a ring.

“The police just told us to grab our things and go,” Wyatt said as the flames neared. “I gathered what I could in 20 minutes — cash, important papers, jewellery.”

Everything else, she says, is in the blackened remains of her home, which they moved into just two years ago.

But Wyatt — a retired caregiver — said she was glad that at least no-one was hurt, but adds: “I don’t want to come back. These are plastic houses. Our next move is a stick house.”

Luckier residents moved back in as soon as the evacuation order was lifted, and much of the site was occupied again on Saturday.

Six miles to the north, a dense pall of smoke smothered the centre of Estacada. Some of the city’s 3,500 inhabitants have returned despite the acrid air and are patrolling in cars to prevent robberies.

Matt Watts, semi-automatic rifle in hand and pistol in his belt, is standing watch at his property to keep potential pillagers at bay.

“I hear nothing but looters and arsons on the radio (scanner), I did not feel in fear of my house catching fire so I decided to hang around and protect it,” Watts says.

“I hope to be a deterrent for somebody that means harm.”

He says he has heard shots at night and seen cars with licence plates from other states, which make him suspicious.

For days rumours have spread that radical leftists have been lighting fires in Oregon — false information that was debunked by the local branch of the FBI.

But James, 29, says the robberies are a reality — and that he has lost about $15,000 worth of property, stolen from his workshop between Tuesday and Saturday.

“We had our Dune racer stolen. I’ve had a whole bunch of construction tools stolen. My motorcycle, the most recent thing we found out today, my motorcycle’s gone out of the shop. Yeah, just a lot of different tools really.”

He co-ordinates with his neighbours and they “come out at different times just to keep a watch on each other’s houses but outside of that we just had to monitor our cameras,” James says, pointing to images of the robbers.