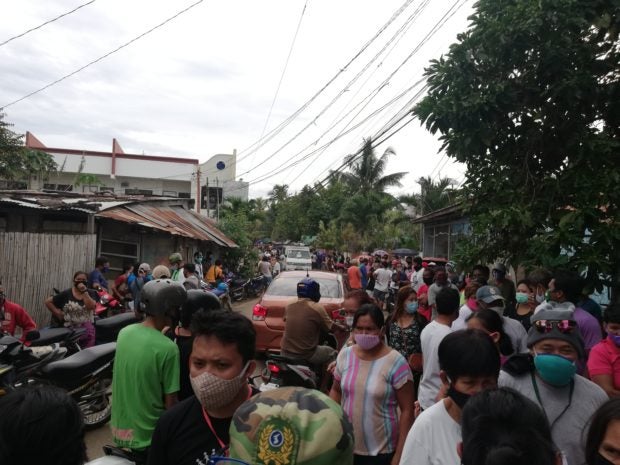 File photo shows residents of a barangay in Tagbilaran City, Bohol outside the covered court for the distribution of financial aid packages under the Social Amelioration Program (SAP). —LEO UDTOHAN

CEBU CITY – Nine barangay captains in Central Visayas are facing a six-month preventive suspension for alleged anomalies in the distribution of the first tranche of cash aid under the government’s Social Amelioration Program (SAP).

In a statement issued by the Department of the Interior and Local Government in Central Visayas (DILG-7) on Saturday, the nine officials—three from Bohol, five from Cebu, and one from Negros Oriental—were among the 89 barangay captains in the country who were suspended by the Office of the Ombudsman.

The anti-graft office, in an order dated September 2, said there was a need to suspend the village officials pending investigation since there was strong evidence to prove their guilt.

They were facing charges of serious dishonesty, grave misconduct, abuse of authority and conduct prejudicial to the best interest of the service.

Interior Secretary Eduardo Año directed the respective municipal and city mayors to immediately implement the order of the Office of the Ombudsman while the DILG regional and field officers must ensure its orderly implementation.

“May the suspension serve as a warning to other officials that corruption has no place in this government especially during this pandemic,” he said.

There were 447 suspects in the anomalies in the implementation of the SAP across the Philippines.

The government, under RA 11469, has set aside P200 billion in emergency subsidy ranging from P5,000 to P8,000, depending on prevailing regional minimum wage rates, to be given to about 18 million low-income families for two months.

Its target beneficiaries are families that belong to either the poor or informal sectors who had no means of income after the government imposed a lockdown to prevent the spread of SARS-CoV-2, the virus that causes the coronavirus disease 2019 (COVID-19).