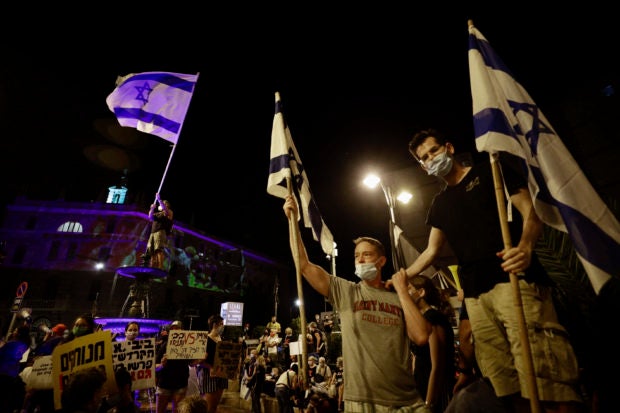 JERUSALEM  — Thousands of Israelis demonstrated outside Prime Minister Benjamin Netanyahu’s official residence in central Jerusalem late Saturday, demanding he resign over his trial on corruption charges and what is widely seen as his mishandling of the coronavirus pandemic.

With Israel reporting record levels of new coronavirus cases each day, the country appears to be headed toward a nationwide lockdown this week ahead of the Jewish New Year.

Saturday’s demonstration came a day after Israel announced an agreement to establish diplomatic relations with Bahrain, the second Arab country to normalize ties with Israel in under a month and just the fourth overall.

But the surprise announcement had little effect on the thousands of demonstrators, who have been gathering outside Netanyahu’s residence every Saturday throughout the summer.

Protests against Netanyahu over his corruption trial have expanded to include demonstrations against his handling of the health crisis and the resulting economic pain.

Israel earned praise last spring for its early handling of the virus crisis, moving quickly to seal the country’s borders and appearing to bring an outbreak under control.

But Netanyahu has come under criticism for reopening the economy too quickly in May. Since then, new cases have soared, the government has been blamed for mismanaging the resurgence and unemployment has soared to double digit levels.

Many struggling workers and business owners fear another closure will be devastating. Many of the demonstrators are unemployed.

Last week Netanyahu announced overnight curfews on some 40 cities and towns hit hard by the coronavirus, but backed away from reported recommendations for full lockdowns after an uproar by politically powerful religious politicians.

Netanyahu has been charged with fraud, breach of trust and accepting bribes for his role in a series of scandals involving gifts and alleged favors exchanged with wealthy associates.

He denies any wrongdoing and accuses police, prosecutors and the media of conspiring to oust him. He has dismissed the protesters as “leftists” and “anarchists.”