MANILA, Philippines – When the Department of Education (DepEd) began the virtual enrollment of millions of students in June, Janet Villamar, 44, braced for a conversation any parent fears.

Like millions of others, her family was being buffeted by the perfect storm of the COVID-19 pandemic and the economically devastating lockdown. Her husband, who had been eking out a daily income from selling old bottles to neighbors, was now cloistered at home.

It was thus with her back to the wall that Villamar gathered her four children at their home in Pandi, Bulacan province, to tell them they would have to sit out the coming school year.

“I said we have no gadgets, we have no money for supplies, maybe you can stop for now. They said it will be a waste to miss an entire year,” she recalled. “But what can I do?”

Villamar’s question echoes nationwide as parents confront the difficult choice of pulling their children from school or facing even worse financial straits. With the Oct. 5 opening of classes fast approaching, enrollment as of last week is still a little over 3 million short of what it was last school year.

The start of classes has been twice delayed, and officials are now readying a distance learning program for the 24.35 million children who did enroll for basic education this year.

The DepEd on Wednesday said it would accept late enrollees until November as long as they could attend 80 percent of the total class days for the school year.

Stakeholders warn that the millions missing from the rolls may become a “lost generation” of students—with broad consequences that can take years to undo.

“The quality of education is already dismal, but for a student to stop entirely is like double jeopardy,” said Joel Javiniar, a University of the Philippines (UP) professor who specializes in the economics of education. “Twice the loss, twice the tragedy.”

Philippine research has been sparse, but numerous global studies cite the perils of missing even just one year of school. For those who will return in 2021, it won’t be as simple as picking up where they left off; they would have actively lost years worth of academic gains.

And the losses are compounded over time. The World Bank has estimated that every additional year of schooling has a corresponding return of 8-10 percent of a student’s future income. Devastating as that is for even one student, for more than 3 million, it enters the realm of national crisis.

“Realistically, we run the risk of losing a generation that we really need to recover,” said Love Basillote, executive director of Philippine Business for Education (PBEd). “COVID-19 is not just this year. It will really ripple. It’s not just a health-care thing.”

In a position paper, PBEd calls on schools to open as soon as possible. Assuming that the return to a year of schooling is 9 percent, it says, the estimate is that the Philippines lost trillions of pesos just from the initial wave of school closures between March and August.

The impact then of millions of students losing a whole year can push the country into a perpetual game of catchup.

“The higher your learning is—it’s a proxy for human capital—the higher the GDP (gross domestic product) growth of a country is as well,” said Basillote, citing the well-documented correlation between GDP growth and scores on the Program for International Student Assessment, in which the Philippines ranked last in 2018.

Sitting out the school year can leave a lasting effect on students’ mental health and levels of motivation, said UP College of Education dean Jerome Buenviaje. Education “brings that sense of normalcy” that can be the students’ only safe harbor amid the pandemic, he said.

The DepEd has acknowledged the scale of the issue, telling senators at a hearing in August that it was discussing learning interventions for the unenrolled, which stood at 4 million at the time.

“As of this time, our main focus is those who have enrolled,” Education Undersecretary Nepomuceno Malaluan said then. “But we will discuss in greater detail this nonparticipation.”

Stakeholders point out, however, that stemming the potentially far-reaching crisis that could result from having so many dropouts is an urgent priority.

“As early as now, there should be plans for how to address the return of students who aren’t enrolling this school year,” Buenviaje said.

And Basillote said: “We need to bring our kids back to school. That is imperative.”

Villamar’s children, who are between 10 and 19 years old, needed to stop schooling once before, when both their parents lost their jobs. The oldest would have been graduating from college this year, the mother said. 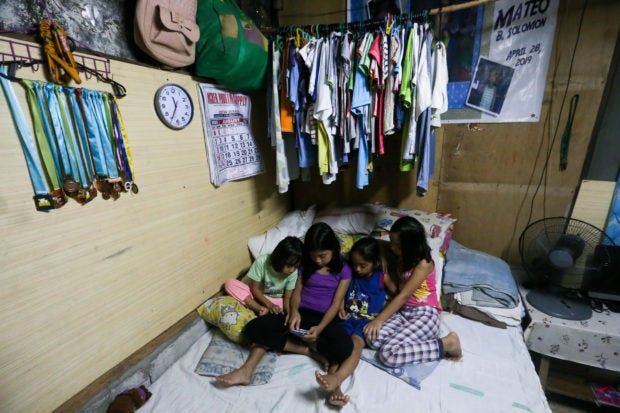 PHONE SHARING Eleven-year-old Mary Grace Solomon (second from left) shares a cell phone with her younger siblings, Mary Kris, Mateo and Mary Rose, which they will use for distance learning inside their one-room home in Barangay Muntindilaw, Antipolo City. They are a little more fortunate than 3 million students who decided to quit school due to poverty. Their mother, Robelyn Solomon, said the phone was bought with their father’s loan from Pag-Ibig ahead of the Oct. 5 opening of classes. (Photo by LYN RILLON / Philippine Daily Inquirer)

So it might have been fear of falling even further behind, she surmised, that prompted her kids’ decision to enroll anyway. The oldest had texted their teachers herself, Villamar said she was shocked to learn.

The move put her in a tight spot. She was trying to figure out a way for them to continue schooling, she said, but she could make no promises.

“I keep telling myself, my kids really want this. Who am I to stop them?” Villamar said. “But I don’t know if we can manage it.”

Education Secretary Leonor Briones has touted the enrollment turnout as an “impressive accomplishment,” and the DepEd has long surpassed its revised goal of enrolling at least 80 percent of last year’s 27.7 million students.

But the whopping enrollment rate seen in 2019 had been years in the making. It even prompted Briones to declare then that the DepEd could finally shift its focus from increasing access to education to addressing the quality of education itself.

Buenviaje said it could take a great deal of effort to lure back students who had stopped schooling, making it even more important to keep them in the system now.

Said Basillote: “The permanence of the dropout is more pronounced, especially for those of working age. Education does not happen in a vacuum. The demands of the family, the way the economy is going, could have a really negative impact on participation, especially in the higher grades.”

Those who pin their hopes on the ability of a COVID-19 vaccine to bring normalcy will likely be disappointed. Education experts agree that the effects of mass dropouts this year will be baked into the system for years to come, with or without a vaccine.

Buenviaje said even the best-case scenario — in which all the newly displaced come back in 2021—could further strain the overburdened public school system.

“The challenge there would be resources,” he said. “Do we have enough teachers for this batch?”

This could lead the teacher-student ratio to again balloon after a downward trend that had taken multiple administrations—and a herculean effort—to achieve. The pandemic-induced pauses in construction could also worsen classroom shortages, dashing any hope for school decongestion.

“Whether we like it or not, quality of education depends on the number of students per classroom,” Buenviaje said. “If before, teachers handled 40-60 students and now, even online if it reaches 70-80 in a class, the quality is compromised.”

On the flipside, this year could fast-track reforms that had been a long time coming, said Therese Bustos, Philippine director of the Assessment, Curriculum and Technology Research Center.

The famously overstuffed K-12 curriculum previously included 14,171 MELCs, or “Most Essential Learning Competencies.” The DepEd pruned it dramatically for this academic year, cutting it down to just 5,689.

“Before the pandemic, the DepEd had difficulty with reduction of the competencies,” Bustos said, adding that this year could provide a rich look into whether a streamlined curriculum boosted student outcomes.

But, she added, that would make no difference to the children who could not enroll at all.

Because well-off pupils are likelier to find ways to continue learning, the millions who will miss this school year are cut from the cloth of society’s most vulnerable: the children most in need of the safety net an education can provide.

Javiniar said these were the students shortchanged by the system — and now the “compounding interest” coming from dropping out would leave them bankrupt.

“It’s reasonable,” said Basillote, “to predict that the inequalities will widen; the differences in learning achievements between the haves and the have-nots will really widen.”

Even before COVID-19, families like Villamar’s were practiced appraisers of the daily indignities forced on poor Filipinos when they go to school.

“It’s hard for us because, honestly, it’s rare that parents can teach their kids. So many haven’t finished school ourselves,” said Villamar, whose children, if enrolled, would primarily be using printed modules at home to learn.

When she couldn’t afford supplies previously, her kids saved their “baon” (allowance) so they could pay instead—a choice between hunger and learning that no child should have to make.

Now, in the hope of saving enough to keep them in school, Villamar shredded their daily food budget to P300.

“It boils down to socioeconomic disparities,” Bustos said. “With COVID-19, the effects of those disparities become more evident.”

What can be done as early as now, according to PBEd, is to give local education officials more breathing room to make decisions. Even just removing the blanket ban on in-person classes, especially in areas with no community COVID-19 transmission, may significantly improve turnout.

As in past crises, this one presents an opportunity for a radical reimagining of public education here. Basillote pointed out that across history, countries have clawed their way out of devastated economies by reinvesting in social services.

“This is the time we need to invest in quality education and improving access,” she said.