Five times a week, barangay health workers (BHWs) of Barangay Macalong in Asingan, Pangasinan province, performed such tasks as vaccination and deworming, distributing medicines and vitamins from house to house, and monitoring the height, weight and vital signs of community members.

As COVID-19 began its gradual spread in the country in March, their work became increasingly more difficult when persons under monitoring for the new coronavirus started arriving in their hometown from Metro Manila.

Along with her colleagues, Monalisa Valera, 57, had to see to the community’s needs 24/7.

They experienced being away from their family for weeks and not being able to go anywhere near their loved ones, Valera says, adding: “We often found ourselves in tears. We badly wanted to hug them, but we couldn’t.”

In rural areas like Pangasinan, BHWs like Valera play a vital role in containing the pandemic, especially in the local government’s contact-tracing efforts.

“Because they know their neighbors well, BHWs are expected to have knowledge of the people’s whereabouts and who they have interacted with,” says Rep. Angelica Natasha Co of the Barangay Health Workers party-list group.

Thus, Co says, she finds it quite strange that the government does not recognize the significant role that BHWs can play as contact tracers at the barangay level.

“I’m not entirely against it if they want to hire additional contact tracers. But it seems like they did not consider that BHWs are actually doing the [contact tracing] as part of their house-to-house monitoring. That’s the question in my mind: Why did they not think about that and opted to spend more by hiring others?” the lawmaker told the Inquirer in a phone interview.

As of 2009, the Bureau of Local Health Development of the Department of Health (DOH) recorded a total of 196,562 accredited BHWs in the country. But recent numbers from the Department of the Interior and Local Government and the DOH range from 200,000 to 450,000 BHWs, Co said.

Because they are doing volunteer work, BHWs receive, not a salary, but an honorarium, the amount of which depends on the internal revenue allotment of every barangay. Valera, for example, gets P1,500 a month, barely enough to cover household expenses and meet the needs of her two children in college.

In the municipality of Alcantara in Romblon, the amounts range from P200 to P60 a month, according to Marites Reyes, a midwife who works closely with BHWs there. But some municipalities in the Visayas give as much as P10,000 a month to their BHWs, Co said.

In April, President Rodrigo Duterte signed Administrative Order No. 28 stating that front-line public health workers are to be granted a special risk allowance during the imposed enhanced community quarantine. Included in the public health workers specified in AO 28 are BHWs assigned to hospitals and other health-care facilities.

But Co cited reports that BHWs were not being given hazard pay despite being included in the grant.

“I think the problem is in the implementation and interpretation of the local government unit (LGU). When we receive complaints like that, we immediately contact the LGU,” she said.

What might have happened, Co said, was that BHWs were given hazard pay only when there were excess funds from the cash assistance provided by the national government.

When her party-list group communicates with concerned LGU heads, the usual response is that the budget is just for “ayuda” (assistance) to community members, Co said.

“That is, of course, very saddening because it only means that our BHWs are last in the list of their priorities,” she said. 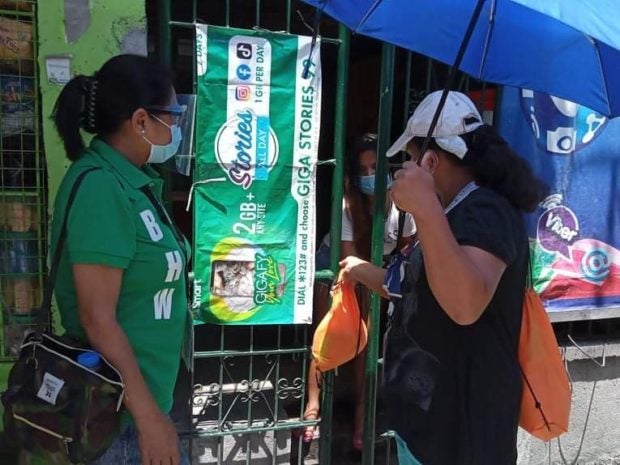 MODEL APPROACH Barangay health workers in Barangay 28, Caloocan City, distribute food packs while conducting houseto-house visits in the community. Their local health and emergency response team was able to establish a system that was later recognized as a model for COVID-19 containment, where the health workers took charge of data collection and contact tracing while ensuring that persons showing symptoms remained in quarantine. —CONTRIBUTED PHOTO

In Caloocan City, Barangay 28 Captain Edgar Galgana makes sure that BHWs and the staff of the barangay health and emergency response teams (BHERTs) are receiving enough support and compensation so they can perform their job well.

“They are complete with personal protective equipment and vitamins before they leave [to do fieldwork]. I treat the health workers the same way I treat the patients because if I will not provide for them, they might not do ocular inspections or even go outside,” Galgana said.

Galgana said Barangay 28 — population 30,968, per a 2015 census of the Philippine Statistics Authority — was able to develop a model COVID-19 response that has been recognized by City Hall.

From just two cases, the number of infections in the barangay spiked when it was placed under general community quarantine. The alarming rise in the number of cases — 167 as of Sept. 7 — prompted Galgana and the BHERTs he had formed to plan house-to-house visits although the idea was frowned upon by their LGU.

“I do not believe in [phoning] when it comes to checking up on patients,” he said.

Thus, instead of remote monitoring, the team made databases, conducted a daily observation of body temperatures, and ensured actual conversations with residents.

This is because, Galgana said, based on their study using that approach, people tended to go out of their houses because no one from the government bothered to check on them.

When the local government heard of Barangay 28’s practice and inquired about it, the team presented its papers and reports with the help of its experts. And from their model, Galgana said, the city was able to develop an enhanced formula on how to manage the COVID-19 response better.

“The BHERT was really instrumental in combating the COVID-19 cases here,” Galgana said. “From that experience, we learned that strengthening the barangay health and emergency response team is a must, especially in terms of inclusion in the budget and creating local ordinances.”

In 2019, Co filed House Bill No. 3985, or the Barangay Health and Wellness Reform, which primarily lobbies for a standard honorarium of at least P3,000 a month, medical assistance, and health, accident and retirement benefits for BHWs.

The bill is pending at the committee level and Co anticipates a debate on the minimum amount of the honorarium.

For Valera, who knows that being a BHW is an act of volunteerism, just being able to help her neighbors is enough to give her a sense of fulfillment, even happiness.

But she hopes that the government and the public would recognize the efforts of BHWs and give them the benefits they deserve.

Galgana said training and support from the national government were needed apart from compensation.

“Continue to train, empower and equip us with knowledge, especially how to respond in times of crisis like this,” he said. “Instead of continuously giving us [barangay officials and staff] threats, boost our morale and capabilities. Boost our strength to act as one since that’s the government’s call: to act as one.”