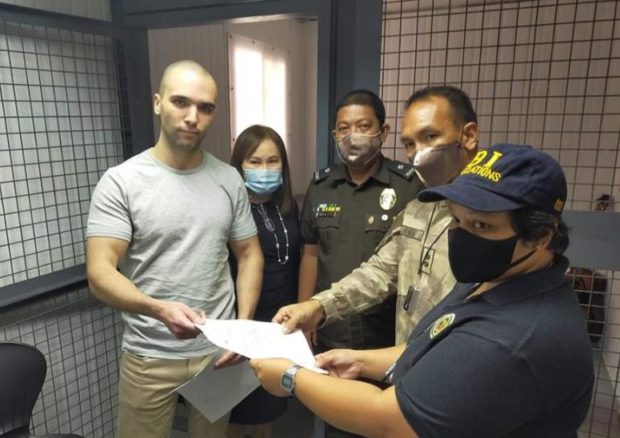 STILL LOOKING BEEFY: Bureau of Corrections Chief Gerald Bantag turns over to the Bureau of Immigration the custody of Lance Corporal Joseph Scott Pemberton. The BI will implement its 2015 deportation order. Photo from BuCor

MANILA, Philippines — Convicted US Marine Lance Corporal Joseph Scott Pemberton is a step closer to freedom after he was turned over by the Bureau of Corrections to the Bureau of Immigration.

Pemberton was granted absolute pardon by President Rodrigo Duterte, thus rendering moot and academic the questions on the completion of his service of sentence.

Last Thursday, the Department of Justice already received a copy of the absolute pardon from Malacañang. Justice Secretary Menardo Guevarra then transmitted the document to the Bureau of Corrections, who then issued the release order.

On Friday morning or exactly 11:52 a.m., BuCor already turned over Pemberton to the Bureau of Immigration. The process is technically a change of agency guarding Pemberton, who remains in detention inside Camp Aguinaldo.

The BI will then implement its 2015 deportation order.

Justice Secretary Menardo Guevarra said the National Bureau of Investigation is already processing the clearance of Pemberton. An NBI clearance is one of the requirements in the deportation proceeding to make sure that the subject of deportation has no other pending cases in the country.

It was the NBI Interpol chief and staff from the NBI Clearance Division who went to Camp Aguinaldo to get the necessary details from Pemberton, including fingerprints and photos.

To date, the NBI has finished checking and Pemberton has no other pending cases in the country.

Aside from NBI clearance, Immigration acting spokesman Melvin Mabulac said they needed the travel details, which include the airline, time, date of his flight.

For now, Pemberton’s lawyer Atty. Rowena Garcia-Flores said there are no flight details yet.

Pemberton’s camp is also waiting for the result of his swab test.

Guevarra said they hope that the whole process of deportation will be completed this weekend.[ac]