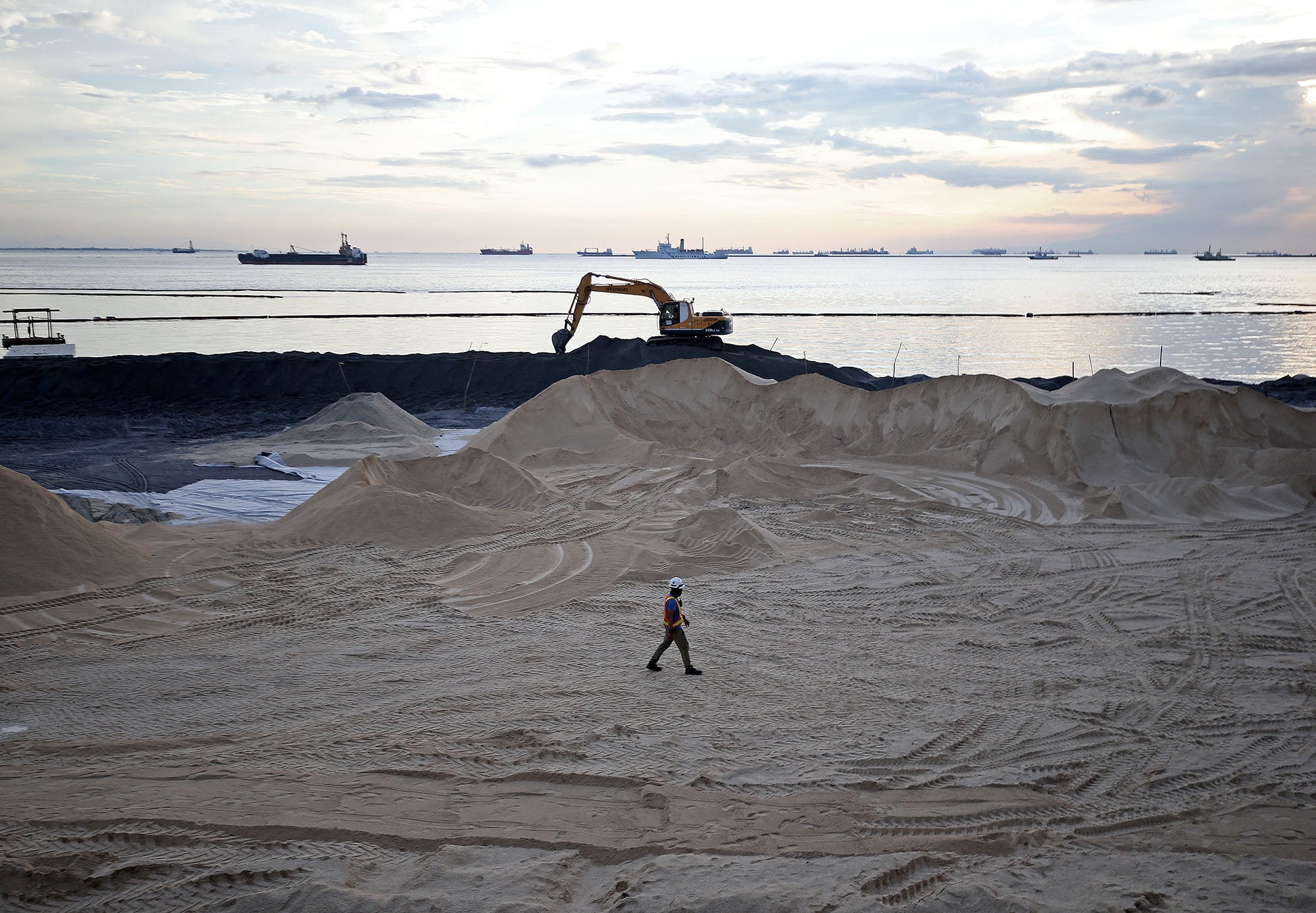 MANILA BAY ‘BEACH’ A worker walks across the crushed dolomite that is being spread at a portion of the Manila Bay shoreline near the US Embassy amid controversies on its costs and health safety. —RICHARD A. REYES

MANILA, Philippines — The Department of Environment and Natural Resources (DENR) on Thursday said it had collected for processing its own samples of the dolomite sand now being poured along Manila Bay to ease concerns over its toxicity to humans and the environment.

In an interview with the Inquirer, Environment Undersecretary Benny Antiporda said the Department of Public Works and Highways (DPWH), the implementor of the beach nourishment project, had already had the sand analyzed by an unnamed third party last year.

But the DENR decided to have its own analysis of the sand, with the results expected within one to two weeks, to ease worries about the sand’s effects on humans and the environment.

“This is to make clear that we pay heed to the people’s clamor,” Antiporda said. “We want to [assure] everybody that everything they [are assuming] about the project—that it is corrupt, that it is unsafe—is wrong, because we are doing our part here.”

The DPWH has not released the analysis that should have been done by the agency’s contractors, Las Piñas-based MarkBilt Builders and Dragonhart Construction Enterprises, when they were awarded the P389-million project.

The DENR initiated its own analysis as toxicologists disputed the claim of Environment Secretary Roy Cimatu that dolomite sand in itself was not harmful and that only its crushing was considered dangerous to human health.

In a webinar on Thursday, Dr. Rommel Aquino said dolomite, like all minerals, were known to have trace heavy metals that were toxic to the human body.

Even if the dolomite along Manila Bay is already in processed form, its constant exposure to elements could still create respirable dust that could cause respiratory ailments and even cancer, silicosis and other autoimmune diseases.

“They have the burden to prove that the sand is no longer toxic. It is not the job of the civil society [groups] to do that for them,” he said. “This is their obligation in protecting nature.”

Two other groups, Stewards and Volunteers for the Earth Philippines and Samahan ng Progresibong Kabataan, also issued a joint statement on Thursday demanding that Antiporda resign.

The group said the “utter monstrosity” of the project and waste of public funds in a pandemic and economic recession was “enough for Antiporda’s head to roll” because his brazen defense of the project was “equally shameless.”

But Antiporda, an appointee of President Duterte, shrugged off the demand and said: “These people want me to resign but they have no moral ascendancy in the Manila Bay. They are not the ones putting in the work.”

Antiporda said he would not hesitate to consider resignation “If it [were made by] people like Tony Oposa then I would consider it because they are the kind of people who have a say in this issue. But in general we’re just doing our part here.”

The DENR official was referring to lawyer Antonio “Tony” Oposa, a 2009 Magsaysay Awardee, who led and won a 10-year battle to have 13 government agencies to clean up Manila Bay.

The landmark continuing mandamus judgment issued by the Supreme Court in 2016 ordered the DENR, the DPWH and 11 agencies to clean the bay and report to the court every 90 days, which is also the rationale behind Mr. Duterte’s marching orders to rehabilitate the historic bay.