KORONADAL CITY — The medical community in South Cotabato has recommended reverting the province back to restrictive enhanced community quarantine (ECQ) status to avoid the collapse of its health-care system as some 200 health workers exposed to the new coronavirus disease (COVID-19) have been placed on isolation.

In a Sept. 9 letter to Gov. Reynaldo Tamayo Jr., Dr. Rachelle Uy, president of the South Cotabato Medical Society (SCMS), said the group was alarmed by the rapid surge of confirmed COVID-19 cases in the province, which has been under modified general community quarantine status for months now.

“We believe that we need to do drastic measures to slow down the transmission of the virus and to prevent our hospital system from unwanted collapse,” Uy said in the letter made public on Thursday. “[We are] asking for an ECQ to halt the movement of people and slow down, if not prevent, the further spread of the virus in our locality.”

Of the 200 quarantined health-care workers, at least 131 are from the capital city of Koronadal and the regional center of Soccsksargen (South Cotabato, Cotabato, Sultan Kudarat, Sarangani and General Santos). SCMS records show that of the 131 on quarantine, 36 are from the City Health Office, which has only 55 personnel.

In Polomolok town, 49 employees of Bontuyan Medical Clinic and Hospital, and 20 from Howard Hubbard Memorial Hospital have been quarantined, the medical society reported. 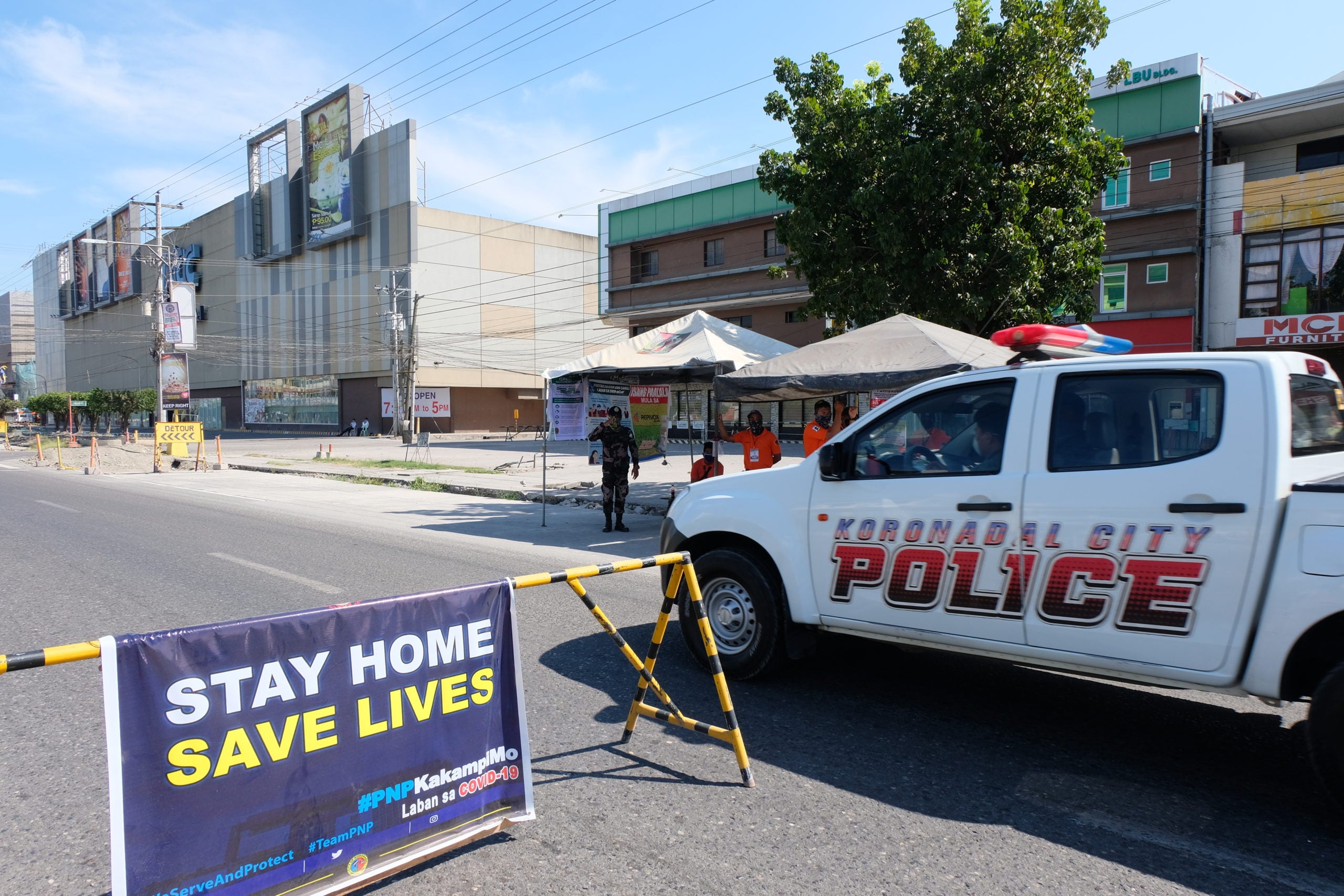 RESTRICTING MOVEMENT In April, when Koronadal City was placed on tight lockdown, police checkpoints were set up in strategic areas in the South Cotabato capital to ensure that residents followed health and security protocols to stop the spread of COVID-19. —BONG S. SARMIENTO

In the entire region, South Cotabato had recorded the highest confirmed COVID-19 cases, at 231, as of Wednesday night, the Department of Health in the region said. It was followed by General Santos City with 132 cases; Sarangani, 107; Sultan Kudarat, 87; Cotabato City, 84; and Cotabato, 73.

Soccsksargen recorded 714 COVID-19 cases with 325 considered active. It had 16 deaths and 372 recoveries.

Tamayo backed the recommendation of the medical community to revert to ECQ, saying he was also concerned over the collapse of the health-care system if cases would continue to rise.

“But I can’t impose an ECQ because according to the IATF (Inter-Agency Task Force for the Management of Emerging Infectious Diseases), only the mayor can declare such if 25 percent of the barangays are affected with the virus,” the governor said.

Dr. Rogelio Aturdido Jr., South Cotabato health chief, agreed that an ECQ should be declared, particularly in Koronadal City, where the strictest form of health and security monitoring and lockdown would be imposed to keep people in their homes.

“It’s scary if the close contacts have not been traced. We have walking time bombs in our midst with these asymptomatic individuals,” Aturdido said.

Citing data released on Wednesday, Aturdido said 57 percent of the confirmed COVID-19 infections in the province had been contracted locally, particularly from the fish port complex in nearby General Santos.

Information released by the city government on Tuesday showed that 21 of 27 Koronadal residents who tested positive for the virus had a history of travel to the fish port, which was shut down from Sept. 2 to Sept. 5 for decontamination and to prevent the spread of COVID-19. 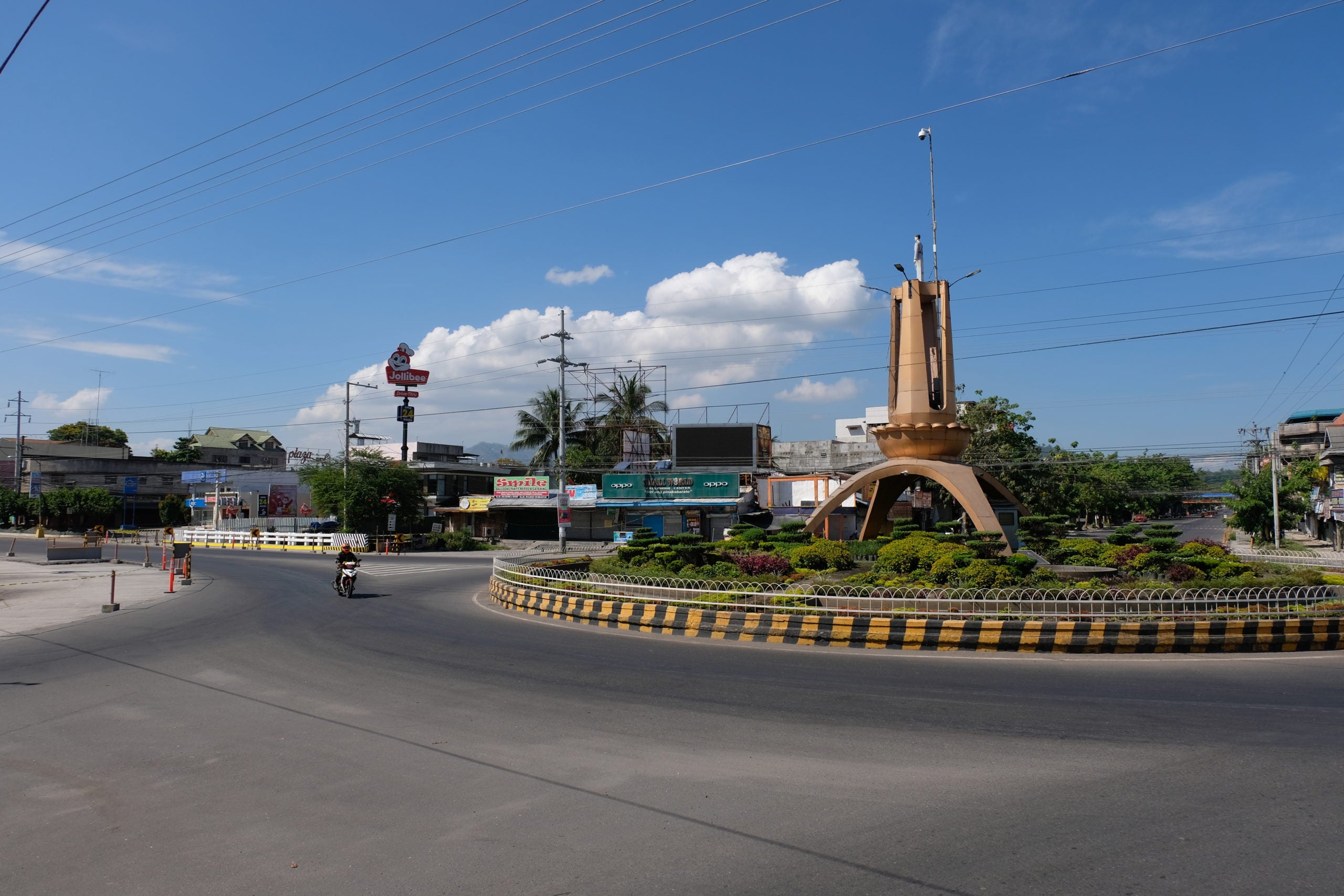 LONE RIDER The usually busy rotunda of Koronadal City is almost empty in this photo taken during a community lockdown in April. Doctors in South Cotabato want the province, including the capital Koronadal, to be placed under the strictest quarantine status due to the surge in infections. —BONG S. SARMIENTO

Koronadal Mayor Eliordo Ogena did not agree with the medical society’s recommendation for the city to revert to a hard lockdown.

“We will not put the city under another lockdown, but there will be more restrictions in the movement of people,” Ogena said on local radio.

He said “wide consultations” with different sectors, among these tricycle drivers, construction workers and vendors, had been conducted before he decided to reject calls to put the city on lockdown.

Ogena said the COVID-19 infection was still below 25 percent of the city’s 27 villages, which did not warrant placing the area under ECQ.

Rep. Cullamat tells military not to use daughter’s remains for propaganda